A Closer Look At Listed REITs 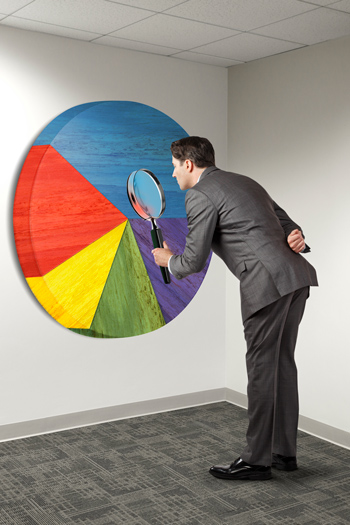 Joseph P. Smith earned his MBA from the University of Pennsylvania’s Wharton business school in the late 1990s, a hot time for the tech sector. Companies such as Pets.com were blowing millions on a single Super Bowl commercial, attracting talented employees and major investors. Smith, now the co-chief investment officer with CBRE Clarion Securities, shunned high-flying tech stocks and went a different route: investing in REITs. Back then, the questions that he fielded from major institutional investors revealed a general lack of familiarity with the asset class.

“What is a REIT? Is it a gimmick? Is it a tax thing? That’s for retail investors, right?”

However, like Smith, many of today’s investment decision-makers have grown up with stock exchange-listed REITs and understand how they work. It signifies a change from the past, when investors large and small seemed to struggle with the idea of owning real estate as a stock, rather than holding the deed to a house or building. Today, listed REITs are now considered by many to be an essential part of any balanced investment portfolio, including those of family offices, defined benefit and defined contribution pension plans, endowments, and other institutional and individual investors.

Historically, major investors tended to get their real estate exposure through direct investment in assets and managed funds. Today, though, REITs are increasingly attracting institutional investors from across the globe as real estate is recognized as a fundamental asset and REITs are recognized as a low-cost, liquid way to access real estate exposure. It is estimated that REITs now own some 15 percent of the nation’s commercial real estate assets, with institutional investors owning a significant majority of REIT shares on behalf of individuals, according to NEPC LLC, a Boston-based investment-consulting firm that serves over 300 retainer clients with total assets topping $900 billion.

“We’ve certainly seen an increase in the amount of institutional investors that are adding REIT allocations to their core real estate portfolios,” says Sean Ruhmann, director of private markets research for NEPC.

“The acceptance of REITs by [investment] plan managers and consultants has steadily increased since the late 1990s, and we continue to see new plan mandates every year,” says Jerry Ehlinger, a managing director with Heitman who specializes in public real estate securities.

Data on pension plans and other institutional investors back that claim up, although statistics on investment plans can be murky. For example, an analysis of numbers provided by Preqin, a firm that tracks investment in alternative assets, found that on an asset-weighted basis, 54 percent of pension funds that hold real estate currently gain some exposure to real estate through listed REITs. And consider target-date funds, the fastest-growing subset of defined contribution investment plans in the United States.

NAREIT estimates that whereas about a quarter of target-date funds had exposure to REITs 10 years ago, more than 90 percent do now. Eight of the 10 fastest-growing target-date fund managers use REITs in their portfolios, according to Strategic Insight, a research firm that focuses on mutual funds. Well-known investment product providers such as UBS, BlackRock, J.P. Morgan, PIMCO, Allianz Global Investors, Alliance Bernstein, Invesco, American Century and Schwab have put significant REIT allocations into their target-date funds.

So what’s driving the popularity of REITs with these large investors? A growing body of research regarding their performance certainly helps.

“We have data that substantiates the historical outperformance of U.S. REITs compared with most other ways of investing in U.S. real estate,” says Meredith Despins, NAREIT’s senior vice president for investment affairs and investor education. “That’s very compelling.”

For instance, a NAREIT-sponsored study released this year by Wilshire Associates examined REIT allocations in target-date funds. Wilshire found that for the 40-year period covering 1976 to 2015, allocations to U.S. or global listed Equity REITs and property companies increased expected long-term investment returns and portfolio diversification. The study suggests an allocation of up to 16 percent in U.S. listed Equity REITs is optimal for investors planning to retire in 40 years, or 7 percent for an investor who just retired in 2015, according to Wilshire.

“There’s no question” REITs are a sound investment that diversify a portfolio, according to Brad Case, NAREIT’s senior vice president of research and industry information.

Then there are the specific attributes of REIT-based real estate investment.

For one thing, stock exchange-listed REITs are liquid, meaning investors can get in and out of their positions with ease. That’s a major plus for Judy McMahan, portfolio manager for real assets with UPS Investments, which manages the pension fund for employees of the UPS delivery service. 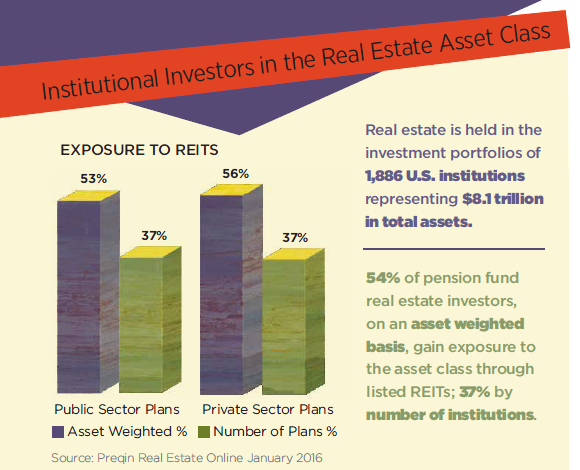 “Given where we are in the cycle, we do not want to be committing dollars to funds and having significant unfunded commitments,” she says. “By investing in REITs, we still have real estate exposure, but we have easier access to our capital.”

The liquidity factor means that REITs fit well in tandem with allocations to direct real estate ownership, according to Ehlinger.

Ruhmann cites the size, quality and diversity of REIT assets as a compelling selling point. Investors also point out that REIT management teams are considered seasoned and smart. Ehlinger notes that “astute” leadership from 2008 to 2009 during the financial crisis helped REITs gain credibility in the investing world.

On the other hand, REITs’ perceived volatility and correlation to the broader market do give some investors pause.

However, Ehlinger indicates those worries are overstated.

“REITs get priced daily based on live buyers and sellers, so they almost certainly will have greater volatility than the same real estate portfolio valued by appraisal quarterly or annually,” he observes. “From a realistic perspective, since 90 percent of the value of a REIT is in the real estate they own, it is almost impossible for the true underlying value of REITs to be more volatile than a similar portfolio of private assets on average.”

Given the advantages of investing in real estate via REITs, industry observers say they wouldn’t be surprised to see allocations dedicated to REITs increase in the future.

“It seems fair to speculate that most investment portfolios are under-allocated to real estate and REITs,” says Michael Knott, director of U.S. REIT research with Green Street Advisors. “There is likely a longer-term upward bias in REIT allocations.”

Knott’s not alone in his opinion.

“In our view, REITs are justified and deserve a permanent allocation in an investment portfolio,” says Jay Leupp, managing director of Lazard Asset Management, which manages more than $160 billion of assets globally

that span a broad spectrum of asset classes. “The primary debate is what that allocation should be: 5 percent, 10 percent, 15 percent, 20 percent.”

In terms of what may be holding back more institutional investors from gravitating to REITs, McMahan suggests inertia could be a culprit.

“Many institutional investors tend to concentrate on fund investing for a number of reasons, including [that] it’s a familiar strategy, whereas understanding REIT investing is more difficult,” she says.

Even so, for Smith of CBRE Clarion, the difference in the dialogue with institutional investors about REITs from when he started to now is stark.

“Now, more often the question is how much should an investor allocate to REITs? It has come full circle.”