Editor’s note: When REITs invest in new development projects, the benefits extend beyond the companies and their tenants and shareholders. Around the country, REITs are building everything from medical centers to offices to retail centers that help enhance the quality of life for surrounding communities.

In some places, they’re starting from scratch. In others, they’re renovating existing properties that have fallen into disrepair. Whatever the case may be, REIT development projects can mean new jobs, better infrastructure, increased economic activity and other improvements.

The new series “REITs: Reshaping  Communities for the Better” tells those stories. 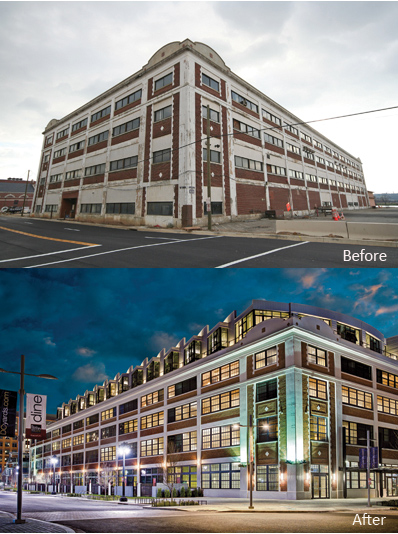 Fifteen years ago, the 48 acres in southeast Washington, D.C., now known as The Yards was home to an expanse of decaying industrial facilities.

Situated next to the Washington Navy Yard along the banks of the Anacostia River, the site will eventually be occupied by thousands of residential units and more than 2 million square feet combined of office and retail space.

In the early 2000s, Eleanor Holmes Norton, the Democratic congresswoman who has represented the District of Columbia in the House of Representatives for the last 25 years, championed the idea of bidding out the land to the private sector for mixed-use development. “I couldn’t bear that there was a wasteland five minutes away from the Capitol,” she says.

The thorny bidding process led to a 500-page proposal from Forest City Realty Trust, Inc. (NYSE: FCE.A) that laid out a vision of what the area could become, according to Forest City Washington, Inc. President Deborah Ratner Salzberg. “I have some photos left from those days – it was just abandoned buildings,” she says, recalling the first time she toured the land.

Forest City reached a deal with the federal government in 2004 to buy and develop the site. The company estimates it will invest nearly $2 billion on the project once complete. In addition to helping transform the neighborhood, it is estimated that The Yards will contribute more than $60 million annually in new tax revenue to the District of Columbia. And there’s more to come. Forest City has completed five of the 25 buildings expected from the full build out, and the company is planning for The Yards to remain an active development project for another 15 to 20 years.

“It will all be worth it,” Ratner Salzberg says. “The Yards is the poster child for public-private partnerships.”

Forest City persisted in developing the land through the recession and financial crisis of the late 2000s. The project has come with its own set of unique challenges and mandates, too.

For starters, every building in the development has to go through an approval process involving 35 different government agencies.

Furthermore, remnants of the past—cannons used in the Civil War, a sentry tower and wall, factory smokestacks—can be found throughout The Yards. They’re there for more than just adding charm. The entire site lies within the Washington Navy Yard Historic District on the National Register of Historic Places, so any development done by Forest City has to comply with the directives of the District of Columbia State Historic Preservation Office.

Ratner Salzberg notes that the company actually embraces that part of the development: “We love old buildings, they just have an atmosphere.” 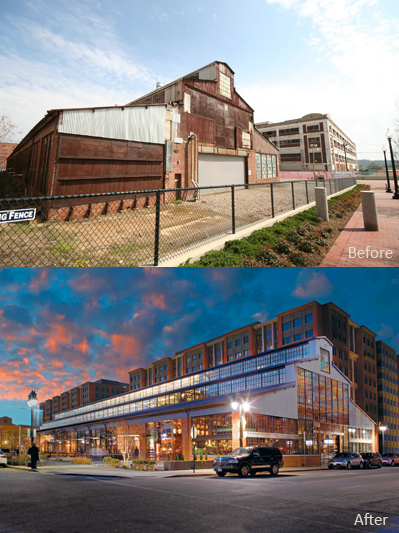 In the early 19th century, The Yards site played host to a wharf, a sugar refinery and a brewery. As the Washington Navy Yard grew into a hub for the U.S. naval fleet, warehouses and factories sprung up in the surrounding area. That all started to change after World War II, though, as on-site manufacturing work was phased out through the 1960s.

After the facilities surrounding the Navy Yard were shuttered, Holmes Norton says immediate efforts to convert the land for other federal agencies fell flat. When she started looking into alternative uses, she came to a surprising conclusion.

“I found that it was perhaps the most valuable piece of undeveloped land on the East Coast,” she says. “This was lying fallow.”

Opening up the federal land for private development required an act of Congress (literally). Once the move was approved, however, a slew of “hungry” developers decided to bid on the property, according to Holmes Norton.

“It says a lot about Forest City that it overcame that kind of competition to become the master developer on this land,” she says.

“Large-scale, mixed-use projects are not for the faint of heart. At the time there were only a handful of developers in the country that could take on something this complex,” she says. “I am sure that’s why we were able to win this project.” 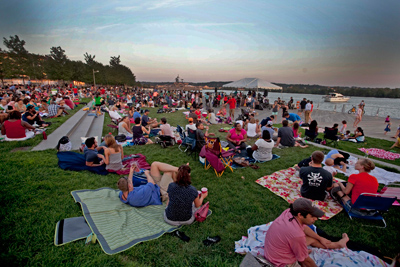 Forest City also sought to make The Yards stand out by populating its storefronts with local and regional businesses. Visitors might find the occasional Potbelly sandwich shop or GNC store, but the vast majority of tenants come from the ranks of area entrepreneurs.

For example, Vida Fitness opened one of its six Washington-area gyms in the Twelve12 building of The Yards. The state-of-the-art health club includes exercise facilities, a spa, a salon and a rooftop pool and deck. Across the street from Vida sits Bluejacket, a microbrewery in the portfolio of Alexandria, Virginia-based Neighborhood Restaurant Group. (In a nod to the neighborhood’s history, the name Bluejacket comes from a Navy term for an enlisted person.)

Forest City even goes so far as to recruit independent business owners to set up shop in The Yards. Ice Cream Jubilee stands as one of its greatest successes. Artisanal ice-cream maker Victoria Lai sells inspired flavor creations such as Citrus Sichuan Peppercorn, Sweet Potato Pie and Mexican Hot Chocolate to lines of customers that stretch out the door of her shop in the summer months.

Lai, a former presidential appointee to the Department of Homeland Security, started making ice cream in her apartment in 2009. She eventually began selling some of her flavors in grocery stores and restaurants.

“I wasn’t thinking about opening a storefront at all,” Lai says. 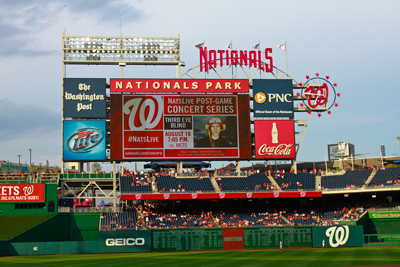 Days after winning a local ice cream competition, Lai received an invitation from Forest City to tour The Yards and discuss the possibility of opening a shop. Lai says she was familiar with Forest City’s reputation for commercial development; seeing the neighborhood helped convinced her to take the plunge.

“It was like a respite away from the rest of the city,” Lai recalls. “I knew at that moment if I was going to spend 80 hours at any job, I wanted it to be in this place where it’s so beautiful.”

She opened her first store in The Yards in 2013, which employs between 18 and 20 people in the summer and six workers in off-peak months. Ice Cream Jubilee consistently lands on lists of the best ice cream shops in the United States, and Lai now plans to open more locations throughout the area.

“I think it helps that more people are coming down to this area from Washington, D.C., and from outside the city. Business is booming."