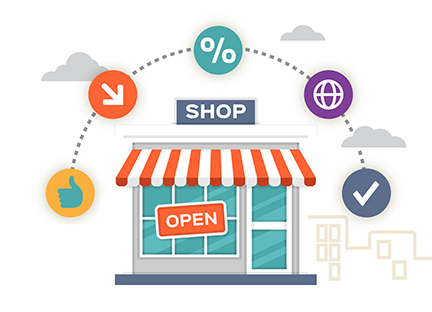 When people started plugging into the World Wide Web in the early 1990s, the vast universe of potential applications for online technology became clear—even if we weren’t exactly sure what form they would eventually take. Hooking up the modem to chat with Yankees fans or car collectors around the world was a sign of cool things to come; yet, our digital lives essentially ended there.

Two decades later, consumer behavior continues to change, and the options to procure goods and services have mirrored those behavioral changes. Today, an online presence is vital to participate in our global system of commerce. That applies to both buyers and sellers. Websites and apps provide more than just information or channels of communication.

The Department of Commerce estimated that in the third quarter of 2016, U.S. e-commerce retail sales totaled $101.3 billion. That marked an increase of 4 percent from the previous quarter and a gain of nearly 16 percent from the same period in 2015. E-commerce as a selection tool and distribution system will continue to play a larger and larger role in the business plans of nearly all retailers (and vice versa – bricks-and-mortar alternatives will play a larger role in companies that previously had no such option). Whereas the Commerce Department data show that e-commerce sales accounted for roughly 2.5 percent of all retail sales at the start of 2006, that share had climbed to approximately 8.5 percent as of the third quarter of 2016—hardly the end of shopping as we know it, but critical to address and incorporate into every business plan.

The effect of changing consumer behavior on the business of retail continues to grow and shows no signs of slowing. Experience is more important than ever before, demands for continually higher service levels that weren’t even possible some years back are vital for shopping center owners to consider, and retailers of all types search for the magic formula to identify and then satisfy increasingly fickle customers.

Some major brands have disappeared. Others are still working to figure out exactly where they fit in the new landscape. A few have settled on business plans that work particularly well, and that’s encouraging.

Like all bricks-and-mortar retail companies, Federal Realty Investment Trust (NYSE: FRT) is committed to adapting along with those retailers. The right location still works as the best hedge in creating demand that exceeds supply. Not an easy feat today. There is far more retail leasable space per capita in the United States than in nearly every major country. Particular real estate locations need to be compelling.

But it’s more than that. Flexibility in format and in the merchandising of shopping centers through a relevant tenant mix are factors that are more important than ever, particularly in a macro environment where supply arguably exceeds demand and where retailers are experimenting with the perfect number, size and shape of their bricks-and-mortar offerings.

The changing landscape in the retail industry will reward the retail real estate companies that identify and court tenants positioning themselves for relevance in their vision of 2020 and 2025, not the 1990s. Retail real estate companies that thrive in this omnichannel environment will recognize that the investments they are making right now—in terms of both time and capital—will determine whether they’ll be able to grow their rents in the decades to come.

Don Wood is president and CEO of retail REIT Federal Realty Investment Trust. He was the 2012 NAREIT Chair.