Atlanta native and city councilman Kwanza Hall looks at his hometown and sees a city that is “ripe for growing to be an international icon.” 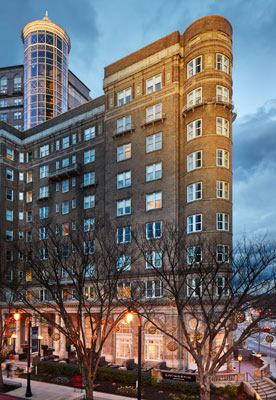 The councilman lights up when asked about what makes Atlanta special to him, expounding on the city’s thirst for innovation and its flourishing arts and culture. Yet, he says a deep reverence for history lies at the city’s core.

“We have innovation running right up against historic preservation,” Hall says. “There’s a dynamic energy that is rooted in our past, but it’s so bright in terms of where it can take us in the future.”

Hall points to the Georgian Terrace in the city’s Midtown district as an embodiment of that confluence of old and new, “a quintessential reflection of Atlanta’s DNA.” The historic hotel has changed ownership multiple times since opening in 1911. Lodging REIT Sotherly Hotels Inc. (NASDAQ: SOHO) purchased the property in 2014, intent on reinforcing its status as a local landmark and marquee destination for visitors to the unofficial capital of the American South.

“Our overall mission is to deliver a local experience for our guests so that when they come and stay here, they realize that they’ve had a true Atlanta experience,” says Drew Sims, CEO of Sotherly Hotels. 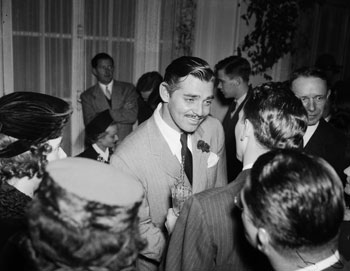 Williamsburg, Virginia-based Sotherly owns a portfolio of 13 properties, and the Georgian Terrace falls right in the company’s sweet spot: boutique hotels in the central business districts of Southern cities. It opened as a 10-story hotel in 1911 at the corner of Peachtree Street and Ponce de Leon Avenue, the site of the former home of Atlanta mayor Livingston Mims. Sixteen years later, the Fox Theatre opened directly across from the hotel, marking the start of a symbiotic relationship between the two landmarks that continues today. Over time, the Georgian Terrace developed a reputation as Atlanta’s most famous hotel, playing host to celebrities and dignitaries such as Clark Gable, Jimmy Carter, Elvis Presley, Walt Disney, Charles Lindbergh and F. Scott Fitzgerald.

A local developer acquired the property in 1989 and turned it into luxury apartments. That included adding a 19-story tower to the original hotel structure in 1991. However, the property was converted back to a hotel in 1997.

Sotherly tracked the Georgian Terrace for approximately 10 years before it came back on the market in 2013, according to Sims. In addition to the hotel’s Midtown location, Sims says its history and unique features made it a priority for Sotherly. 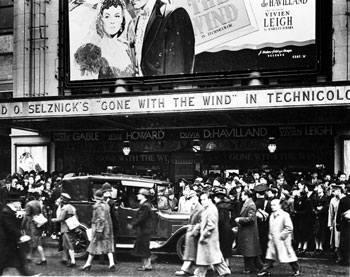 While most of the other bidders at that time intended to return the property to residential usage, Atlanta officials preferred Sotherly’s vision of restoring the hotel back to its past stature, he says.

“The Georgian Terrace is a big part of the community,” Sims says. “Over the years, generations of Atlantans have had their weddings, their bar mitzvahs, their birthday parties here. It’s very much a part of the history of Atlanta.”

The initial winner of the bidding process, a local developer with designs on converting the hotel to apartments, was unable to perform up to the terms of the contract. After the winning bid fell through, Sotherly purchased the property in 2014 for $60 million. 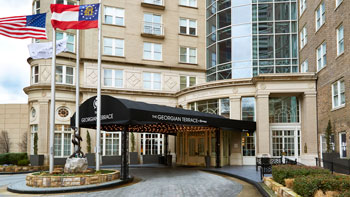 Once it acquired the property, Sotherly immediately took to putting its own stamp on the hotel, including investing roughly $8 million in refurbishing the rooms.

“We wanted to put a modern twist on the Southern lifestyle,” Sims recalls.

Part of that included reinvigorating multiple food and beverage outlets. Located in the hotel’s original lobby, Livingston Restaurant + Bar features popular outdoor seating and a pre-theater menu for patrons of the Fox Theatre. Sotherly hired a new chef to remake the menu, transitioning from West Coast cuisine to Southern fusion—new takes on down home classics and a menu of specialty drinks.

• The hotel has 326 guest rooms and a parking garage with nearly 700 spaces.
• Part of the Fox Theatre Historic District and a member of Historic Hotels of America.
• Approximately 170 employees make up the Georgian Terrace staff.
• The hotel hosts approximately 100 wedding receptions per year.
• The guestrooms at the Georgian Terrace average more than 800 square feet.

Sotherly also hired a “Sothern Host,” which Sims distinguishes from a traditional concierge. He describes the host’s role as “providing service and solving problems” for guests.

“The Sothern Host actually has a lot of authority to do whatever it takes to make the guests happy,” Sims says.

Sotherly’s hospitality has ingratiated the company with more than just the guests of the Georgian Terrace. Kevin Green, president and CEO of the Midtown Alliance, a non-profit group formed in the 1970s to help revitalize the district, credits Sotherly for “doubling down” on the hotel’s legacy and contributing to the growth of the neighborhood. 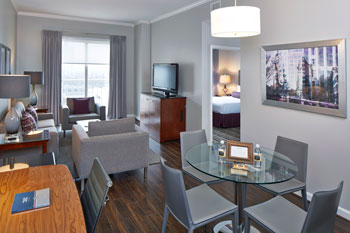 “We see an organization that has gotten involved in the community,” he says.

Hall, meanwhile, says Sotherly’s investment in the hotel has encouraged greater business activity in the area.

“In a globally competitive environment, you have to be able to offer a place where capital wants to go,” he says. “The investment Sotherly chose to make here has helped to catalyze and revitalize the entire area.”

The investment in the flagship property has performed well for its owner, too. Sims notes that within a year of acquiring the Georgian Terrace, Sotherly had improved the operations and profitability of the hotel to the point that the company could cover its entire investment with a low-cost mortgage.

“We’ve gotten all of our capital out, and we have a nice low-cost loan that allows this property to be a cash cow for the next decade,” he says. “This has been a home run for Sotherly Hotels.” 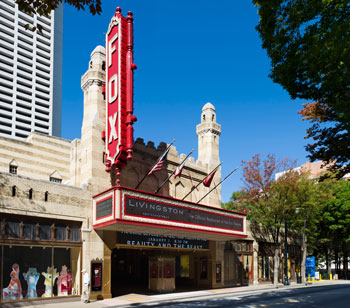 Since the Fox Theatre opened on Christmas Day in Atlanta in 1929 with a screening of the Disney cartoon “Steamboat Willie,” the 250,000-square-foot performance venue has enjoyed a symbiotic relationship with its neighbor across Peachtree Street, the Georgian Terrace.

“When our guests come to see a show at the theatre, their experience is enhanced by everything going on at the Georgian Terrace,” says Allan Vella, the Fox Theatre Inc.’s president and CEO. “We’re a special corner of Atlanta.”

Each year, “Fabulous Fox” hosts more than 250 shows and approximately half a million visitors. Performances include everything from ballet to Broadway shows like “The Phantom of the Opera” to comedians such as Jerry Seinfeld and Chris Rock. Popular musical artists ranging from Liberace to Madonna to Elvis Presley have graced the stage over the years. 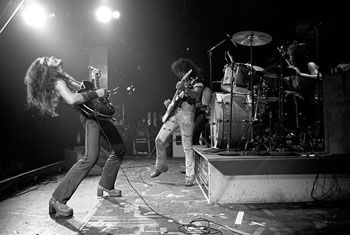 Aside from the performers and out-of-town theatre goers who stay at hotel, Fox Theatre patrons often crowd the Georgian Terrace’s bars and restaurants before and after shows. The hotel and theatre also work together to host major events for national corporations and prominent Atlanta companies, with the Georgian Terrace staff providing the catering for gatherings at the Fox Theatre ballrooms.

According to Vella, the relationship between the hotel and theatre “really took off” when Sotherly Hotels entered the picture in 2014.

“Once they took over, it really reached a level of professionalism that we were seeking and hoping to partner with,” he says. “Sotherly met and exceeded what we needed for our guests, so the relationship has been great ever since.”