Research says pension funds are leaving returns on the table by under-allocating to REITs.

As baby boomers grow older, an estimated 10,000 Americans are retiring every day. That is putting mounting pressure on defined benefit pension plans to provide the steady income and capital appreciation necessary to meet their financial obligations.

Of the $24 trillion in retirement assets in the United States as of the end of 2015, about a third belonged to public and corporate pension plans. Real estate has long been a staple of these defined benefit funds’ portfolios, but are those allocations producing enough bang for the buck?

Nareit-sponsored research from Toronto-based investment consultant CEM Benchmarking indicates they are continuing to fall short in part due to underweighting REITs.

How Many Pension Funds Invest in REITs? 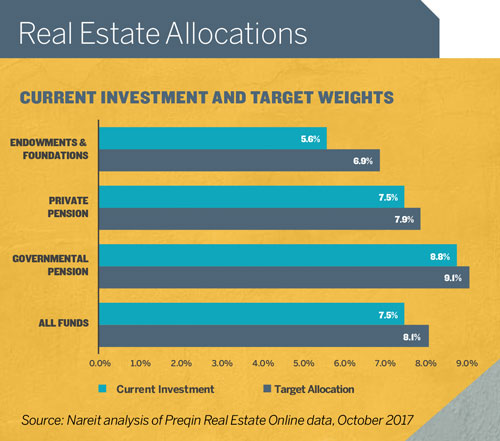 According to a Nareit analysis of data from Preqin, a financial research firm that tracks investment in alternative assets, some level of REIT investment is broadly based among government and private pension funds, endowments and foundations, which have a little more than $600 billion invested in real estate in the aggregate. More than 35 percent of these investors, on an asset-weighted basis, use REITs as part of their real estate portfolio. That equates to 40 percent of pension funds by number.

How Big Are Institutional Investors’ Allocations to REITs?

The data are a little murky. However, the Preqin numbers analyzed by Nareit show that of those that invest in real estate,

In the entire universe of pension funds, endowments and foundations, REITs comprise approximately 19 percent of the total investment in real estate.

The updated CEM study suggests they are not. 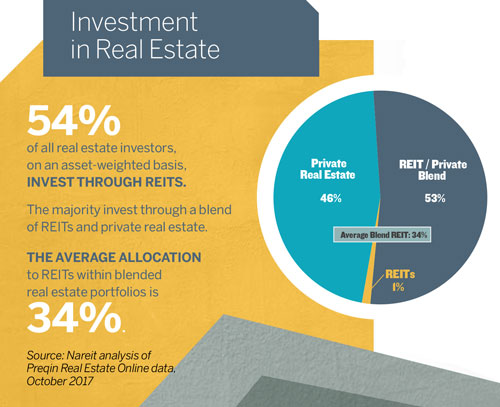 Anecdotally, asset managers say their experience matches up with the CEM research. 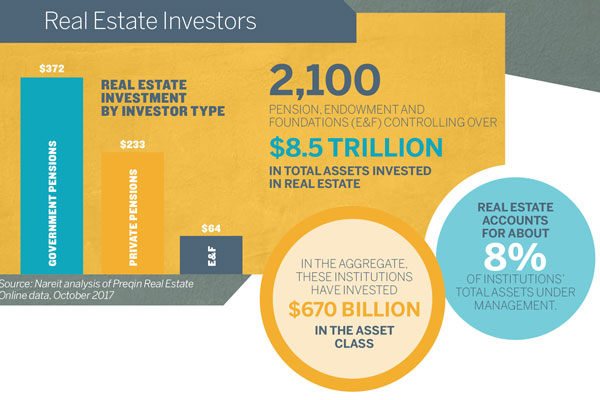 Scott Crowe, chief investment strategist and portfolio manager with CenterSquare Investment Management, estimates that defined benefit plans are split roughly down the middle in terms of those that view REITs as essentially proxies for direct ownership of real estate assets. All in all, pension plans’ underallocations to REITs stand out even more “considering that REITs own some of the best real estate in the world,” according to Crowe.

“I think that half the [defined benefit plan] market remains too closed minded as it relates to REITs,” he says.

What Is Keeping Defined Benefit Plans From Embracing REITs?

Historically speaking, the knock on REITs in the defined benefit community is their volatility, or as Andy Rubin, institutional portfolio manager for Fidelity, puts it, REITs are perceived as being “too stock-like.”

“The perennial argument always exists between measured and realized volatility,” Crowe says. “There are some investors that basically don’t treat [REITs] as real estate because [they have] daily pricing, and I think that segment of the market will always exist.” 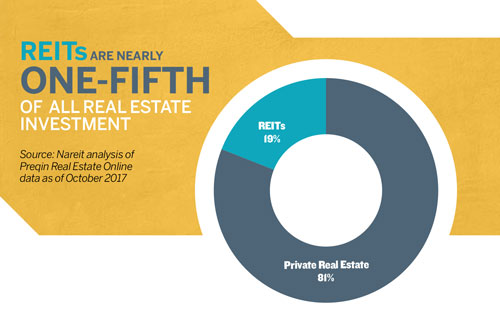 The fact that REITs are public equities means they are subject to some of the “noise” that affects the broader investment market, according to Rubin. However, he points that the arguments change over the longer holding periods customary to defined benefit plans.

“Academic study after study have certainly confirmed that over appropriate length periods… that a lot of that shortterm noise sort of comes out in the wash,” Rubin says.

Despite the historic under-allocation to REITs among pension plans, investment managers maintain that opinions in the space are changing.

“We believe that the view on REITs has clearly improved over time as a recognition of their benefits has come to light,” Dybas says. 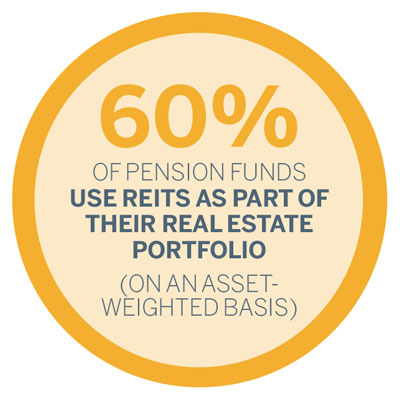 In addition to a recognition of the investment benefits of REITs, the growth of the listed REIT market in size, depth and breadth has played a key role in calling attention to the industry, according to Rubin. Notably, in 2016, S&P Dow Jones Indices and MSCI elevated stock-exchange listed real estate companies from under the Financials Sector to a new 11th headline Real Estate Sector under the Global Industry Classification Standard (GICS). Rubin also points out that REITs offer exposure to segments of the commercial real estate market that aren’t available through traditional private real estate investment, such as data centers and cell towers.

Overall, Dybas says the firming of positive sentiment by pension plans and appreciation for the investment attributes of REITs should continue to bring larger allocations to the REIT space. “We think the future actually is a prosperous one for the underlying plan beneficiaries and participants to the extent there is an increased addition to the REIT allocation.

The new CEM research is actually an update of a study first published in 2016 that analyzed data from 1998 to 2014 on the impact of asset allocations on the investment performance of more than 200 large pension funds holding a combined $3.4 trillion in assets under management. The updated study covered 200 public and private pension funds over the 18-year period from 1998 to 2015. In total, the funds included in the new study  control approximately $3.5 trillion in assets.

CEM broke down the funds’ assets into 12 different categories to calculate their average annual net returns. The objective: analyzing the actual investment performance of the funds, not benchmark returns.

Some of the key CEM findings were:

What Do REITs Bring to Defined Benefit Portfolios?

REITs must distribute at least 90 percent of their taxable income to shareholders as dividends, which have given investors a reliable source of income over time.

These dividends can help pension plans fund their retirement benefit payments to beneficiaries.

Whereas direct real estate owners can find it difficult to divest their interests in their holdings, REITs provide a liquid form of real estate investment. Like all owners of REIT stocks, defined benefit plans can buy and sell their shares on the market with ease.

“Providing liquidity is a critical role,” Dybas says. “Many of the pension funds that have embraced REITs have have been attracted to the liquidity that REITs afford investors in an asset class like commercial real estate that can be rather illiquid,” Rubin says.

By investing in REITs, pension plans can round out their portfolios with an asset class that has a history of low correlation to the movements of the broader investment market. REITs respond to a different set of economic drivers and signals than other assets in the investment portfolio.. In turn, this has a smoothing effect on a diversified portfolio’s overall volatility.

REITs’ history of long-term capital appreciation and delivering dividends have offered competitive returns relative to the rest of the investment universe. “The performance that REITs have generated over very long periods of time is really a superior commercial real estate return net of fees versus private real estate vehicles,” Rubin says.

REITs provide investors the transparency of investments listed and traded on public markets. For pension fund managers with fiduciary responsibilities, this offers peace of mind.

Additionally, Dybas notes that as a growing number of defined benefit plans zero in on the environmental, social and governance (ESG) aspects of their investments, which should also make REITs appealing. “REITs allow pension plans to leverage their ongoing increased focus on sustainability as so many REITs are now increasingly focused on ESG, issuing robust sustainability reports as examples of their increased focus,” he says.