Plenty of people can’t wait to tell you how much they don’t like hospitals. On the other hand, Edward Aldag, Jr., chairman, president and CEO of Medical Properties Trust (NYSE: MPW), loves them.

Convinced that there was room for a niche player to provide capital to acute care facilities through long-term triple-net leases, Aldag began assembling a management team in 2002 that understood health care financing and operations.

“When we put together the idea of starting a health care REIT, we knew from the beginning that we would focus on acute care facilities. Everyone involved from the very beginning owned or operated hospitals,” Aldag says.

Formed in 2003, Medical Properties has never wavered from its hospital-centric strategy. The company’s precise focus has enabled it to become the largest owner of hospitals in the United States in terms of the value of its portfolio—more than $10 billion—and a growing presence in health care real estate internationally.

Hospitals were a bright spot in 2017 among health care real estate subsectors. Alex Pettee, president and portfolio manager of Hoya Capital Real Estate, attributed their strength to being relatively supply constrained and less exposed to health care policy changes than other segments of the sector.

For its part, Medical Properties saw its stock price rise 19.3 percent in 2017, while the FTSE Nareit Health Care REIT Index was up 0.9 percent.

“Medical Properties was one of the top-performing REITs in the health care space in 2017, defying the broader headwinds facing the health care sector,” Pettee says. “Investors have applauded [Medical Properties’] capital recycling effort as the firm has been proactive in selling properties with struggling operators and redeploying the capital into facilities with more stable cash flows. As the lone hospital-focused REIT, they have established themselves as a dominant player in a market where scale is increasingly important.”

Aldag attributes Medical Properties’ success to the fact they’ve owned more than 300 facilities in the past 15 years and only needed to place a lien on one tenant. “We do our underwriting really thoroughly,” Aldag points out. “Plus, it’s better to be a bigger company with more cash.”

Jordan Sadler, an equity research analyst at Key Banc Capital Markets, agrees that the focus on hospitals continues to be an advantage to the REIT. “While diversification of assets can be good sometimes, sometimes it can be bad when the leadership becomes ‘jack of all trades and master of none’,” he adds.

During the past two decades, REIT investors have placed a premium on specialization, Pettee explains.

“Medical Properties is a perfect example of how laser-focused executives can create value even in an otherwise anemic underlying operating environment,” he says. “Being the lone dominant player in the hospital space, the positive effects of this specialization are magnified as Medical Properties has been able to skillfully redeploy capital to create value for shareholders.”

Specialization at Medical Properties includes a management team with hospital operations experience as well as other health care, finance and real estate backgrounds.

“Medical Properties’ portfolio is carefully chosen so that the facilities are extremely important to their communities,” says Drew Babin, a senior research analyst with Robert W. Baird & Co. “They structure their leases so that even if they have to change the operator, the facility will need to stay open.” 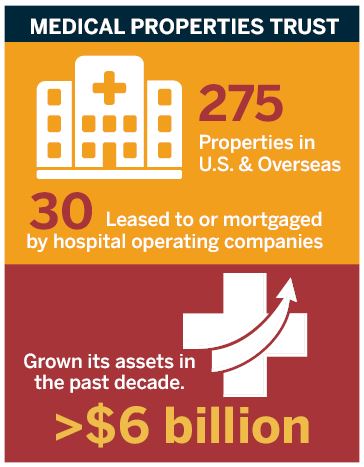 Medical Properties’ scale and expertise led the company to begin investing in Europe about five years ago. The company owns medical facilities in the United Kingdom, Germany, Italy and Spain.

“We still believe the U.S. has the best health care in the world, but there are periodic times of disruption,” says Aldag. “It’s always been part of our plan to expand into Western Europe.” Aldag says.

Medical Properties waited to expand abroad until the management team felt the company was big enough to handle it. “We chose Western Europe because the culture is similar to the U.S. and we could trust in the rule of law,” says Aldag.

Approximately 20 percent of Medical Properties’ portfolio is invested in Europe now, with the other 80 percent in the U.S. The future goal is for this ratio to be 30 percent European investments and 70 percent U.S.-based.

One issue that caused some volatility in Medical Properties’ stock early in 2017 was the bankruptcy of Adeptus Health, an operator of freestanding emergency room facilities.

“Medical Properties was the primary financier and creditor for Adeptus, which was doing great for awhile and then basically went to zero,” Sadler says. “The way Medical Properties handled this is just another testament to its strong underwriting skill.”

Medical Properties dealt with Adeptus’ bankruptcy quickly by re-leasing the space to a high-quality system and was able to maintain its existing rents.

“We were well-protected with our master lease and we knew the locations well,” Aldag explains. “Our underwriting was good and we were comfortable with where we were all along. Our investors were worried, but they came back. We never lost any money and now we have stronger tenants than before.”

Deerfield Management acquired Adeptus, which remained current on all lease payments during the bankruptcy. “It’s always a good feeling to tell people how things will go when you face a challenge and then have them actually go that way,” Aldag says.

To Babin, the event was consistent with the history of Medical Properties’ management team.

“The Adeptus situation shows how well Medical Properties plans and the adeptness of the organization,” Babin points out. “Medical Properties has a very impressive batting average and excellent stability of cash flow even though their operators are private and therefore have less transparency.”

The attempted repeal of the Affordable Care Act does create some lingering uncertainty in the health care real estate market, but that doesn’t worry Aldag much. Reimbursement issues have always been an issue and will always be in a state of change, he says.

“One thing I know is that hospitals will always be here because they have to be for certain things,” Aldag states. “What I think about more is underwriting. If a hospital is integral to a community and people won’t be able to get services without it, then we want to invest in it regardless of what’s happening with reimbursements.”

Aldag says the management team looks for situations to invest in and work with strong operators, which he says is a good model for the efficient use of capital. “I expect Medical Properties to be aggressive and to acquire more properties this year,” Babin says. “Unlike the rest of the health care sector, there’s not that much competition for hospitals.”

Medical Properties typically spends $500 million to $1 billion annually on acquisitions, but Aldag says the company spent about $2 billion in 2017. He anticipates a similar spending level in 2018.

“Total returns for Medical Properties this year should be very positive,” according to Babin. “They trade inexpensively, well below where they should be. They just need to fight off that perception some people have that the hospital space is tough.”