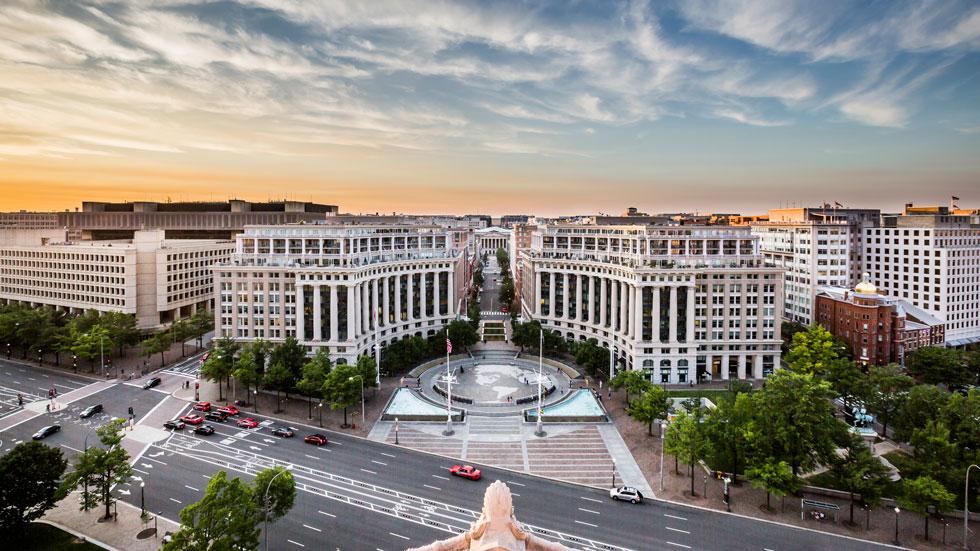 Nelson Mills, the company’s president and CEO, says the “dramatic” transition is essentially complete. Now, it’s showtime: Time to show investors that their patience will be rewarded after the company sold off more than 50 properties and reinvested most of the $3.6 billion in proceeds into only 10 high-value, big-city assets. Time to show that the company made the right move by cashing out of markets like Chicago, Houston and Cleveland and doubling down on gateway central business districts—those urban, walkable areas filled with boutique stores and gourmet coffee shops adored by millennials.

Mills is resolute that focusing primarily on New York, San Francisco and Washington will ultimately lead to success for Columbia.

“We believe, over time, that these three markets present the most compelling case for rewarding our investors, and that’s why we’ve chosen to build our team and portfolio around them,” he says. “Diversification has its benefits, but there’s also something to say for being focused. That’s the trade-off.”

The REIT, which originated in Atlanta, has traded at a double-digit discount to its net asset value (NAV) for much of its public life and has struggled to attract some of the institutional investors that have long supported REIT stocks. Mills says he understands why, and he’s confident Columbia’s latest moves put the company on solid footing.

“Investors and analysts like a clean story,” he says. The last few years have been “anything but a clean story. That’s behind us.

PNLRs typically have finite lives, and the company had to give its shareholders a way to access the value of their shares by listing them or liquidating. The portfolio’s second act was as a publicly traded REIT under its new Columbia moniker, which listed its shares on the New York Stock Exchange on Oct. 10, 2013. Its cousin, Wells REIT I, was reborn as Piedmont Office Realty Trust (NYSE: PDM), an owner of class-A office space in eight markets.

One issue for Columbia from the get-go was that it had properties spread across more than 30 markets, with only one asset in most of those markets, making it hard to build a presence in those areas. Furthermore, many buildings had only one large tenant, leaving Columbia at risk of a large empty space should that tenant vacate.

“While it was a great collection of assets, it was a very far-flung portfolio,” Mills says. “It became very clear that this portfolio and that strategy wasn’t the best way to go.”

So, the selling began. In late 2013, for example, Columbia sold 18 properties for $521.5 million. The deal included quality, albeit relatively nondescript, properties in areas oustide Indianapolis, Nashville and Philadelphia. A string of additional deals took the company out of more markets. Now, even though the company will continue to maintain its corporate operations team in Atlanta for the foreseeable future, a remaining pair of properties there will likely be sold, as will one property left in Pittsburgh.

Columbia’s strategy has caught the eye of major investment houses. In the summer of 2017, Columbia closed on a joint venture with Allianz Real Estate. At the time, Allianz praised Columbia as a “nimble, long-term investor” with a “vision and ability to create value.” The partnership currently boasts a gross net asset value of $1.7 billion with potential to acquire additional properties. 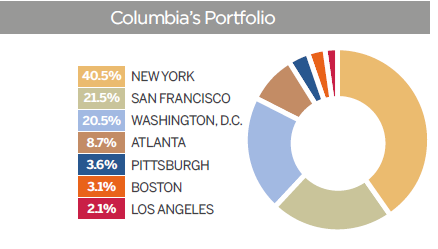 Meanwhile, in 2015, Columbia sold a 49 percent interest in Market Square, a trophy office property located in Washington between the U.S. Capitol and the White House, to Blackstone Property Partners U.S. At the time, Blackstone said it was “excited to partner with such a well-respected group.”

That respect has grown largely as a result of Columbia’s focus today on its three key markets, which account for 83 percent of the company’s gross asset value. In Washington, in addition to Market Square, Columbia’s assets include 80 M Street, a newly renovated Capitol Riverfront building, and 1800 M Street, acquired late last year through its joint venture with Allianz Real Estate. Columbia also plans to continue building on its presence in San Francisco, where it has four significant properties with minimal vacancy.

The latest move in Columbia’s strategic shift involves a big investment in New York—largely Manhattan—a market long prized for skyscrapers filled with some of the world’s most coveted space.

It is the company’s largest market with 2.6 million square feet, representing 40.5 percent of the portfolio and about a third of the net operating income, according to financial filings.

Just how serious is Mills about New York? Serious enough that last year he and his wife relocated from Atlanta, where they’d lived for more than two decades, to the up-and-coming Midtown South area.

When discussing its successes, the company points to 222 E. 41st Street, a newer 25-story building near the key Manhattan transportation hub of Grand Central Terminal. While the primary law-firm tenant opted to leave the space when its lease expired, New York University quickly signed a deal to take the entire building for three decades as part of the expansion of its Langone Medical Center. Columbia also purchased the former New York Times headquarters near Times Square, adding a landmark to its portfolio.

Analysts, meanwhile, cite the 20-story 315 Park Avenue South as another success story. Nelson recalls that 75 percent of tenants leases were expiring within three years of the acquisition, including anchor tenant Credit Suisse. This presented a revenue roll-up opportunity for Columbia, which filled part of the financial space with upscale gym Equinox. The office REIT also created a buzz when Gemini Trust Company, the digital-currency exchange started by the Winklevoss twins, leased two floors there in 2017.

Columbia has “made a ton of leasing progress. We think that’s a good thing,” says Sheila McGrath, an Evercore ISI REIT analyst.

In addition to reorganizing its property portfolio, Columbia is working to offer what more modern companies want in offices, carving up large floors into smaller spaces that offer flexibility. Some properties offer a concierge, a perk more common with higher-end hotels, to help tenants do everything from arrange social gatherings to secure dinner reservations.

“It’s the new age of office leasing,” according to Mills, 57, whose enthusiasm for the industry comes across as he talks.

Of course, location remains key, as Mills points out. Desired addresses on streets like Fifth Avenue in New York and Market Street in San Francisco meant trading higher cap rates for lower ones, which weighed on the company’s cash flows and stock price during a bull market.

Analysts generally expect Columbia to turn the proverbial corner in 2018. The concessions used to secure new tenants are beginning to end, which are expected to provide high dividend yield and earnings growth.

JMP Securities analyst Mitch Germain has maintained a “market outperform” rating on Columbia’s stock. The valuation is compelling, he claims, with shares trading at a 20 percent NAV discount and an implied 6 percent cap rate, well above private market yields in respective markets. What’s more, he says, the portfolio is 96 percent leased, net operating income is expected to jump more than 40 percent and the average lease term is more than seven years. That should mean a stable cash flow.

“They’ve put a lot of challenges behind them. We think investors are going to see this ramping up cash flow and give them more credit that the transformation is done,” says McGrath, who upgraded the company’s stock to “outperform” in late 2017. “This is a pivotal time for them.”

John Kim, a REIT analyst with BMO Capital Markets, is also bullish on Columbia. The company “has done an admirable job identifying and executing its ambitious turnaround strategy,” he says.

“The company had a relatively tight window to maximize returns on non-core dispositions, and suffered through a significant amount of earnings dilution during the process,” Kim reports. Columbia now “has a high-quality, focused portfolio with strong organic growth that we think the market will appreciate.”