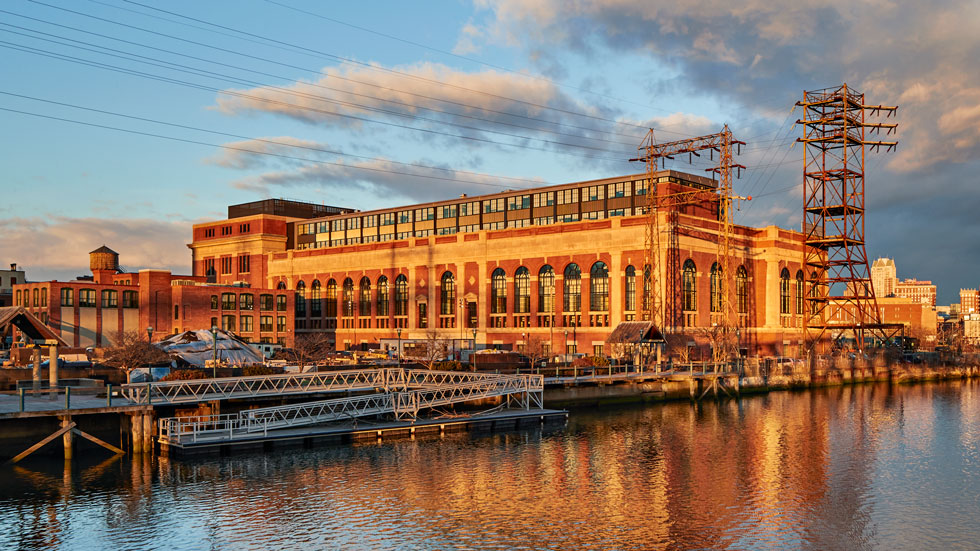 “For years, this building sat vacant, and now it is humming with high-level academic and professional activity,” Rhode Island Secretary of Commerce Stefan Pryor explains. About 136,000 square feet of the building’s 268,000 serves as administrative offices for Brown University, housing more than 400 employees. The remaining 132,000 square feet house the state-of-the-art Rhode Island Nursing Education Center (NEC), an initiative between Rhode Island College and the University of Rhode Island’s nursing programs. Once a former power station, facilities now include classrooms and cutting-edge laboratories catering to more than 600 students, all within close proximity to Brown’s Warren Alpert Medical School. The site also includes a parking garage and plans for riverfront student housing.

South Street Landing merges the old with new, the public with private. Its diverse collaborators include multiple learning institutions, the city and state, and strategic partners Ventas, Inc., (NYSE: VTR) and developer Wexford Science Technology, LLC. The massive $220 million redevelopment project represents the first phase in a rebirth of Providence’s historic Jewelry District—the gateway to a new innovation hub—and a wave of economic opportunity for the state.

The high-tech Nursing Education Center’s light-filled, modern facilities with sweeping views of the Providence River now stand where huge coal-powered turbines first created electricity to power much of the city and surrounding area.

Construction on the original South Street Station, also known as the Narragansett Electric Lighting Company (NELCo) Power Station or Dynamo House, first began in 1912 and led into the following decade. As increased demand for electricity expanded throughout the region, so too did South Street’s operations. NELCo expanded South Street Power Station as its electricity production grew more than 500 percent in its first decade of operation.  NELCo provided residential and industrial electricity throughout the region and secured the first contract there to provide “highway illumination,” replacing Providence’s gas lamps with electric opalescent globes and tungsten lamps. As new technologies emerged, South Street Power Station was eventually phased out over the coming decades and officially decommissioned in 1995.

South Street Landing’s rich history plays more than just a minor role in its design and preservation now; in fact, it helped finance its redevelopment. The project garnered $27 million in state historic tax credits and $22 million in federal historic tax credits. It remains listed on the National Register of Historic Places for Providence. Architects preserved parts of its first floor and many of its historic architecture features in keeping with guidelines placed by Rhode Island’s Historic Preservation Commission.

By the early 2000s, boarded windows, pigeons, and graffiti were some of unwelcome additions to South Street Landing.

After previous attempts by the city to redevelop the site faltered in the wake of the recession, developer Dick Galvin of the Boston-based firm CV Properties LLC saw an opportunity to bring South Street into larger plans to increase Brown University’s student housing and utilized unlocked riverfront lands created by the relocation of I-195 highway. Collaborative talks between the nursing programs at the University of Rhode Island and Rhode Island College had also started to develop to meet the increased need and caliber of its training programs.

“We saw what South Street Landing and Dynamo House, which is a historic building at South Street Landing, could become,” says Tom Osha, Wexford’s senior vice president of innovation and economic development. “Its position, the opportunity to revitalize the Jewelry District, the history—all of that really attracted us, and certainly the opportunity to work with great research universities”.

In September 2016, health care REIT Ventas acquired the bulk of the life science and medical real estate assets of Wexford from affiliates of Blackstone Real Estate Partners VIII L.P. for $1.5 billion. The move made Ventas and Wexford strategic partners with an exclusive pipeline agreement on future developments.

“What attracted us to the life science business was the ability to invest in great real estate and in partnership with universities, academic medical centers, research companies and to really find a new way to access the exciting growth within health care, particularly life science research,” explains Bob Probst, Ventas executive vice president and CFO.

To Ventas and Wexford alike, the move was a complementary pairing.

“A lot of universities have been reluctant to engage developers in the past because a university doesn’t want its developer to flip a project,” explains Osha. “But with Wexford, which specializes in working with universities, and Ventas, who as a REIT has a very long view approach and doesn’t flip projects, that becomes a very powerful combination. This allows institutions to move quicker, to be able to bring private enterprise closer to them, to upgrade facilities without impacting their balance sheet, so all of that forms a very symbiotic partnership from a development perspective,” he says.

In March 2017, Ventas announced its purchase of the Providence campus from Blackstone for $130 million.

“We are excited that a firm with Ventas’ vision and reputation is investing in an important project that advances the education, infrastructure and workforce development goals of Brown, the city of Providence and the state of Rhode Island,” said Brown University President Christina Paxson after Ventas’s acquisition.

“We are creating a hub for life science research, for innovation, for entrepreneurship, economic innovation,” says Probst. “Our real estate really is the backbone of a campus that brings those parties together to stimulate economic expansion and to bring the talent together to cluster here, which will be the driver of innovation and economic growth for the communities.”

Ventas and its partner Wexford broke ground on another collaboration with Brown University in the vicinity of South Street Landing in the fall. The first phase welcomes tenants such as Johnson & Johnson and Cambridge Innovation Center, a company that provides coworking space for startups. The Providence Innovation Campus is part of the revitalized I-195 Innovation & Design District created by the Iway, a $610 million project by the Rhode Island Department of Transportation that relocated the Interstate 195 and Interstate 95 intersection and reunited the Jewelry District with the rest of downtown. The Iway opened in 2009, and I-195 Redevelopment District Commission formed in 2011 to oversee the management and sale of the more than 20 parcels of land unlocked by the Iway project.

Both Ventas and Wexford credit the power of innovation to spur economic growth and improve health care. “We believe deeply that innovation can create both social and economic inclusion and improve the workforce,” says Osha.

“As we continue to grow, we’re going to have programs for minority entrepreneurs that are going to be in our newest building, the Innovation Complex,” says Osha.

“As a health care REIT, one of the key things we’re trying to do is ultimately provide very efficient, high-quality cost of care for patients and residents of all kinds. This is another angle into the health care world, and one where we can add some real value,” adds Probst.

For local officials, South Street Landing and the incoming Innovation District not only demonstrate progress, but they represent the return of the city to its cultural and economic roots.

“In the past, the area was a fount of innovation for the jewelry making industry, and it is incredibly exciting to see world-class innovation once again in Rhode Island,” Pryor  says.

For developers, Providence is a city with a great intellectual anchor, close to the Boston and New York markets, where the cost of doing business is lower. Innovation market and job opportunities also attract talent to work, live and play in Providence, which in turn will spur economic and retail activity, according to Osha.

South Street Landing’s proponents credit these developments with providing tangible benefits to the community at a lower cost to the state than would have otherwise been possible. According to Wexford, for every dollar the state invested in the project, private investors and Brown University invested more than two, making the state’s $68 million dollar investment 31 percent of the project’s total $220 million cost.

“It really is a win-win for all of those stakeholders,” says Probst.

So far, the benefits from the state’s collaboration with private partners include: the reopening of the west bank of the Providence River through an extended River Walk; a new pedestrian bridge across the river; more than $5 million in income and sales tax revenue for the state and city during construction and $1.1 million annually thereafter for Rhode Island; and the addition of 500 construction jobs and 375 indirect jobs during construction, producing $92 million in income.

“One of the things we focus on is the impact of what we do. It’s easy to get wrapped up in the real estate and the design, but in a lot of cases, what these buildings enable is most impactful for communities,” Osha says, “We also saw South Street Landing as one of the keys of beginning to stitch back the historic Jewelry District in the fabric of downtown Providence itself.”

Pryor credits collaboration with South Street’s success. “Without this public-private partnership (across governmental administrations) this project would not have happened,” he explains. “The project came together beautifully, with tenants of remarkable quality—the University of Rhode Island, Rhode Island College and Brown University—working in concert with the developers and the public sector. These institutions exercised terrific leadership in advancing this project.”

For Ventas, the future of its newly minted life science sector also looks promising. “We see a rich pipeline of opportunity to participate in university public-private partnerships. Having already grown more than a third in a little over a year, that just really speaks to the amount of opportunity,” Probst says.