Why Diversity Matters in the Knowledge Economy

Are politicians, CEOs, doctors, religious leaders and scientists as informed as they could be when creating public policy, business plans, health care plans, theology and theorem? If you think there is room for improvement, then you aren’t alone.

In his latest book, The Diversity Bonus: How Great Teams Pay Off in the Knowledge Economy, University of Michigan professor Scott E. Page expounds the virtues of diversity and inclusion in a culture. He spoke with REIT magazine about his work on decision-making among groups and in the corporate world.

Why are diversity and inclusion so important in the knowledge economy?

Our workforce is much more identity diverse than ever before. Our knowledge base has grown, so we are also more cognitively diverse.

Can you provide examples of your diversity bonus concept affecting better outcomes?

The cleanest examples come from predictions where you can compare individuals against diverse groups and from academic research where you can count citations and measure impact.

Can you explain why you feel a dynamic group of diverse individuals will outperform a group of similarly minded people almost every time?

You have to define the task. Is it problem solving, prediction or creative idea generation?

Let’s take creative idea generation. In class, I have students compete in the Alternative Uses Test. The test suggests an object; say a cinderblock. The students must then think of as many uses of a cinderblock as possible in five minutes. The best students may think of 20 uses—everything from a foundation for a trailer home to a boat anchor.

If you have a group of 10 students from the same background, they may each think of 15, but the group collectively might only think of 25 because of overlap. If you take 10 diverse students, they may collectively think of 40 because they overlap less. Someone from Michigan does not think of using cinder blocks to build an armadillo pen, an idea that someone from Texas might think up right away.

Can you speak to how financial services companies can gain a diversity bonus?

Is there room for improvement in most companies’ social governance plans for diversity?

The space for improvement is enormous. Most managers do not know what their direct reports know. Most managers, when they put together teams, do not think of cognitive diversity as something to be leveraged. So often, I meet well-intentioned managers who see false trade-offs between ability and diversity. That’s all but guaranteeing mediocre [results]. Excellence on complex tasks—predicting, problem solving, creating and designing—requires talent and diversity.

I’ve met with building committees tasked with construction of a new office facility or retail space that contain no physically challenged members, no one who has limited sight, and no one young or elderly. Their array of experiences will be limited, and so will their buildings.

You told a group at NASA that “social science is harder than rocket science” with regards to creating an effective diversity program. Can you elaborate on what you meant by this?

Electrons always do the same thing. People adapt. Co-founder of the Santa Fe institute and Nobel Prize-winning physicist Murry Gell-Mann once said, “Imagine how difficult physics would be if electrons could think.” That’s why social science and investing are so difficult. I might add to Murray’s quote to say, “Imagine how hard physics would be if electrons could think and sometimes chose not to.”

What are some pitfalls of relying on data versus human collective problem solving?

This is a fun dinner conversation topic. I once saw Doyne Farmer, the renowned physicist and entrepreneur, silence a large crowd by saying, “Would you really follow the advice of a fuzzy algorithm that loads in all sorts of data, encodes it in ways you cannot discern, mixes causal and correlative relationships, and spits out an answer that it cannot fully explain?” Of course not. And yet, you do any time you take another person’s advice. 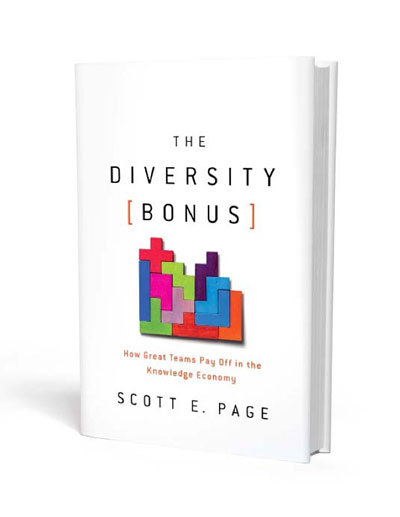 All fun aside, I think we have to see these deep learning algorithms as producing information and, at times, knowledge, but they lack wisdom.

What are some of the greatest challenges to diversity and inclusion programs in most businesses today?

The challenge to achieving the bonus from cognitive diversity is that many of the ways we operate—the ways we hire and build teams—were developed of, by and for a more homogeneous workforce.

Cutting deals in the skybox at the [Chicago] Blackhawks game may be how you “always did it,” but a Native American woman manager may not like hockey; may have children at home that she’d prefer to be with in the evenings; and may find the team name a wee bit offensive.