Broadstone Net Lease, Inc. (NYSE: BNL) has come a long way over the course of its history. Yet in some regards, the newly public net lease REIT hasn’t changed at all.

Rather than hitching its star to any single tenant type or geographic market, Broadstone has long cast a wide net with regard to portfolio composition—a strategy that’s helped insulate its portfolio during periods of economic stress and allowed the company to adjust to changing market conditions.

“Diversification has been incredibly important to us. We’ve been intentionally diversified since inception,” says Chris Czarnecki, president and CEO of Rochester, New York-based Broadstone.

When Czarnecki joined the then-private company in 2009, it was just over a year old and had fewer than 10 employees. Yet Broadstone had already begun to set itself apart from many other investors in net lease properties by tiptoeing into the health care and industrial sectors.

As of December 2020, its portfolio consisted of 641 single-tenant properties in 41 states (and one Canadian province) across the industrial, health care, restaurant, office, and retail sectors. Under the triple-net lease structure, tenants pay all property-level expenses, including taxes, insurance, utilities, and maintenance.

Properties leased to health care and industrial firms account for about 65% of Broadstone’s portfolio, as measured by their contribution to its annualized base rent. Its health care properties house clinical and surgical centers, as well as specialty and veterinary facilities. Because of their essential nature, such tenants have tended to fare better during the pandemic than movie theaters, fitness centers, and certain other types of tenants that are common to the net lease space.

Geographic diversification has also served Broadstone well. While restaurants have been hard hit by the pandemic, some of Broadstone’s largest restaurant tenants have a national footprint, which has helped to mitigate the impact of restrictions on dine-in activity in parts of the country.

Many of the same tenants have master leases with Broadstone that span multiple states and metro areas. Red Lobster is Broadstone’s largest tenant, as measured by its contribution to annualized base rent. Jack’s Family Restaurants, Outback Steakhouse, and Krispy Kreme are also among its top-20 tenants.

The company’s footprint in Texas is perhaps the best illustration of its deep level of diversification. The state is Broadstone’s largest market and its holdings there generate approximately 10% of the company’s annualized base rent. Within Texas, the company has properties in 20 different metro areas and 29 tenants spanning 16 industries.

“It just gets more and more granular as you go,” says Czarnecki, adding that Broadstone was among the best-performing net lease REITs in 2020, as measured by rent collection, largely because its holdings aren’t concentrated in any one market or industry by tenant type. 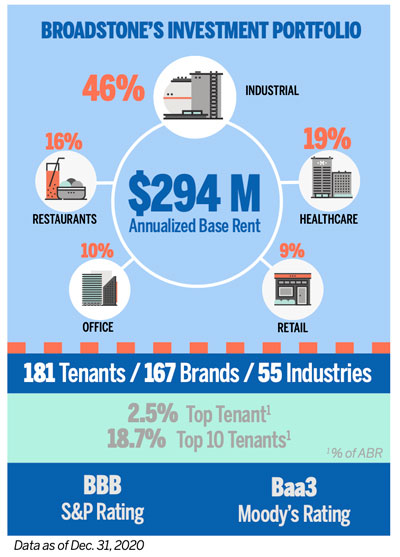 During the second quarter of last year—when many states began to lift stringent lock-down measures—Broadstone collected about 95.5% of its rents, according to the company. Its rent collection rate rose to 98% in the third quarter and to 99% in the fourth quarter.

“You had this massive credit event, in the form of COVID, that stress-tested portfolios, and Broadstone’s portfolio performed particularly well,” says J.P. Morgan analyst Anthony Paolone.

In April and May 2020, rent collections for net lease REITs averaged in the 70% range, according to J.P. Morgan Research. Broadstone, Paolone says, not only performed well relative to its peer group in terms of rent collection but did so despite the fact that it had a comparatively low level of investment-grade rated tenants.

At the time of Broadstone’s initial public offering (IPO) in mid-September 2020, the percentage of investment-grade rated tenants in its portfolio was about half the average for its peer group, 16% versus 36%, according to J.P. Morgan.

“You’d think that the lower the credit quality of your tenancy, the greater the likelihood that you’d have rent collection challenges due to COVID. But that wasn’t the case for Broadstone,” Paolone says. “That reflects well on management’s ability to underwrite tenants and assets,” he adds.

Not only has Broadstone come through the pandemic relatively unscathed, but its transition from private to public company hasn’t been a huge leap, according to Czarnecki. That’s because Broadstone has long operated like a public company on many fronts—from transparency to managing its balance sheet. Its modus operandi hasn’t gone unnoticed.

“They’ve had a fiduciary mindset in terms of being transparent and running things with an appropriate level of risk controls and disclosure: The things that we think are pretty important in the public markets,” Paolone says.

Broadstone was founded in 2007 by Amy Tait, its current chairman and a veteran of Home Properties Inc., a former multifamily REIT that was purchased in 2015 by an affiliate of private equity firm Lone Star Funds. Tait served as the company’s CEO from inception through 2017 before transitioning into her current role. She intends to retire from her position in May.

Broadstone began as a so-called friends-and-family offering and over time gained a following among high-net-worth investors and independent wealth advisors to trust companies, private banks, and individuals. As a private company, it raised more than $2 billion in capital from outside investors over more than a decade.

In 2016, Broadstone received a Baa3 investment-grade credit rating from Moody’s, a notable accomplishment for a relatively small, privately held firm, Czarnecki says. The following year, the company became a public filer with the Securities and Exchange Commission, owing to the fact that its shareholder count had reached 2,000.

“Do things the right way for the right reasons is a phrase we use a lot,” Czarnecki says. He worked in banking before joining Broadstone and took over the helm in 2017. Before becoming CEO, he served as CFO.

Why has Broadstone long embraced a public company mentality? Czarnecki points to the influence of its founder.

“We sourced our capital privately for 13-plus years before going public and continued to grow the portfolio, but we always had a public company mentality by virtue of Amy’s guidance and experience in the [public-company] space,” Czarnecki says.

Through its IPO, Broadstone raised more than $588 million, which it designated for future acquisitions and to pay down unsecured debt and its revolving credit facility. In keeping with its pace of acquisitions over the past five years, this could translate to roughly $500 million in acquisitions in 2021 for the firm.

“Given our size, that is meaningful external growth,” he notes. As a public company “we’re large enough where we matter and people want to hold our stock, but not so large that we need to do $3 billion to $5 billion worth of acquisitions a year to deliver superior results,” Czarnecki adds.

The company remains bullish on industrial and health care properties. Within the health care space, Czarnecki says Broadstone will continue to focus on facilities leased to hospital-affiliated providers, but located off main campuses, typically in suburban settings. In addition, Broadstone will continue to invest in facilities leased to dominant regional physicians’ groups specializing in such areas as eye health and orthopedics.

To a lesser degree, Broadstone is looking to acquire buildings occupied by fast-food and quick-service restaurant chains and internet-resistant retailers, such as Tractor Supply Co. and dollar stores. Tractor Supply Co. is among the company’s top-20 tenants, as measured by contribution to annualized base rent.

Broadstone is taking something of a wait-and-see approach to certain other sectors that remain in the cross hairs of the pandemic, such as casual dining and office. “We have some exposure [to casual dining], but with the pandemic, many operators are still finding their footing in terms of business models,” Czarnecki explains. “Office is a small part of our portfolio, at just 17 properties. We feel good about the term and credit of our office exposure, but we want to make sure we understand the broader landscape as the work-from-home trend plays out,” he says.

Broadstone certainly isn’t the only investor that’s bullish on industrial and health care net lease assets. BMO Capital analyst John Kim says there’s plenty of competition for such properties, but he’s confident that Broadstone will be able to execute its near-term growth plan. BMO Capital estimates that Broadstone will grow its annual earnings by about 8% in 2021 and 2022, mostly through acquisitions.

“Given its track record, current size, the interest rate environment and coming out [of its IPO] with a strong balance sheet, Broadstone has a lot of opportunity to grow earnings, mostly through acquisitions,” Kim says.

Broadstone, he adds, also has a relatively high level of internal growth because of its asset mix. As of December 2020, the weighted average annual rent escalation for its portfolio was 2.1%, which, according to Kim, is relatively high for a net lease REIT.

With its IPO in the rear-view mirror, Broadstone has wasted no time when it comes to deploying capital. In the fourth quarter of 2020, it acquired more than $100 million of assets, including industrial, quick-service restaurant, health care, and select retail properties.

“For us, it’s about continuing to maintain our discipline and continuing to pick spots where it makes sense [to invest],” says Czarnecki, noting that deal-making activity in the fourth quarter illustrates that Broadstone can continue to compete for industrial and health care assets.

What does Czarnecki see as his biggest challenge as CEO? Ensuring that the firm’s more than 70 employees stay engaged and focused after many months of working remotely, he says.

Fortunately, Czarnecki says, many of them have worked together for years, which has helped mitigate some of the challenges tied to remote work. The company’s average employee tenure is about four years. For senior employees, average tenure is just over five years.

“The longevity of working together has helped us a lot,” Czarnecki says. “But we want to continue to support our people because that’s a huge part of our business, driving results through their efforts.”

Also high on Czarnecki’s list of priorities is cultivating stronger ties to investors who are relatively new to Broadstone. The company, he says, has forged strong ties with many of its pre-IPO investors, but has more work to do when it comes to reaching out to newcomers.

“Connectivity and building relationships with shareholders are critical and will be super important once we’re able to make the rounds [in person] again,” Czarnecki says.