Title: Associate Professor of Business and Public Policy, The Wharton School of the University of Pennsylvania

Experience: Wolfers is a tenured professor at The Wharton School of the University of Pennsylvania who has gained notoriety for his application of economic theory to everyday subjects, such as marriage and racial discrimination in professional sports. In addition to his more academic writings, Wolfers also blogs for Freakonomics.com. He is currently on leave from Wharton and serving as a visiting professor at Princeton University.

Long viewed as soft-spoken geeks attracted to dense mathematical equations and pocket protectors, economists have emerged from their offices in ivory towers to share their gifts for interpreting the efficient allocation of resources. Rather than preoccupying themselves with theoretical models of widget factories, they’re writing books about the economics of happiness and blogging about the effects of the death penalty.

Justin Wolfers, professor at the University of Pennsylvania, is one of the leading figures in the new school of economics. REIT magazine interviewed the laid-back Australian, who’s currently a visiting professor at Princeton University, about the new vanguard of the dismal science. 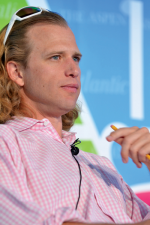 REIT: Are economists the new rock stars of the business world in the same way that we used to look at management gurus?

Wolfers: Well, I think it’s certainly the case that economists are playing a bigger role in the public square. On the demand side, we’re being offered a lot more space now in places like the editorial pages. You also see people like economics bloggers making an impact.

REIT: What is it about economics that has sparked the general public’s increasing interest in the discipline?

Wolfers: In my generation, I think what has really changed about economics is that we’re delving into a much broader scope of subjects, not just Keynes and fiscal and monetary policy. Gary Becker of the University of Chicago, one of my heroes, taught us that economics is a tool that can teach us about all aspects of our lives. We now speak to a broader range of issues that resonate more—families, crime, sports.

Methodologically, things have changed as well. We’re talking about the lives that people live, not just Greek letters and equations. We now admit that we’re interested in understanding how and when and where people make mistakes.

Economics also intersects more with different disciplines now. Of course there’s politics. But there are also areas such as sociology, where we study the economics of crime. Legal scholars are even using economics more often now.

Wolfers: This all started back when I was actually a graduate student trying to understand the European unemployment problem. The analytical framework economists use to think about the labor market can also be applied to thinking about how people couple.

According to the traditional view, a family more or less runs like a little firm. This idea was rooted in the emphasis on specialization in economics. In other words, we’re all better off if we specialize in doing a small number of things.

When it came to marriage, it meant opposites would attract. If you were a high-flying CEO, you didn’t want to be married to another CEO. You paired up with a domestic homemaker.

REIT: How romantic. I picture Don and Betty Draper. How would you say that has changed?

Wolfers: We’ve seen an enormous shift toward like-minded people matching together. A lot of what has happened is due to a range of purely economic forces that have changed the return on specialization of labor.

Betting on the husband in the workforce used to make more sense, because women didn’t have control over their fertility, which could take them out of the workplace unexpectedly for long stretches of time. There was also a higher degree of gender discrimination in the labor market. Today, those issues are of far less concern to families. Likewise, technological change has cut the returns to specializing in housework—anyone can run a modern washing machine—and this diminished the need to match with someone who had the domestic skills you lacked.

Now you want to marry someone who you have a lot in common with. Divorce is actually far less common in this generation than in previous ones, because the right people are more likely to partner together.

REIT: Let’s move on to the fall elections and another of your favorite subjects. You’re a big advocate of political prediction markets. What do you see as the primary benefits of betting on political events?

Wolfers: It’s simple, really. We typically look at elections through the context of polls, which are proven to be highly flawed.

REIT: If I’m an executive in the REIT industry, why should that make a difference to me?

Wolfers: Political outcomes are an enormous determinant of business opportunities. For example, President Obama’s administration has made the development of green technology one of its policy objectives, stimulating investment in the sector. The administration is also taking steps to encourage businesses to operate in a more environmentally friendly manner. And so the types of investments you want to make depend a lot on who is likely to get elected.

Prediction markets do a better job of providing this information. If you run a firm that stands to gain from a candidate’s tax plan getting through, prediction markets can put a valuable tool for forecasting at your fingertips.

REIT: We’ve already been inundated with media coverage about the candidates’ plans to jumpstart the economy and create more jobs. How much power does the president really have to affect the economy? Does it really even matter who wins, in that regard?

The easiest way to make that case is to think about what an “idiot” president could do. An idiot could appoint the wrong chairman of the Federal Reserve—someone who isn’t qualified for the position. This could have disastrous effects on monetary policy.

An idiot president could also do serious economic damage through foreign policy. Wars, as an example, can be extraordinarily expensive and a huge drag on the economy.

Fortunately, in the U.S., we haven’t had much of a history of screwing things up. We have two houses of Congress to keep the president in check, as well as all of the bureaucracies of government. Plus, Americans can vote elected officials out of office.