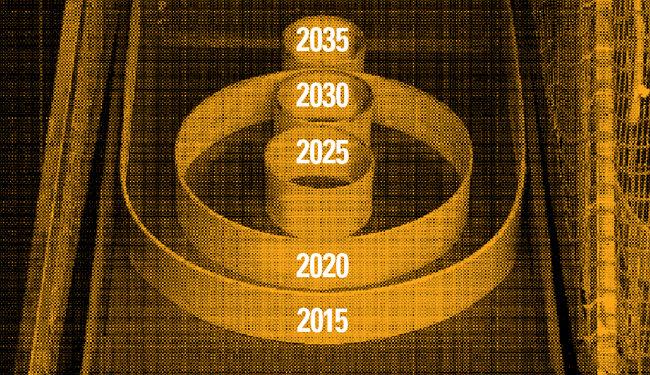 In the investing world, the target date fund (TDF) is a relative newcomer. Even so, TDFs have quickly grown into a default option for a number of retirement plan sponsors.
Such products allow defined contribution investment plan participants access to a measure of the professional management skills and investing expertise available through defined benefit plans, such as pension funds. TDFs build and manage investment portfolios that are based on the year in which investors expect to retire, with the goal of growing their nest eggs over a targeted investment horizon. As the years pass, TDFs automatically rebalance the mix of securities in the portfolio, generally shifting from a higher-growth, higher-risk exposure to equities to a higher-income, lower-risk exposure to bonds as the investor approaches and enters retirement.

The enactment of the Pension Protection Act of 2006 and a series of other factors have led numerous industry experts to conclude that within the next decade, a vast majority of the assets within the defined contribution market will be invested in these types of products.

A 2010 analysis from Casey, Quirk & Associates projected that assets under management by target date funds will grow to approximately $2.6 trillion in 2018, up from $311 billion in 2008. Target date and target risk plans will capture 80 percent of all new contributions to defined contribution accounts in the next decade, according to Casey Quirk.

Just as TDFs have exploded in popularity in retirement planning, the use of publicly traded real estate securities within the allocations of the funds themselves has also grown by leaps and bounds, too. Investment consultants and TDF architects have compiled more research on allocations for optimal performance, as well as experience in managing the funds. In the process, more have concluded that REITs should be an integral part of their investment portfolios.

To understand why TDFs have grown so significantly, you have to look at how the investment marketplace has evolved.

Long gone are the days when the majority of investors could rely on annuity distributions from pension plans as their primary source of retirement income. Because of the financial risk to employers posed by defined benefit plans, a growing number of firms have taken to offering defined contribution vehicles instead. These include 401(k), 403(b) and 457 plans.

In turn, TDFs were created by investment product providers as a one-stop shop for retirement planning. In lieu of going it alone, investors who don’t feel comfortable managing their own retirement portfolios can put their money in TDFs. Cleo Chang, managing director with Wilshire Associates, notes that research has shown investors tend to take a hands-off approach to managing their portfolios.

“The purpose of a target date fund is really to help individuals maintain a more disciplined approach with the attention to manage their retirement assets,” Chang says. “Studies show individual investors usually are very reluctant to make proactive decisions with regard to their assets. We’re trying to get individuals on a more appropriate track to manage risk and their assets over time.”

“REITs address a variety of risks that are central to target date fund management.”

“We focus on getting the most investors across the finish line safely,” says Rich Weiss, senior portfolio manager with American Century Investments, which oversees the LIVESTRONG asset allocation portfolios. “Our goal in LIVESTRONG target date funds is to provide a successful and secure retirement for the greatest amount of investors.”

According to a 2010 survey of defined contribution plan providers conducted by Towers Watson, 72 percent of 401(k) plan sponsors counted TDFs as their default option of choice, up from 62 percent a year earlier and a mere 38 percent in 2006.

Chang says Wilshire has seen the popularity of its TDFs grow significantly since they were made qualified default investment alternatives under the Pension Protection Act of 2006. The 2008 meltdown in the financial markets also played a role in their rise, according to Chang, who expects to see investors’ preference for TDFs continue to grow over time.

“Especially after what happened in the market in 2008, more investors feel like they’re not equipped to manage market risks on their own,” she says. “Having an expert to create a diversified portfolio that will shift over time along some type of glide path will be embraced by more and more participants and investors over time.”

With a growing share of retirement-designated dollars flowing into TDFs, the funds’ managers have refined their approaches to constructing optimal retirement portfolios.

Research indicates that those portfolios typically include a meaningful allocation to commercial real estate. REITs and listed real estate securities have become a staple of a number of TDFs as a result. For example, research on 33 TDFs collected by Callan Associates in 2009 showed that 73 percent maintained a real estate allocation.

A number of prominent TDF managers already include allocations to real estate. PIMCO and UBS, for instance, have maximum real estate allocations of 15 percent in their funds, while JPMorgan has a maximum allocation of 12 percent.

“REITs offer a hybrid of capital appreciation and income generation. That makes them particularly attractive in a product like target date funds.”

In January, Wilshire published a white paper on the role of REITs and listed real estate in TDFs and real estate equity securities. Wilshire concluded that at the end of the 35-year period from 1976 to 2010, a TDF portfolio with an allocation to U.S. REITs would have had a value 10 percent higher than one without REITs, while also reducing risk.

For investors planning to retire in 40 years, an allocation of up
to 16 percent in U.S. REITs would be an optimal allocation, and
a 7 percent allocation would be optimal for an investor who just retired in 2010.

“In the longer term, you’re trying to capture the capital appreciation perspective of any asset class,” Chang says. “As you move along the glide path to a shorter-dated time frame, what becomes more attractive is the income component provided by REITs. REITs offer a hybrid of capital appreciation and income generation. That makes them particularly attractive in a product like target date funds, because it’s beneficial to have asset classes that can provide different return components.”

Davies says his company uses REITs as part of a larger strategy seeking to gain exposure to real assets. Consequently, Russell has added commodities and listed infrastructure to REITs to create a real assets category for its TDFs.

“They seem to have some common characteristics, certainly around diversification and attractive return opportunities and purchasing power maintenance during periods of high inflation,” Davies says.

Weiss notes that successful target date funds focus intently on both accumulating capital and managing risks. REITs offer a powerful tool to help with the latter, according to Weiss: “REITs address a variety of risks that are central to target date fund management.”

Like a number of asset classes, over time, REITs have seen the correlation between their returns and those of the broader market increase. closer together. To some analysts and investors, this has reduced the value of REIT securities as diversifiers within a portfolio, especially in the aftermath of the 2008 global financial crisis. Yet, Chang, Davies and Weiss all contend that stronger correlations haven’t changed their views on the benefits of REITs in TDFs.

“Everything was correlated in 2008,” Davies says. “Does that affect our view?

I don’t think so at all. We still think the diversification benefits are going to be there going forward.”

“There’s often a misperception that REITs are highly correlated with certain segments of equity markets,” Chang says. “If you look at REITs’ correlations with other asset classes throughout different market environments, you’ll find the diversification attractive.”

In the end, for those TDF managers who do buy into the benefits of REITs, the idea that fund managers wouldn’t include them in their portfolios seems almost unimaginable now.

“It’s a no-brainer to me that you’re going to have REITs in your target date structure,” Davies says.