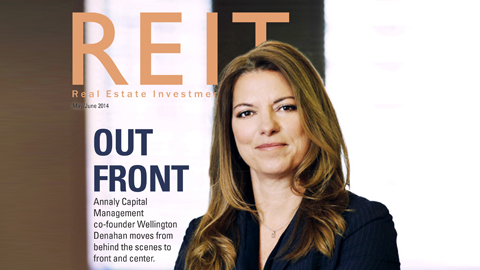 Wellington Denahan might not always have been front and center with outside audiences, but Annaly’s two co-founders worked closely overseeing the firm’s operations and fine-tuning its strategy. She quietly slid into the CEO chair, although not without a little apprehension. Farrell was not only synonymous with Annaly, he was seen as a pioneer in the field of mortgage finance and an icon of the Mortgage REIT sector.

“Mike was larger than life, and it’s difficult to step into those shoes,” Denahan says.

Denahan’s first 18 months on the job haven’t been easy. Amid concerns over the end of quantitative easing and talk of the Federal Reserve raising interest rates, total return from the FTSE NAREIT Mortgage REITs Index fell nearly 2 percent in 2013. Annaly’s total return dropped 18.4 percent for the year.

Yet, Annaly’s straight-talking CEO remains confident in the direction of the company. The first four months of 2014 showed why. The Mortgage REIT thundered back with a total return of nearly 20 percent through the end of April.

REIT magazine talked with Denahan about the challenges of following a legend, the perception of the Mortgage REIT business and her outlook on the future role of the sector in the broader economy.
REIT: Michael Farrell was one of the most prominent figures in the Mortgage REIT sector and one of its most influential voices. Can you give us an idea of what it was like for you early on when you agreed to take on the role of being Annaly’s next CEO?
WELLINGTON DENAHAN:  We had a great partnership and I really miss him. Mike was larger than life, and I think it’s always very difficult to step into a position that follows such a large personality. I can’t imagine what it was like for [Apple CEO] Tim Cook and I feel for the person that follows [JPMorgan CEO] Jamie Dimon.

For 20 years, we were together at every single investor meeting, capital raising and earnings call, so I was not an unknown quantity to investors or analysts, which made the transition a little easier from that perspective.

REIT: What were some of the greatest challenges for you personally? What about the challenges from an organizational standpoint as an executive?
DENAHAN: Organizationally, it’s always a challenge maturing a company when some of your top executive’s experiences are anchored in the past. Those challenges are not unique to me or MREITs. The toughest part is maintaining the best qualities of the past while embracing what’s necessary for the future.
REIT: You had a pretty good idea of what you were getting into with this job, but what has been the biggest surprise?
DENAHAN: I wouldn’t say it has actually surprised me more than reaffirmed that it can be lonely at the top. As far as the job itself, Mike and I worked side-by-side since we started the company, so there weren’t many surprises. We always made decisions together.
I have a great team of professionals and a supportive and experienced board of directors that continue to help guide me in making the best decisions for our shareholders.

REIT: What has been the most important lesson that you’ve learned so far in your tenure as CEO?

DENAHAN: You need to trust your instincts.
REIT: The general perception of the mortgage and mortgage-related securities business seems to be that it is complex and highly specialized. Why is that?
DENAHAN: From my perspective, I think a lot of the complexity comes through misunderstanding or a general lack of knowledge about a market. It doesn’t necessarily mean that it’s complex—it’s just not well understood.

A lot of the uncertainty surrounding these markets has been lifted through the education coming out of the crisis.
The regulators, policymakers and participants understand these markets so much better than before the crisis.
REIT: So you think that stakeholders—investors and policymakers, most notably—have an adequate understanding of what companies such as Annaly do and what their business strategy is?
DENAHAN: Investors, analysts and regulators are better informed than they’ve ever been. Before the crisis hit, I would say there was a very limited understanding of the mortgage market and its interaction with the economy, quite frankly, as well as the housing market and its interaction with the economy.

We have engaged in the process of continuing to enhance our disclosures to address some of the concerns voiced by regulators, policymakers and investors. The market is so much more transparent today. There’s so much more understanding of the market than there was five years ago.
REIT: On a related note, do you ever worry that the public might lump Mortgage REITs in with players in the financial industry that were more involved with the “toxic” assets that precipitated the financial crisis?
DENAHAN:Yes, there’s always that risk of people throwing the baby out with the bathwater. You always have to engage in a process of constantly re-educating.

But post-financial crisis, the public is more versed than they have ever been. Th ey have a much better understanding of the varying degrees of risk within the mortgage market. Really, it’s a matter of distinguishing between the sizes of those markets and the types of borrowers in those markets. I do think there has been a fair amount of press to help our understanding of the diff erences and the risks that people are taking.
REIT: What are the big stories that you see playing into the market dynamics in the near term for Annaly and Mortgage REITs as a whole?
DENAHAN: For our company and the economy in general, it’s still the Fed’s tapering from its unconventional [interest-rate] policy. It’s an unprecedented situation, so there’s no history to look back on and say, “Th is is how things are going to be when you withdraw $4 trillion in stimulus from the market.” Th at’s going to be a big infl uence on asset values across a huge spectrum of investments.

I also think that the forward guidance and how [the Fed] separates its unconventional policy tool of purchasing assets and growing its balance sheet versus the guidance on forward short-term interest rates will be important. From how I look at it, it’s healthy that they are attempting to move the printing presses to the private sector. That comes through in a steeper yield curve and better interest margins for the banking system and better interest margins for companies like ours.
REIT: What about the longer term? What’s next for Mortgage REITs?
DENAHAN: I do think that the REIT market and Mortgage REIT sector, in particular, are still in the very early stages of their growth. Equity REITs had a comparable trajectory and growth coming out of the savings and loan crisis, whereas Mortgage REITs are going to be an important part of the private capital solution following Fannie Mae and Freddie Mac’s ultimate resolution and the Fed winding down its position.

This is a fairly large market that has to be held by private capital. It can’t always be in government hands. Th at was part of the problem with Fannie and Freddie: I’m convinced that if they were REITs, they’d still be around and wouldn’t be in government hands. I do believe the sector is in the early stages of being the ultimate capital provider for the housing market.
Search categories
Capital markets
Company profiles
Management
Mortgage
x