Commercial Real Estate: Back In Demand

As new construction picks up, demand for REIT space shakes off most, but  not all, of the downturn’s drag. 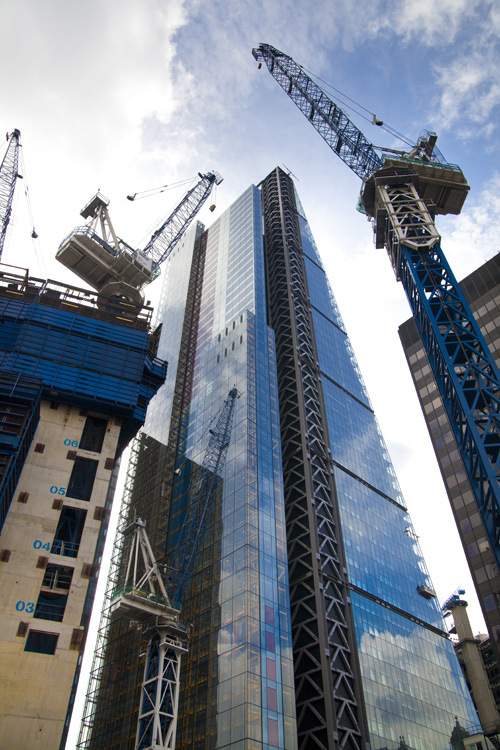 As the financial crisis gripped the global economy, U.S. real estate companies halted development and waited for the panic to end. Now, with economic tides turning, cranes and scaffolding fill many of the nation’s skylines as developers build everything from glitzy new apartments to cavernous industrial space.

“The construction sector is playing catch-up. After having fallen to incredibly low levels in 2008, 2009, 2010, it is coming back up,” says Calvin Schnure, senior vice president of research and economic analysis with NAREIT. “Most sectors, though, haven’t reached prior trends and certainly have not made up for the shortfall of building during the bust.”

In other words, it’s way too soon to worry, especially in marquee cities such as San Francisco, New York, Houston and Chicago. In inflation-adjusted terms, real construction spending is up 54 percent from its bottom value in 2008 and 2009. The sectors with the most growth are multifamily, which has nearly doubled from its trough, and lodging, which has climbed a stunning 75 percent. Office construction, meanwhile, is up nearly 55 percent, says Schnure, adding there aren’t big concerns about overbuilding in that sector right now.

Lodging and multifamily are the only two sectors where construction tops levels from 1994, with real building activity up 53 percent and 26 percent, respectively. Construction activity levels in the office and health care sectors are actually below where they were, in constant dollar terms, two decades ago. Activity is well below where it was in the middle of the prior expansion, he says.

Tech companies are a big driver of current demand, possibly setting up the sector for trouble should this tech boom fizzle – again. Of course, when compared with the days of pets.com, today’s tech giants such as Facebook Inc. and Amazon.com Inc. have more solid business models, making that less likely. Energy companies and related users, too, are gobbling up space, though that could change if oil prices continue sagging.

The new units fill the desire for apartments from consumers burned by the housing crash, and younger renters, who want to be near urban cores and want to be able to easily relocate as needed for careers. This demand – and expectations for even more – is one reason that apartment stocks are one of the top-performing REIT sectors.

If there’s a major scare factor for the sector, it’s that developers could overshoot demand. Some 230,000 additional units are expected this year in the 82 major markets covered by Reis. “The supply pipeline sweeps larger and larger on a weekly basis and presents the greatest risk to the apartment market’s health,” says Victor Calanog, Reis’ chief economist and senior vice president.

Yet, Calanog doesn’t expect vacancy rates to shoot up anytime soon. The firm estimates that there are 45 million people between the ages of 20 and 29 nationwide, and that age group tends to rent instead of own. “This will provide enough demand to keep occupancy from deteriorating significantly,” he says.

The mall, one of the nation’s largest and most profitable, is constantly packed with consumers. It is undergoing a significant revamp that includes the addition of a 100,000-square-foot Neiman Marcus store and a dining district with an al-fresco seating area. The property will feature open and bright common areas with more natural light and mobile device charging areas for tech-savvy customers.

But that kind of development is a rarity in a broader retail sector that is adapting to a changing marketplace. Big name retailers such as Sears Holdings Corp. and J.C. Penney Co. Inc. continue shuttering stores, with millions of square feet of future closings expected. Meanwhile, strip and neighborhood shopping centers are showing signs of recovery as their vacancy rates are below 10 percent for the first time since 2009, according to data from research firm CoStar Portfolio Strategy.

Office REIT Kilroy Realty Corp.’s (NYSE: KRC) new 350 Mission Street property in San Francisco came with a pre-signed tenant, a plus for any developer. The building boasts the open floor plan, high ceilings and energy efficiency that today’s tenants demand. It will be filled by Salesforce.com, an enterprise cloud-computing firm.

Kilroy probably wouldn’t have had such good fortune in the dark days following the financial crisis. However, the office sector is coming back to life. Occupied stock rose by 11.2 million square feet in the fourth quarter, the strongest figure for net absorption since mid-2007, according to Reis. Meanwhile, the gap between completions and net absorptions was at its lowest since mid-2007. That suggests that “while vacancy declines have so far been modest, we may be reaching a tipping point where the vacancy rate may fall faster,” Calanog says.

In late 2014, Prologis, Inc. (NYSE: PLD), one of the world’s largest owners of industrial space, announced a 261,000-square-foot lease in Denver with industrial distributor HD Supply Facilities Maintenance Ltd. The deal, which marked the Prologis Stapleton Business Center North’s second significant pre-lease transaction in less than a year, brings the 1.2-million-square foot, master-planned park to full occupancy. When announcing the deal, company executives pointed out that the city’s market occupancy of 95 percent is a 15-year high.

Net absorption totaled 25.8 percent in the fourth quarter, the highest level since the fourth quarter of 2012, according to Reis. And 2014’s total clocked in at 87.5 million, the best year since the recession. Completions totaled 22.8 million square feet in the period, up 85.3 percent from the prior year, allowing the national vacancy rate to hold steady at 11.2 percent.

In addition to online retailers grabbing industrial space, traditional retailers such as Wal-Mart Inc. and Target Corp. are spending heavily to build out “omni-channel” retail operations, according to Reis.

“E-commerce is growing,” Caton says. Such players account for more than 10 percent of new leasing, up from less than 5 percent four years ago.

Earlier this year, Host Hotels & Resorts, Inc. (NYSE: HST) announced big plans for the Denver Marriott Tech Center Hotel: The space will undergo an extensive renovation “to completely modernize every aspect of the hotel.” Count that as one sign that business travel has recovered from the bust. Leisure travelers are back as well, a dynamic duo for hoteliers.

Occupancies in more than half of the nation’s largest hotel markets have fully recovered to pre-recession highs. In more than 70 percent of metro areas, they’re topping their historical averages, according to CoStar. Cities such as Denver and Houston have occupancies at all-time highs.

It’s no surprise that development is ramping up, including in places that have been quiet. San Francisco is seeing its first significant hotel development in years, while Los Angeles is also getting new rooms, CoStar reports. National occupancies have reached their highest level since the mid-1990s, and room rates have fully recovered, allowing more than half of the major metros to hit record-high RevPAR (revenue per available room) levels, the firm reports.

As with any space, slowing demand and increased delivery could eventually erode fundamentals. For now, at least, “property performance has come a long way from the scary recessionary lows,” notes CoStar, stating what is true for nearly every REIT.

Dawn Wotapka is a contributor to REIT magazine.