REITs Show They Belong as Part of Investment Portfolios

Investors increasingly view REITs as a fundamental part of their portfolios.

While the modern era for REITs dates back to the early 1990s, in a sense they’re just getting started in terms of being viewed by many investors as a fundamental part of investment portfolios. At a time when self-directed retirement plans have become the main method for the bulk of Americans going forward, REITs have shown they belong.

The changing perception reflects a growing realization of REITs’ attractive characteristics. They have paid dividends of around 4 percent, historically have a low correlation to other assets such as other stocks and bonds (reducing volatility), and have been highly correlated to privately held real estate over the long term. 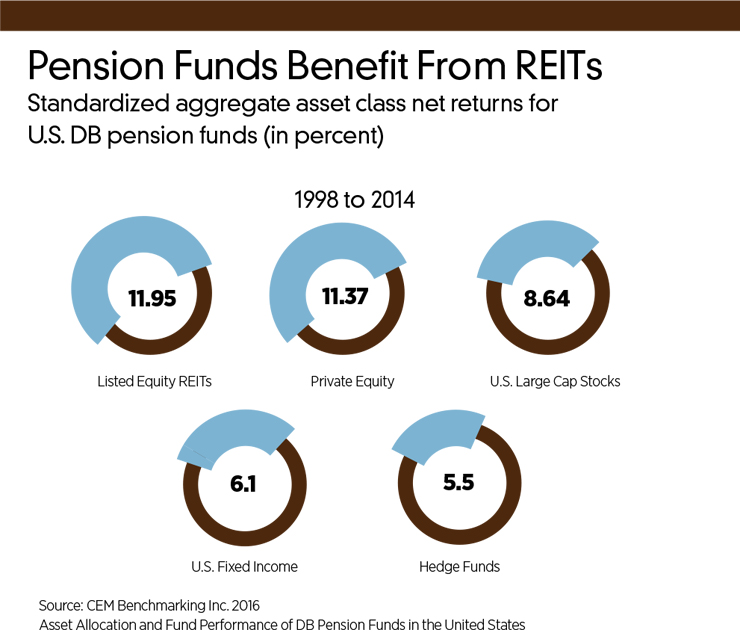 Performance-wise, Equity REITs have demonstrated appeal. While these REITs trailed the 12-month total returns of the S&P 500 as of the end of March, they generated a three-year return of 10.56 percent, compared with 10.37 percent for the S&P 500. REITs have fared well over longer-term horizons too, outpacing the S&P 500 in every five-year increment for time horizons of 15 to 40 years.

Research also has shown that REITs have reduced a portfolio’s volatility while enhancing returns. The standard deviation of a portfolio of stocks and bonds would have been reduced 25 percent with just adding REITs or direct real estate investments and by 45 percent with both, according to research by Glenn Mueller, a professor at the Franklin L. Burns School of Real Estate and Construction Management at the University of Denver.

Research also suggests that REITs basically have helped to boost returns for investors with income-generating portfolios. In fact, adding Equity and Mortgage REITs increased the average annual total return by 15 basis points for an income-optimized portfolio, according to an October report by Wilshire Funds Management. That doesn’t sound like much, but over a 30-year time horizon, it amounts to a higher ending portfolio balance of 4.4 percent.

“REITs are essential to facilitating an investor’s ability to hit the type of income level [required] in a portfolio,” notes Josh Emanuel, chief investment officer at Wilshire Funds Management.

Since the modern REIT era began with a wave of initial public offerings in the early 1990s, it has taken a few decades for REITs to become recognized as part of the real estate asset class. Challenges still remain.

One is metrics. REITs have been grouped by investors with regular stocks. But using price-to-earnings ratios makes them look worse, notes Yablon of Cohen & Steers, because depreciation of REIT assets such as buildings ends up as a big expense under GAAP accounting rules. This drags down GAAP earnings.

Yet, in reality, while REIT assets are depreciated as an expense, on an aggregate basis, they tend to gain value over time, not lose it. This ends up distorting traditional metrics such as earnings per share.

“REITs will never look good on that metric,” Yablon says. “So looking at the P/E multiple doesn’t make a lot of sense.” 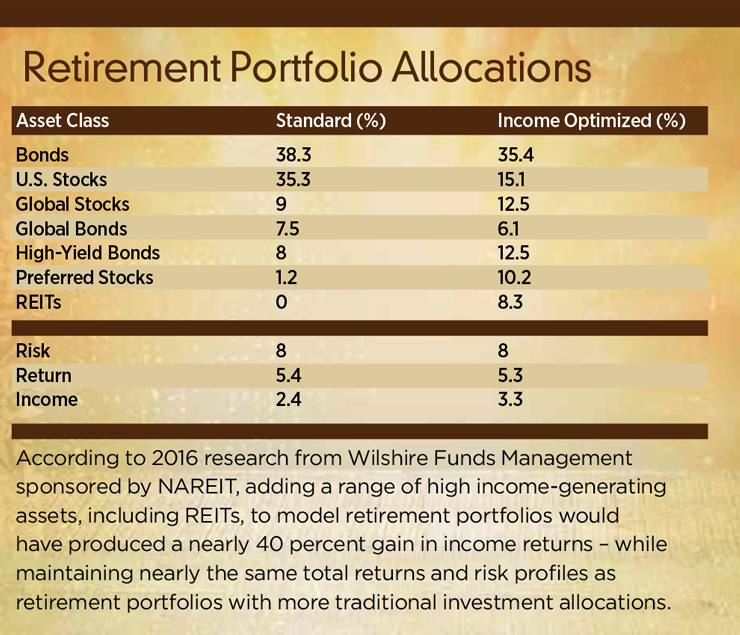 REITs also have been viewed as more volatile than private real estate. This may be true over the short term, due to the liquidity REIT stocks offer investors. In contrast, the changes in value to privately owned real estate assets are not transparent because of the absence of a daily market. Yet, over the long term, REIT returns have correlated strongly to returns of privately held commercial real estate.

“Real estate securities over long periods will trade in line with the underlying asset value of the real estate,” Yablon says. “There is a very large private market willing to buy assets, whether it’s buying directly or buying a REIT to get at those assets.”

Interest rates have played a role in short-term volatility, motivating some panicky investors to sell REITs if rates rise. Yet, that thinking is flawed, according to Mueller.

Pension funds that have shunned REITs have lost out, according to a 2016 study by CEM Benchmarking. In an analysis of asset class returns for defined benefit plans in the United States, the total average annual net return—gross return less expenses—for U.S.-listed equity REITs was 12 percent from 1998 to 2014. That was the highest return of any asset class over the period, compared with 11.4 percent net return for private equity investments. DB plans were less successful with unlisted real estate, generating a net return of 8.6 percent. They fared the worst with hedge funds, getting a 5.5 percent return.

New ETF products coming to market illustrate the growing acceptance of REITs as fundamental to diversified investment portfolios. BlackRock, for example, last November repurposed one of its real estate ETFs to track the FTSE NAREIT Equity REITs Index under the new name iShares Core U.S. REIT ETF (USRT). The product is part of a roster of funds intended to give exposure to equities, bonds, multi-asset and real estate.

“We think there is going to be more growth to come, both in terms of the ETFs and the publicly listed options, as well as a net positive for the private market,” says Dorothy Lariviere, a director in BlackRock’s ETF and index product development and consulting group. “We expect to see more inflows over the long term and the full-market cycle.”

“We do expect there to be more offerings, just given the positive development and the recognition of this asset class as a stand-alone sector,” Lariviere says.