American Assets Trust, Inc. (NYSE: AAT) has stuck to a core tenet since its initial public offering in 2011—that West Coast and Hawaii-focused investment is key to building wealth in real estate.

“I think it’s proved to be a very good decision,” says Chairman, President and CEO Ernest Rady, as he points to the high barriers-to-entry and innovative spirit that characterize the company’s chosen markets.

Based in San Diego, Rady’s home for the past 51 years, American Assets Trust acquires, develops, refurbishes and manages a portfolio of retail, office and apartment properties.

Today, American Assets Trust owns a roughly $4.5 billion real estate portfolio. That’s a far cry from the $35,000 Rady used in 1967 to originally form the company. While Rady owned most of the original private company, a multitude of business partners meant upwards of 300 tax returns had to be filed. In a quest to simplify and offer his partners access to liquidity, Rady eventually opted to go public.

At the time of the IPO, American Assets Trust pondered whether a continued focus on three asset classes was the right way to go. Rady recalls that the underwriters assured him that diversity was how the company’s wealth had been created, so why change the format?

“I’m particularly glad that we are diversified because retail is now considered less of an opportunity by many people. But our office portfolio seems to be doing very well, and our apartments are also doing very well,” Rady says. He rebuffs suggestions that asset diversity has led to the stock price underperforming its peers since the IPO.

“The fact that we are diversified is a source of comfort, frankly—and an access to opportunity,” he says.

American Assets Trust used the IPO funds of approximately $650 million, and about $225 million of equity raised subsequently, to buy properties that were of the same quality as those that formed the foundation of the company, Rady explains.

Analysts agree that quality assets are a defining feature of the company.

“The company should perform better than a lot of the other real estate companies because of the high-quality portfolio,” says Michael Carroll, analyst at RBC Capital Markets.

Haendel St. Juste, analyst with Mizuho Securities, adds, “we have long been fans of the AAT story given its above-average asset quality, locations, discounted valuation and above-average growth profile.”

One of the properties Rady likes to highlight is The Landmark @ One Market Street in San Francisco. The office building is considered one of the city’s most architecturally distinct and historic properties. It was built in 1917 as the headquarters for the Southern Pacific Railroad and served that purpose until 1998. 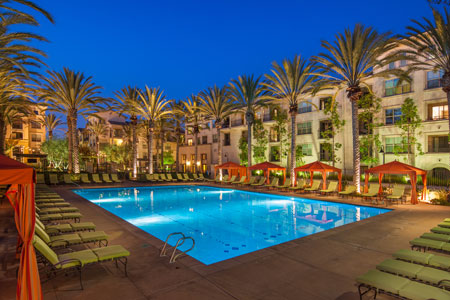 Salesforce is the main tenant at One Market Street with rents “well below market,” according to Carroll. Salesforce is scheduled to vacate the property in three tranches starting in 2019. “While the building may have some downtime, I think American Assets Trust will be able to re-lease at substantially higher rental rates,” he adds.

Rady estimates the company spends about $40 million a year on tenant improvements and maintenance capital expenditures. “There’s no property that is exempt from a thorough examination, at least once a year, as to an opportunity to upgrade and enhance,” he says.

And upgrading makes a lot more sense than acquiring assets, Rady points out. “The disparity between the public market valuation of REITs and the private market valuation is as wide as I’ve ever seen it in my lifetime,” Rady says. “That’s why we take our cashflow and available funds, and spend it on upgrading what we have, which would produce a higher return than buying something at the lofty prices that exist today.”

The company’s biggest repositioning project today is the Waikele Center in Honolulu, a 43-acre site in a highly-developed area with half a mile of interstate frontage. It’s an “irreplaceable asset” that has enjoyed close to 15 years of solid same-store growth, according to Rady.

A Kmart store at the site is due to vacate at the end of June. “There’s lots of interest in the Kmart building. We’ll just have to see who we can get in there that would add the most value to the property,” Rady says. In addition, American Assets Trust is working to finalize a lease with a national grocer to fill space at the center formerly leased by Sports Authority.

Once the repositioning is complete, “I think that will be another very good center,” Carroll says.

And while improving net asset value (NAV) for shareholders is Rady’s overarching goal, an equally important objective for the company is maintaining transparency. Indeed, American Assets Trust has been named to Forbes’ list of America’s 50 most trustworthy financial companies for three years in a row since its IPO.