How Deleveraging Strategies are Creating Payback for REITs

REITs are finding less is more when it comes to leverage.

A decade after the financial crisis, REITs are reaping the benefits from steps taken to shore up balance sheets by, among other things, recalibrating levels of leverage.

While the jury is still out on how much of a factor leverage and other balance sheet issues actually played in how REITs fared during the crisis, the experience forced the industry to re-examine financial strategies by lowering debt in addition to adopting more conservative development profiles and enhancing the credit quality of portfolio assets.

“There was an overall sense that the REITs that suffered the most severe effects during the liquidity crisis were those with the most debt with short-term maturities,” says John Worth, executive vice president, research and investor outreach, at Nareit. “There has been a push from the investor side to see less leverage and to have a different capital stack, and REITs have clearly responded to that.”

According to Nareit data, debt relative to book assets for U.S. equity REITs has come down from 58.3 percent at the peak in 2008 to 48.4 percent. Another metric that shows how REITs are in a better position to service that debt is interest expense as a percentage of net operating income (NOI), which has dropped from 38.0 percent to 22.4 percent over the past decade.

“Lower leverage is great for the industry, especially at a time when many private equity-backed companies have been increasing their leverage,” says Michael Torres, principal, CEO, and portfolio manager at Adelante Capital Management. “This may temper some of the outsized returns that we have seen historically, yet the volatility should be dampened as well.”

In addition to lowering leverage, the REIT industry has done a “fantastic job” of laddering maturities, adds Torres. Generally, REITs have structured loan maturities so that no more than 10 to 15 percent of liabilities mature in any given year. Even with laddered maturities, financial stability depends on what kind of strain is going on, not only in the real estate industry, but in the capital markets overall. 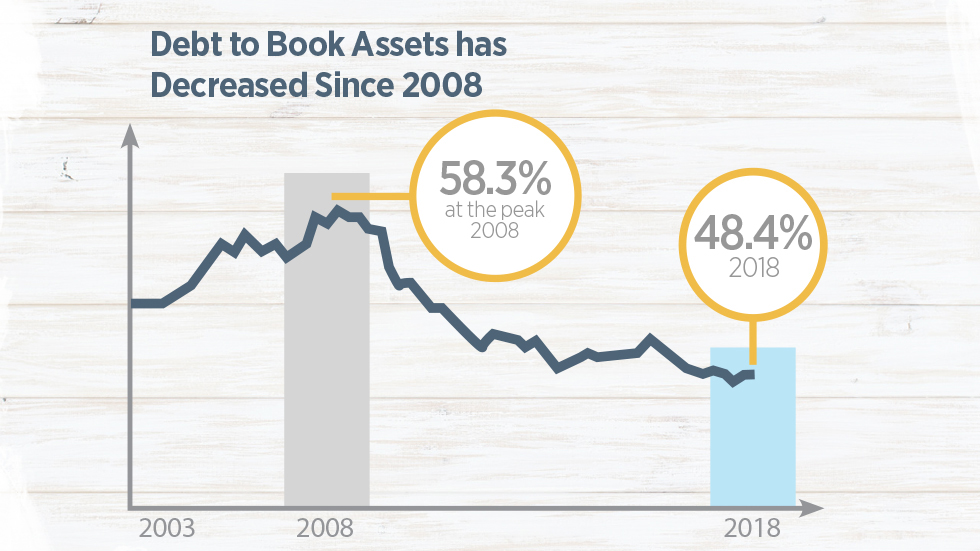 “The whole idea here is to smooth out maturities, which allows REITs to avoid big fluctuations in their cost of capital over time,” Torres says. “I also think that’s a good thing from a transparency and disclosure standpoint, because not only are the companies satisfying equity investors with the disclosure, but they are routinely coming back to the fixed income and credit markets to confirm the worthiness of the asset portfolios,” he says.

Yet some investors are not recognizing that REITs have made a big strategic move to reduce leverage that has put them in a stronger position. “Unfortunately, when we talk to generalist investors who are not looking at REITs every day, they often believe that REIT leverage and debt are at the same leverage levels as they were in 2008, and they have missed the story that REITs have de-levered significantly,” says Worth.

One reason for that disconnect is that REITs still carry higher levels of debt compared to other sectors such as industrials, consumer discretionary, and utilities. However, it is important to note that REITs can sustain higher leverage levels because of their underlying assets, Worth notes. REITs are holding hard assets on their balance sheets in the form of buildings and land that are transferable and can be more easily financed.

There has been deleveraging broadly across the REIT sector over the past decade. “REITs have adopted more conservative financial policies and are in really great shape from a credit perspective,” says Stephen Boyd, senior director, U.S. corporates – real estate & leisure, at Fitch Ratings. 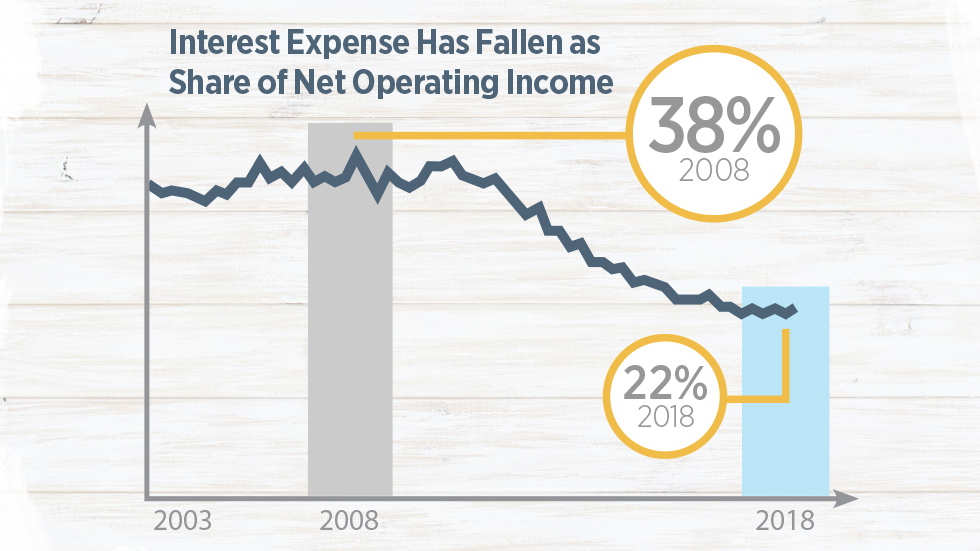 Reducing leverage and shifting financial strategies certainly did not happen overnight. The shift has been gradual over the past decade, with data suggesting that the industry has settled on a bit of a plateau. “Depending on what happens with the interest rate environment, we are possibly at a point where we might see leverage creep up slightly,” says Worth. “However, the bigger point here is that there has been a significant change in the way REITs do business.”

There are plenty of success stories of companies that have significantly reduced leverage and improved balance sheets. “Recessions are a wonderful way of getting people to focus on reality and get back to the basics,” says James Connor, chairman and CEO of Duke Realty Corp. (NYSE: DRE). Pre-recession in 2007 and early 2008, Duke was involved in a lot of different property types and was aggressively engaged in spec development across the country. When the recession hit, Duke was vastly over-levered on top of running a very complex business model, notes Connor.

Duke executives came up with a strategic plan in 2009 to simplify both its business plan and improve its balance sheet with most of the heavy lifting occurring from 2010 to 2016. Its strategy involved a combination of issuing equity when pricing was favorable to pay down debt, as well as selling off non-core assets and using the proceeds to pay down debt.

Comparing metrics from pre-recession to current debt levels shows noted improvement. At the end of 2007, net debt to EBITDA was 8.7x compared to under 5.0x now, while debt and preferred stock versus gross assets on a book basis has improved from 56 percent levered to 30 percent today. Duke’s credit rating has benefited from that shift with upgrades to a BBB+ rating with bonds that trade similar to an A company, Connor notes.

SL Green Realty Corp. (NYSE: SLG) has a similar story. Coming out of the last financial crisis, the REIT’s debt level was about 10x debt to EBIDTA and in the low-to-mid 50 percent range on a loan to value (LTV) basis. “Because we wanted to diversify our capital sources and access the bond markets, we began a wholesale program to consciously reduce leverage and get an investment grade rating,” says SL Green CFO Matthew DiLiberto. 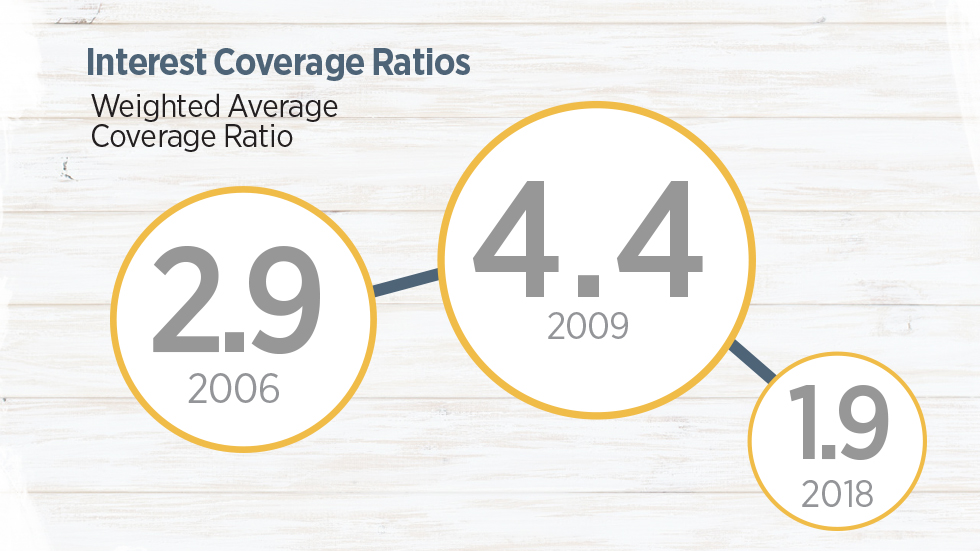 Over the course of several years, the REIT has successfully reduced its leverage to between 7.0 and 7.3x debt to EBIDTA and LTV in the low 40 percent range. “That took a significant amount of effort, but we were rewarded with an investment grade rating,” says DiLiberto. SL Green also has been able to access the bond market more frequently, routinely about once a year, because of the credit rating. “We feel like we have a great story to the upside, and in a downside scenario we think we are very well protected with a low leverage position in the New York City market, which is the most resilient market in the country,” he adds.

From an equity investor’s perspective, balance sheets are less appreciated in the current market by equity investors, where the number one priority is still earnings growth. “The real payday is when we go to issue bonds, which we did in the third quarter of 2018,” says Connor. Duke’s bond issuance traded at a very attractive spread, which Connor credits to the company’s “A quality” metrics. Connor also expects the REIT’s lower leverage to pay dividends in the next downturn. Duke is now under-levered with roughly $1 billion in dry powder when including its capacity to add more leverage.

“We couldn’t play offense in the last cycle. We were strictly playing defense trying to figure out how to de-lever the balance sheet and when to issue equity,” Connor says. “If the recession hit tomorrow, we would truly have an opportunity to play offense, and when and if we needed to borrow money, money would be readily available to us.”

Camden Property Trust (NYSE: CPT) also has seen its credit rating rise thanks to its deleveraging strategy. In 2009, Camden’s debt level based on debt to EBITDA was over 8.0x. “What irritated me the most is that there were a lot of opportunities and value we could have created if we had less debt during that period,” says Ric Campo, chairman and CEO of Camden.

Camden has worked to steadily reduce that leverage to 4.0x today by selling properties and raising equity. The company also has been rewarded with a higher credit rating and is one of the few REITs that has an A rating or equivalent from all three ratings agencies. “We fundamentally believe that rating and low debt create a greater degree of financial flexibility going into the next downturn,” says Campo.

Going forward, Camden’s strategy is to be opportunistic on issuing equity and adding leverage so that it keeps its leverage in a range between 4.0x and 5.0x debt to EBITDA. For example, Camden issued $328 million in common stock at the end of February that it used to pay down debt. “Because stock prices are fairly robust right now, the differential between issuing equity and debt is pretty close in terms of cost,” says Campo. So, even though it was slightly dilutive, the effort was worthwhile because it allowed the REIT to reduce its leverage further and improve its balance sheet.

Yet REITs also recognize that there is a trade-off in accepting lower growth in exchange for lower debt. “In certain times, the market doesn’t pay you for lower risk,” says Campo. “But over a long period of time, you don’t get penalized for having a better balance sheet as long as what you’re giving up in growth is not dramatic.” For example, Camden’s total annualized shareholder return over the past decade has exceeded the average of its multifamily peer group. The REIT also had the second highest same property revenue growth and NOI growth in the multifamily sector last year. “Despite Camden’s low leverage, we continue to post really strong revenue growth, NOI growth, and FFO growth,” he says.

Fitch expects REIT sector leverage to remain relatively steady during 2019 with same-store NOI growth and incremental development NOI that should help moderate leverage. That being said, Fitch noted in its 2019 REIT Outlook that many REITs will need to sell assets to overcome public share NAV discounts and fund external growth while working to maintain leverage policies. REITs may need to be creative to fund new investments on a leverage neutral basis or let leverage drift up in the hopes that valuations will improve, and they will be able to issue equity down the road, notes Boyd.

That being said, the move to lower leverage appears to be a fundamental shift within the REIT industry. “I think that this trend for lower leverage is sustainable through the cycle, and that is a key credit positive,” he says.