The mortgage real estate investment trust raised about $200 million through an initial public offering of stock, at $15 per share. Initially, Annaly Capital Management (NYSE: NLY) had a 25 percent stake in the REIT, which is now down to 12.5 percent.

“The strategy has been to participate as a funding source for commercial real estate and primarily to serve as a gap funding provider,” says Kevin Riordan, president and CEO of CreXus. “Our goal was to fill the gap between people who had lower risk tolerances, more senior risk positions and what was required to finance the transaction. We would do that via a variety of instruments, but the financial objective is to obtain double-digit, attractive return deals.”

To that end, the mortgage REIT provides, depending on opportunities presented by the economic cycle, mezzanine and other subordinate financings, as well as first mortgage loans. The REIT may also invest in commercial mortgage-backed securities (CMBS) and other commercial-real estate debt instruments and make direct investments in commercial real estate properties.

In the beginning, the REIT used financing from the government’s Term Asset-Backed Securities Loan Facility (TALF) to purchase CMBS. However, the opportunities in distressed lending did not turn out to be as great as the REIT had anticipated, which meant fewer investing avenues for CreXus.

Steven DeLaney, director of specialty finance research with JMP Securities, says one significant deal helped give the firm a jumpstart.

“It was a little slow starting,” he recounts. “The big event that changed this company dramatically for the positive, although it created some controversy, was that they had the opportunity to buy the Barclays portfolio in the second quarter of 2011.”

The approximately $586 million purchase, bought at a discounted rate of about 80 cents on the dollar, included commercial mortgage loans, subordinate notes and mezzanine loans backed by hotel, retail, office and multifamily properties.

One advantage that CreXus had from the start is the strong reputation of Annaly Capital Management and CreXus’ external manager, Fixed Income Discount Advisory Company (FIDAC), a wholly owned subsidiary of Annaly. DeLaney credits Annaly’s connections for CreXus’ successfully completing the deal. “They were able to source and acquire that portfolio outside of any competitive bidding process,” he says.

The Barclays portfolio had also attracted the attention of Starwood Property Trust, which put in a bid to take over CreXus, valuing CreXus shares at $14 each. The REIT rejected the Starwood offer and raised most of the funding for the Barclays portfolio acquisition through a public offer of shares at $11.50 each, for proceeds of about $540 million. Annaly also provided funding by making an additional investment in the REIT. CreXus shares had a book value of more than $14 at that point, but the shares were priced lower in the public offering because of the REIT’s relatively low dividend yield at that time, DeLaney says.

With the Barclays portfolio acquisition, CreXus was able to generate strong earnings and boost its dividend yield to an attractive level. 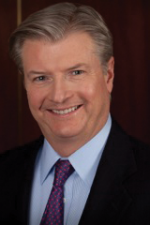 Our goal was to fill the gap between people who had lower risk tolerances, more senior risk positions and what was required
to finance the transaction.

As for other investment opportunities, the REIT is interested in all sorts of commercial real estate.

“We don’t redline any asset classes,” Riordan says. “We are not taking equity risks. We are just looking for a current cash flow stream to convert into dividends to pay shareholders.”

In order to source attractive mezzanine investments, the REIT works with Wall Street or with a senior lender to simultaneously fund a subordinate loan. CreXus also does first mortgages, looking to sell the senior “A” note of the loan while retaining the junior “B” note for its portfolio.

Such arrangements are possible due to the relationships built by CreXus’ management team over the course of their careers, DeLaney points out. For example, Robert Karner, CreXus’ head of investments, spent time at Principal and Morgan Stanley previously. And Riordan was with TIAA-CREF, the pension fund manager that invests in commercial real estate.

With the beneficial impact of the Barclays transaction winding down, the question on the minds of investors and analysts is what’s next for CreXus.

DeLaney sees two major opportunities for CreXus in the small commercial real estate lending market and in making bridge loans on transitional properties. These loans are typically in the $7 million to $15 million range and are mostly not of interest to the CMBS market, which prefers larger loans.

These opportunities are not yet reflected on the REIT’s balance sheet, according to Delaney, and doing so would mean that CreXus would need to develop its own origination network, either on its own or through a joint venture.

About the potential for the REIT to take advantage of such opportunities, Riordan notes that CreXus “is prepared to take advantage of opportunities throughout the commercial real estate finance market.” One of CreXus’ major strengths is that it doesn’t have any debt financing on its books and can take on more debt to make additional loans. Considering that it has had success in its mezzanine originations in the last year, it appears that the REIT has a solid base to build on.

“I think their opportunity is excellent. It really comes down to this company’s execution and their ability to compete to acquire assets,” DeLaney notes. “They are not fully integrated – they don’t have their own employees and platform that’s been built over 20 or 30 years. Their success will largely depend on how strong their networking capabilities are. They need to use the same capabilities that allowed CreXus to find the Barclays portfolio. Use those connections and broaden out.”