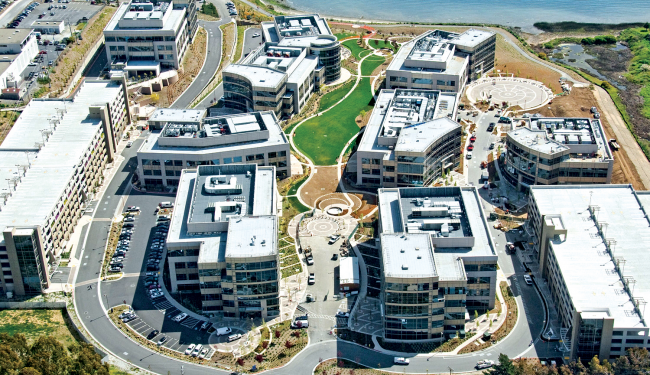 Demographics and steady demand have, in part, immunized the health care property sector against the pressures of the economic downturn.

Whitman says health care REIT performance ranked above all other sectors over the past year and gained an average of 14 percent over the past five years.

James Flaherty, III, chairman and CEO of HCP Inc. (NYSE: HCP), says health care is the only REIT sector with demand driven by aging baby boomers rather than by employment or consumer spending.

“You can’t turn off the sick button just because times are bad,” says Ed Aldag, CEO of Medical Properties Trust (NYSE: MPW), which invests in hospitals.

“The over-85 segment of the population is growing three times faster than the national average,” says Lori Wittman, vice president of capital markets for Ventas Inc. (NYSE: VTR), which invests in a broad range of health care assets including medical office buildings, senior housing and skilled nursing centers. “For example, of the more than 9 million seniors over the age of 80, approximately one in eight lives in seniors housing. Because it is need-based, seniors housing has been the second strongest real estate sector in the last year, fueled not only by an aging population but also some improvement in home sales.”

While demographics and demand are positive factors, changes in government health care policies and an increasing emphasis on cost-cutting could influence this sector, particularly skilled nursing facilities. The majority of patient costs at those facilities are paid by Medicare.

The impact of the Affordable Care Act on the health care sector remains uncertain.

“On the one hand, there will be 30 million additional consumers insured, which ought to be a benefit to health care REITs,” Milam says. “On the other hand, they will all be funded through Medicaid and that program is already under pressure to cut costs.”

Wittman says the health care overhaul should be a “modest positive” for medical office buildings because of the pressure to move services to the lowest cost setting rather than a high cost hospital emergency room.

“There may be a modest negative impact on skilled nursing and long-term acute care hospitals as the government looks for ways to cut costs, but, on balance, I think the impact will be felt most by insurance companies and hospitals,” Wittman says.

Hospital systems are rapidly consolidating as part of their cost-cutting efforts.

Health Care REIT’s acquisition of Sunrise Senior Living in August 2012, and HCP’s deal to acquire 133 senior housing communities were the latest in a series of acquisitions by health care REITs.

“We anticipate, in part because of the consolidation among our operating partners, a reciprocal increase in transactions in health care REITs in the next couple of years across-the-board in every type of health care property,” Flaherty says.

Flaherty says many people are not aware that while a significant percentage of regional malls, for example, are owned by public REITs, only about 10 percent of health care properties are currently owned by REITs. He believes that within the next five years, as much as 30 percent of health care properties could become part of REITs, representing $50 billion in transaction volume.

“There’s been a tremendous amount of consolidation over the past two years, especially on the senior housing side,” Milam says. “Health care REITs own 12 to 15 percent of the total number of health care facilities in the U.S., so they have room to grow. One way to combat reimbursement pressure on health care providers is with economy of scale. REITs fit into that very well.”

“Hospitals are better off reinvesting in operations and innovations rather than in real estate,” he says.

Aldag says he expects Medical Properties Trust to acquire approximately $700 million in assets by the end of 2012 and to have a similar level of acquisitions in 2013.

“Right now all the health care REITs are hugely acquisitive, particularly of medical office buildings,” says John Roberts, senior vice president, director of research and a REIT analyst with Hilliard Lyons. “In addition to private purchases, I think some of the larger REITs may target some of the smaller REITs.”

Roberts says only skilled nursing facilities lack buyers, primarily because of the government reimbursement factor. Separate “memory care” centers that cater to patients with Alzheimer’s will be in high demand, says Roberts, since the number of people with the disease is anticipated to increase.

"Hospitals are better off reinvesting in operations and innovations rather than in real estate."

Besides the fact that medical spending is usually a non-discretionary expenditure, the structure of health care REITs also add to their stability.

“Health care REITs cannot operate health care facilities; with the exception of medical office buildings, which is a vertically integrated business, they just own the real estate,” says Wittman. “Through management contracts on senior housing we do own the profit and loss while the management company is responsible for the operations of the communities.”

Most health care REITs have a triple net rent model so that tenants are responsible for real estate taxes, insurance and maintenance, providing cost stability for the REIT in exchange for a lower rent.

Milam says that many health care REITs have tenants that lease 10 to 20 facilities, which also adds consistency.

“We’ve been able to diversify this way while staying within the health care sector,” Flaherty says.

Ventas shifted its portfolio away from skilled nursing facilities, which represented 100 percent of their business in 1999, to a diversified portfolio that also includes medical office buildings and senior housing. Wittman says 80 percent of the company’s revenue now comes from private payments rather than government reimbursements.

While some health care REITs specialize in one property type, even those that do are diversified geographically throughout the U.S.

“A good location in the health care sector is about proximity to a particular hospital system rather than a particular city or region,” says Milam. “The only exception is senior housing, where we’re seeing stronger growth in wealthier areas, especially in the coastal regions.”

In spite of the uncertainty surrounding health care policy changes and the pressure to cut costs, health care REITs are expected to continue to be a stable investment.

“Right now we’re in the early stages of continued positive momentum in health care REITs, with above average dividend yields, and that’s bringing in investors,” Milam says. “As long as interest rates stay low, health care REITs will have access to cheap capital, which, when added to demographic trends, should continue to provide stable cash flow and rising dividends.”

Subsectors of the Health Care Sector

While some health care REITs own all types of health care properties, others specialize in one of several subsectors.

Senior housing, which includes assisted living facilities, independent living facilities and memory care centers, is the market sector within health care that is most susceptible to economic conditions because families usually pay for these facilities themselves, Sandler O’Neill’s James Milam says.

“Within senior housing, assisted living is less economically sensitive because usually when someone needs that help they have to move,” Milam says. “With independent living, the business cycle and the housing market decline meant that there were more vacancies in 2009, but we’re seeing that subsector come back now.”

Ventas’ Lori Wittman says that cost-cutting measures are putting pressure on health care providers to move to the lowest cost setting for health care needs, which means that medical offices are likely to be the beneficiaries as procedures and visits move from hospitals and emergency rooms to outpatient facilities.

Cuts in reimbursement tend to hit this sector hardest, says Hilliard Lyons’ John Roberts. He says the government also controls supply by requiring a certificate of need before a facility can be built.

On the positive side, Milam says skilled nursing facilities are a very stable business.

“As long as you have a good management company that can manage costs efficiently, skilled nursing homes can be a high yield asset,” he says.

“Hospitals are the lynchpin of the health care delivery system and that makes them a safe, stable place to invest as long as they are managed efficiently,” he says.