Mind Your Own Business 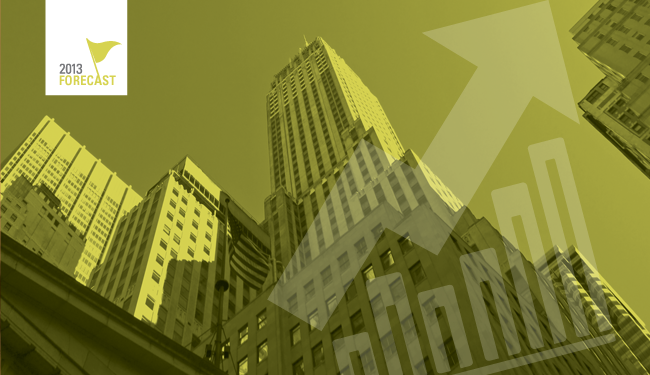 In the current economic climate, REITs that target business customers can be placed in two distinct camps.

One side consists of REITs concerned primarily with existing tenants. Think office landlords.

On the other side of the fence are firms that are competing to capture new customers. These may include technology-driven real estate strategies, such as American Tower Corp. (NYSE: AMT), a pioneering infrastructure REIT.

Michael Knott, managing director with Green Street Advisors, paints a picture of an operating environment for business-focused REITs that, while not dire, isn’t exactly inspiring, either.

Whichever side of the fence they’re on, business-intensive REITs are all still dealing with a host of similar issues as the calendar flips from 2012 to 2013.

For Office REITs, It’s All About Jobs

“Certainly the economic downturn of the last four years has impacted us all,” says Donald Miller, president and CEO of Piedmont Office Realty Trust Inc. (NYSE: PDM). For office REITs such as Piedmont, that impact has taken the form of fewer jobs, which translates into less demand for office space.

The unemployment rate has hovered around the 8 percent mark for roughly four years, which invariably puts a squeeze on the office sector. In light of the struggles in the jobs market, Miller says sustaining occupancies and rents has proved difficult for his company.

Knott says Piedmont’s not alone in that regard. Even as a limited number of jobs have been added back to the labor force, it has yet to produce material demand for more space, he says.

Exacerbating the effects of the diminution of the office work force have been companies’ collective efforts to do more with less. “Office tenants have been targeting ruthless efficiency,” Knott notes.

That has only served to heighten concerns for the sector.

“We have had some tenants downsize at renewal, both because of business contraction and because of more efficient space usage resulting from technology advancements and the ability to allow telecommuting scenarios,” Miller says. “As far as new tenancy is concerned, space efficiency has been a key theme over the last couple of years.”

From a geographic standpoint, Hans Nordby, managing director of PPR, maintains that office market regional performance is stratifying based on the local economy. For example, investment in software and technology has averaged approximately double-digit growth in the course of the last two years. As a result, Nordby says demand for office space has held up in tech epicenters, such as California’s Bay Area, Seattle and Austin, Texas. Meanwhile, he points out that regions that rely on government and finance, including Jacksonville, Fla. and Sacramento, Calif., are struggling.

“Overall, when you look at the office sector, whatever businesses are driving different markets tie up pretty well to which markets are doing well,” Nordby says.

Gerard Sweeney, president and CEO of Brandywine Realty Trust (NYSE: BDN), says those trends have produced an “uneven” recovery between markets. Overall, it has brought improved performance for his company that he is projecting to build on in the coming year. As far as the story goes in 2013, expect more of the same. 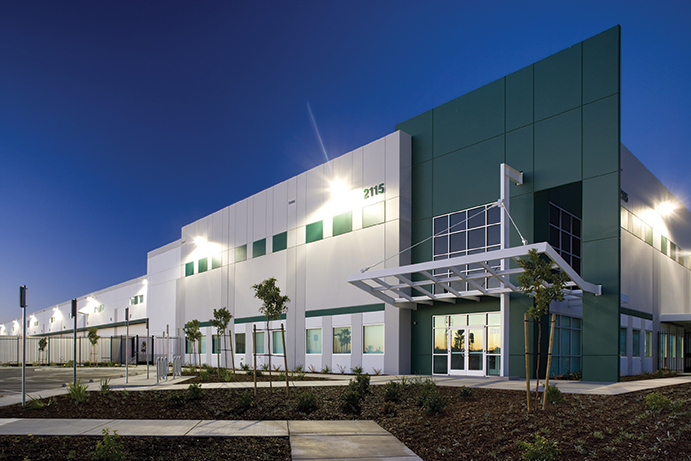 “Office performance is substantially driven by employment growth—it’s just that simple.  So, until the economy starts creating substantial new office using jobs, demand for office space will be limited and performance will be weak,” Markling says.

For REITs in the industrial sector, the story is simple, according
to Nordby.

“Demand for industrial space is almost perfectly correlated with GDP growth,” he says. Consequently, with GDP growing modestly in the midst of the recession, demand is being pushed up as well. Even better for the sector, Nordby says the supply of new industrial properties is essentially zero.

Moghadam notes that global occupancy for Prologis’ portfolio currently stands at 92 percent and climbing. He also says he’s anticipating “significant growth” in rents in the near term. Looking ahead, Moghadam says he’s anticipating the ongoing shift towards online commerce to continue to benefit his company.

“Many large-box retailers are still in the early stages of building out their e-commerce platforms and need distribution facilities,” he says. “As everyone expects, online shopping will only get bigger, and the need for a more established supply chain around e-commerce will continue. Retailers want to partner with us because we have the largest global portfolio and most robust development engine to support their e-commerce distribution.”

The prolonged economic malaise has had some upside for best-in-class industrial real estate owners and operators, according to Phil Hawkins, president and CEO of DCT Industrial Inc. (NYSE: DCT).

“In a slow-growth economy, our customers are very focused on managing the costs and speed of their supply chains, and a key component of this effort is upgrading, reconfiguring and consolidating their distribution locations,” Hawkins says. “We have certainly been a major beneficiary of this trend, given the quality of DCT Industrial’s assets and locations.” 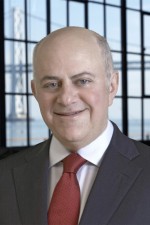 Check out the Q&A with Prologis CEO, Hamid Moghadam

Hawkins notes that DCT leased a record 9.2 million square feet of industrial space in the first half of 2012. While activity has dipped below that “torrid pace” in the second half, according to DCT’s CEO, the strong operating results reflect how businesses are approaching the economic environment going forward. Looking ahead to 2013, Hawkins says his company is “maintaining a cautiously optimistic view of the recovery” and anticipating demand for space in the industrial sector to be consistent with ’12.

“It seems as if businesses have become accustomed to this slow-growth environment and are essentially managing through it as best they can,” Hawkins explains. “Rather than crawl into a shell as virtually all businesses did in 2009, companies are focused on executing their business plans and doing what they can to become even more competitive.”

Moghadam also says the potential recovery in the housing market should pay dividends for the industrial sector: “When someone moves into a new home, they typically remodel, buy new furniture, and purchase a number of goods that all need to be stored in warehouses before they’re delivered. It impacts all areas of the supply chain. In particular, we would expect housing demand to have a significant impact on companies getting funding for smaller warehouse spaces.”

Hawkins cites the demand for industrial space from smaller users, including the homebuilding industry, as the biggest variable that will impact the sector’s performance in ’13. These customers have gradually increased their demand for space through the last year, he says.

“My sense is that the confidence of small and medium businesses is more fragile than larger companies and therefore will be the source of both more risk and more upside relative to expectations in 2013,” he says.

What will drive the growth throughout the industrial sector in the coming year differs depending on where you are, according to Moghadam. In the United States, it will be global trade and rebuilding customer inventories. In the less developed economies of Brazil, China and Mexico, on the other hand, domestic consumption should push up demand for industrial real estate. Moghadam notes that Japan presents opportunities for industrial companies as the country works to reconfigure its supply chain.

“We have big development plans for Japan in 2013 and beyond,” he says. 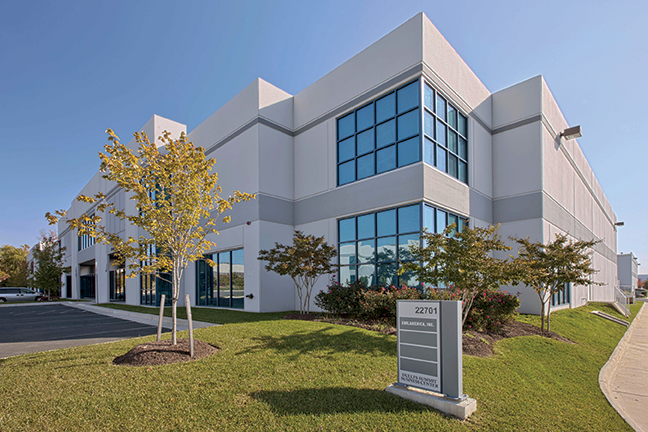 REITs serving technology-related businesses have enjoyed a prosperous 2012 and are expecting that to continue through 2013.

Headquartered in San Francisco, Digital Realty Trust Inc. (NYSE: DLR) provides its customers with data center facilities. CEO Mike Foust says Digital Realty, whose stock was up roughly 6 percent for the year through mid-September, has seen steady demand for space at its sites as companies have increasingly turned to information technology strategies to cut costs and enhance operational efficiencies. These same tenants feel confident about the state of their businesses and plans heading into the new year, according to Foust.

“We see that reflected in the data center initiatives that many companies have, especially the larger corporate enterprises that are moving ahead with plans to consolidate various departments and various locations into new facilities that are better designed to provide more operational flexibility,” he says. “Companies are looking at pretty significant new commitments to new facilities, because they see the savings in productivity and operating costs.”

Boston-based American Tower, which converted to a REIT at the start of the year, owns and leases wireless and broadcast communications-related sites around the world. It also helps companies outfit their properties with technology to enhance their indoor and outdoor wireless network coverage. The company’s stock was trading at $71.36 per share in mid-September, a gain of 18 percent from the start of the year.
“Our business is growing in the United States because the demand for tower space is the result of the exploding phenomenon of smartphones, tablets and laptops,” says James Taiclet, American Tower’s chairman, president and CEO. He contends that his company’s business tends not to be cyclical, aided by the fact that its tenants generally sign long-term leases of five to 10 years. The firm has witnessed “strong” demand for cell tower space in ’12, according to Taiclet, a trend that isn’t showing signs of slowing in ’13. 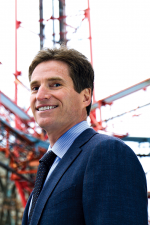 There should be some very good catalysts and continuing growth trends for us both in the United States and internationally next year.

As American Tower generated approximately 70 percent of its revenue in the first half of this year from its activities in the United States, the firm has continued to make targeted investments abroad. Those include markets such as Mexico and South Africa in which wireless carriers are attempting to ramp up data services, as well as less-developed markets such India and Ghana that need to continue building out voice networks.

“For the first time in American Tower’s history, the company’s growth in the international sector exceeded growth in the domestic segment,” Taiclet says. “Even while U.S. growth remains very strong, we expect even more growth internationally going forward.”

Taiclet also points to expectations that wireless carriers will continue their 4G network deployments in the coming year as yet another sign American Tower should enjoy “robust growth” in the coming year. He notes that new versions of Apple’s iPhone and Amazon’s Kindle reading device should increase demand for more bandwidth.

“There should be some very good catalysts and continuing growth trends for us both in the United States and internationally next year,” Taiclet says.