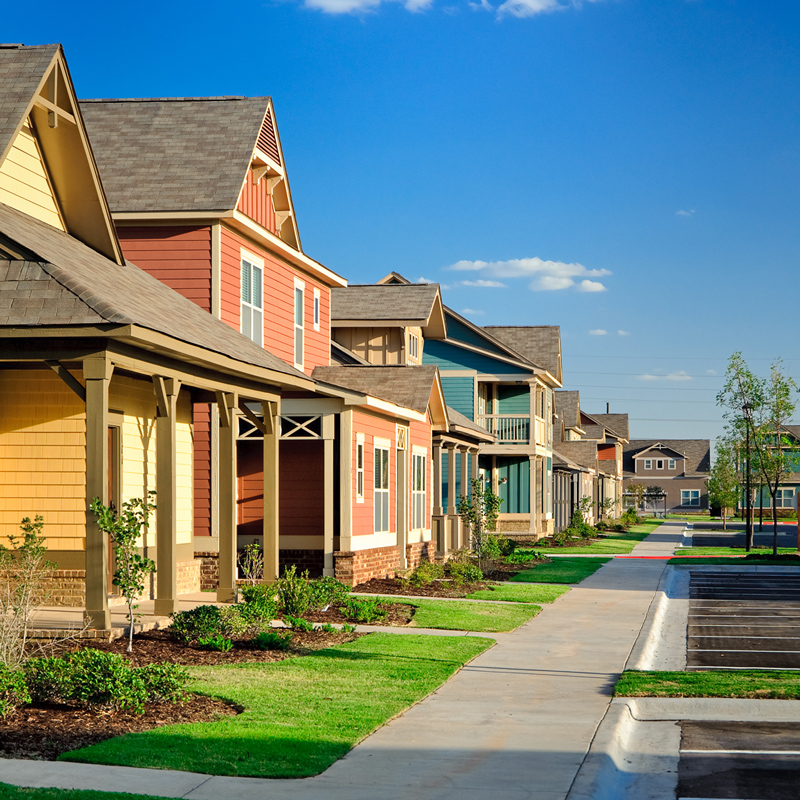 Baby boomers who lived in a cinderblock dorm room with three roommates and a communal bathroom may feel a twinge of jealousy when they drop off their kids at posh college housing that resembles a four-star hotel. Resort-style swimming pools, tanning salons, fitness centers, sand volleyball courts, fire pits, cafes with wood-burning fireplaces, and bedrooms with walk-in closets and private baths may sound like features in an upscale apartment complex, but these are just some of the elements that developers now include in new buildings for undergraduate and graduate students.

Bill Bayless, CEO of American Campus Communities (NYSE: ACC), says that until the mid-1990s, student housing was ignored by property developers, who failed to see the opportunities to replace traditional dorms built in the 1950s to 1970s.
“Most universities only provide housing for 20 percent of their students, traditionally freshmen,” he says. “They force them out after that into off-campus housing, often dilapidated buildings owned by absentee landlords. Our buildings allow each student to have their own bedroom and bath and meet their desire for health and fitness and access to technology.”

“We want to create an environment to complement academics with our own programming and social, cultural, educational and recreational activities,” he says.

The three largest student housing REITs are led by individuals with deep experience in the property sector. EdR (NYSE: EDR), which went public in 2005, has a 50-year history in student housing that helps the REIT manage day-to-day operations as well as a long-term development strategy, says Randy Churchey, EdR’s CEO.

Twenty years ago there was no such thing as “purpose-built” student housing, says Ryan Meliker, managing director of REITs and lodging equity research at MLV & Co. Today, “investor interest in student housing has proliferated… and there’s still plenty of room for growth,” he says.

Many colleges and universities have already outsourced their food services and bookstores, so outsourcing their student housing isn’t as much of a stretch as it might seem, according to Alexander Goldfarb, managing director and senior REIT analyst with Sandler O’Neill + Partners. “Schools had to replace meals like Salisbury steak and turkey tetrazzini with organic vegetables and free-range chicken, and they know they won’t win the hearts of students unless they upgrade their housing,” Goldfarb says.

In spite of the thousands of new living spaces built for students in the past decade, Bayless notes that only 20 percent of antiquated student housing has been replaced.

Modernizing student housing has mostly taken the form of new development, although some markets have buildings that can be renovated to meet student needs.

Bayless points out that students appreciate living in an impeccably maintained class-A community and they respond positively to management’s organized alcohol-free events and zero-tolerance policies for property damage.

“We took over an apartment at Arizona State University in Tempe that had a party reputation and told the residents that we were developing an academically oriented community with no tolerance for rowdy behavior,” Bayless relates. “The building had a 70 percent occupancy rate before we took it over. Most of the previous residents left, and yet we quickly reached 100 percent occupancy.”

Although operating within the same narrow vertical, the stock exchange-listed student housing REITs have each carved out targeted niches. Churchey says EdR invests only at schools with at least 10,000 full-time students.

Campus Crest invests primarily in properties within walking distance of what Rollins terms “primary non-flagship” schools, such as the University of North Carolina campuses in Asheville, Wilmington and Greensboro rather than in Chapel Hill.

ACC invests in student housing within walking distance of large, four-year public universities because demand for those institutions is strong, according to Bayless. In recent years ACC has pioneered on-campus housing development in joint ventures with universities. State budget cuts for public universities have limited schools’ ability to develop or renovate their housing and that’s also not their area of core competency, says Meliker.

“Public companies are a good fit because they fulfill the schools’ need for transparency,” Goldfarb comments. “The schools can shift their capital to professors and programs, and the REITs benefit because on-campus housing is typically 100 percent occupied.”

While some investors have expressed concern that rising tuition costs and the availability of online education could slow demand for new student housing, developers maintain that those issues are not having an impact.

“Online education mostly appeals to non-traditional students or as a supplement for full-time students, and it’s not causing a broad displacement of on-campus students,” Rollins says.

Churchey says parents, who foot the bill for many students, are interested in secure, well-maintained, academically oriented housing and they are not particularly price sensitive.

“When parents are paying a total cost of $22,000 a year for tuition and housing, they don’t often complain about paying $1,000 more per semester to have their students live in new housing,” he says.

REITs that operate in property sectors with long-term leases might be dismayed at the prospect of an 80 percent or higher tenant turnover every year, but student housing managers know how to handle the churn of residents.

“There’s no question that this is an operationally intense business with yearly turnover that follows the academic calendar, but, on the other hand, we have 12 months of stability once a building is leased-up, rather than seeing monthly churn,” Bayless says. “Our average occupancy rates are 97 percent.”

Hands-on management is an important element of student housing, requiring not only routine maintenance of the buildings, but also room-by-room inspections and organizing social activities for residents.

In 2013 some investors were concerned that there would be an oversupply of student housing, but Bayless says the industry is still in the infancy of modernization, with new housing available to just 20 percent of enrolled students in most locations. Even in Austin, Texas, which has abundant new student housing, occupancy rates are well above 90 percent and there are enough beds in new housing for only about 40 percent of enrolled students, he says.

“One exception is that there was some overdevelopment of housing at the highest price point,” Bayless says. “We’re focused on building in the best location with the best amenities within a broad range of rental rates. For instance, we have rates ranging from a shared room at $499 to a private, one-bedroom penthouse unit at $1,200 in the same building.”

Goldfarb says supply concerns are “like playing whack-a-mole” since different markets occasionally appear to be overbuilt.

“Markets usually adjust to any overdevelopment within a year or two because developers figure out pretty fast when one area is getting oversaturated and they move on to other areas,” he says.

Meliker says student housing is an attractive recession-resistant investment that outperforms in a bad economy when more people opt to go to school or stay in school longer.

Goldfarb anticipates that the rebound in the sector that began early in 2014 will continue.

“These REITs have gotten back into their stride after 2013,” he says. “It’s a growth industry because of the need to replace aging facilities, the capital constraints on universities and the fact that students want amenities.”