The Philadelphia Naval Shipyard served as a hub of activity for the U.S. Navy for more than a century. During World War II, the facility employed approximately 40,000 workers engaged in building and repairing battleships for the U.S. fleet.

Over time, however, the Navy’s need for the shipyard dwindled to the point that it effectively discontinued operations there in the late 1990s. The city of Philadelphia took ownership of the site in 2000 and set out to re-make it into a mixed-use economic epicenter for the surrounding area.

Liberty Property Trust (NYSE: LPT) has spent the last 11 years working with the city to make that vision a reality. Thousands of employees currently report to work daily in the offices housed in the development, now known simply as the Navy Yard.

Liberty is one of a number of REITs engaged in redevelopment projects to transform outmoded assets into viable business and residential space. Along with Liberty’s project at the Navy Yard, here are a few examples of their handiwork.

“This is a very rare 12-acre infill site, which when completed will fit into the existing neighborhood seamlessly,” says John Eudy, Essex Property Trust’s co-chief investment officer and executive vice president of the development. The new building will include 35,000 square feet of retail and office mixed-use space.

When completed, the development will include 599 apartment units (mapped for condominiums) in four phases of approximately 150 units per phase. Units will range in size from a junior one bedroom to three bedrooms. Amenities will include a one-acre park at the center and several smaller parks throughout the property. A resident-only pool, fitness center and clubrooms will also be included.

In addition, the community will have 25,000 square feet of retail on the corner of Delaware and Concar Avenues. A key selling point for Station Park Green, which is situated between San Francisco and Silicon Valley, is its proximity to public transportation options, including the Caltrain rail line.

With demolition of the Kmart that was on the site now complete, building is expected to begin in the first quarter of 2016. 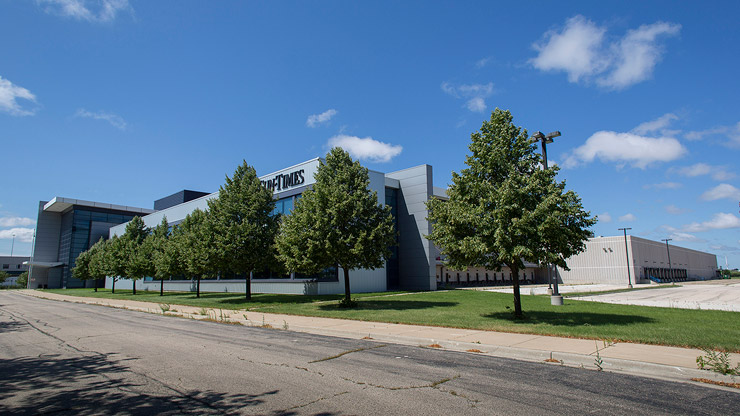 “We are transforming the legacy newspaper building from a legacy means of communication to a future means of mass communication,” says Brian E. Johnston, CTO of QTS. “The Sun-Times building was once a critical force in the local and regional economy, and with our redevelopment, the structure will again play a major role.”

Johnston describes the facility as “underutilized,” and he says the surrounding infrastructure will enable QTS to engage in the redevelopment at “below-market costs.”

Development plans for the site include approximately 215,000 square feet of raised floor capacity and 37 MW of power. Additionally, further expansion can take place on the property’s 30 acres.

“We are a big believer in recycling and reuse,” Johnston says. “Also, this is a great area of downtown Chicago. We hope to have a positive effect on the surrounding area by taking a vacant building and transforming it into an industry-leading mega data center.”

While QTS has seen significant data center development in the outskirts of Chicago, virtually nothing has come online in the city’s downtown area.

“We will help meet the healthy demand for data center services as well as bring jobs to the downtown corridor,” Johnston says. “Access to Chicago’s diverse talent pool played a role in our decision to add a location in the city. This new data center downtown comes where there has been little capacity or competition for years.”

The project is under active development and is expected to open in the third quarter of 2016.

The diversity of the businesses in Chicago makes it an appealing new market for QTS, according to Johnston.

The city of Philadelphia focused on utilizing the industrial side of its historic Navy Yard when it took ownership of the property in 2000.

Liberty and its joint venture partners won the rights in 2002 to develop 70 acres at the front of the Navy Yard into a campus-style office park. However, that was just the beginning for Liberty and the city.

“We finalized our agreement with the city’s economic development agency in 2003, and part of that was to come up with a joint master plan for the entire 1,000 acres,” says Brian Cohen, vice president and city manager of Liberty’s Philadelphia office. “We commenced construction on our first project in 2004, and this was the start of what’s been 11 years of successful development.”

As of today, the Navy Yard has approximately 12,000 employees working on-site. The facility is estimated to have generated $77 million in local and state taxes in 2012, when its managers conducted their last economic study.

“We, with our joint venture partners, have developed 12 buildings, one of which was a built-to-suit for sale, totaling approximately 1.3 million square feet,” Cohen says. “In addition to that, there are several other buildings that are either owner-occupied or occupied by the Navy.”

This summer, Liberty broke ground on its 14th new office building at the site, designed by the same architect behind Two World Trade Center. Cohen says Liberty expects to start three more offices this year. In addition to the buildings, a large part of Liberty’s plan concerns using notable landscape architects to design unique parks and public spaces. Along those lines, Liberty recently completed a 4.5-acre park called The Central Green, which was built to target millennials.

“It’s an active park that becomes another place for people to work—whether it’s working in a hammock or bringing the meeting outside,” he says. “Those types of spaces have created a unique place.”

“Our vision is to really build upon Liberty’s history and experience in doing both suburban campuses as well as urban development and to try and come up with an urban/suburban campus that could be an alternative to companies in the suburbs who were not interested in a downtown setting, but interested in what the city had to offer, including a growing labor force,” Cohen says. “Our high-quality design and architecture is what separates these buildings in the region.”

Looking ahead, there is no end date in site for the Navy Yard project, as things will be updated, redeveloped and improved over the years.

“In order for a campus development like this to be successful, the master plan needs to be flexible, and it never ends,” Cohen says. “It’s a dynamic plan that we continue to think about in terms of development over time.” 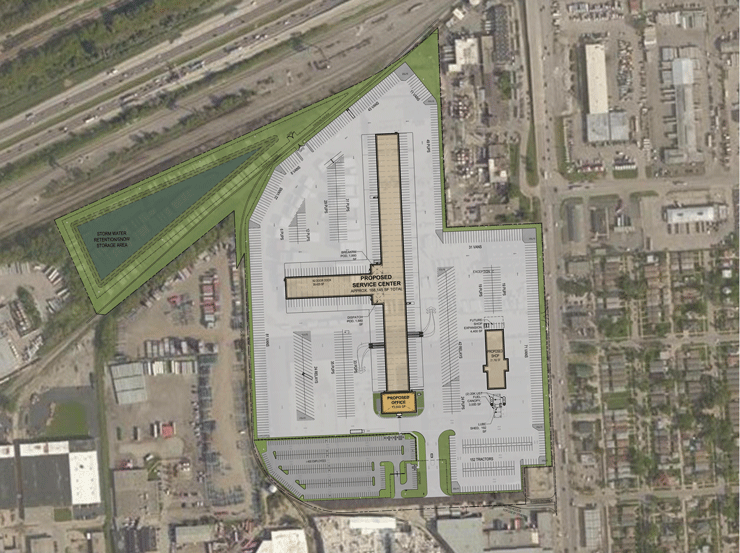 Like QTS, DCT Industrial (NYSE: DCT) has a major redevelopment project in the Chicago area. The industrial REIT is building a new 172,000-square-foot, 235-door truck terminal

at 4800 South Central Ave. It’s a build-to-suit project for an undisclosed Fortune 100 company, which has signed a 15-year lease.

The site currently houses three older buildings, which are set to be demolished. Actual work is expected to start in late 2015 or early 2016.

Jess Knigge, DCT Industrial’s regional vice president for development, notes that the finished project will consist of 53.6 acres. It will feature a 13,500-square-foot office building, a 21,000-square-foot maintenance shop and a fueling station on-site.

“From our standpoint as the developer, the excitement is about creativity,” Knigge says. “We are able to go in here, put together several parcels on a leaseback basis and our team was able to find a great long-term tenant.”

The neighborhood is historically an industrial corridor, and many of its facilities are similar. None is as large or as modern as what DCT Industrial is planning to build, which Doyle says is a bellwether of things to come.

Doyle adds that its location makes it ideal for those coming in. The site sits approximately a quarter mile from an entrance to I-55, which Doyle says is the highest-traveled truck route in Chicago.

Keith Loria is a regular contributor to REIT magazine.