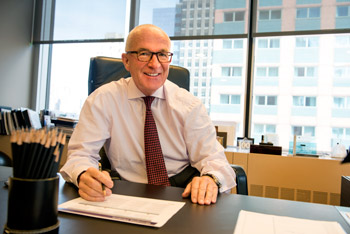 Paramount Group, Inc. (NYSE: PGRE) made headlines in November 2014 when it raised $2.6 billion in the largest-ever initial public offering (IPO) by a U.S. REIT.

The company had considered a private sale, but opted instead to take the public route. “Pursuing an IPO was the most favorable option given the quality of our portfolio, the growth profile of our assets in coming years and the track record of our management team,” says Albert Behler, Paramount’s chairman, president and CEO.

Since the IPO, Paramount has continued to pursue a strategy in place now for more than 20 years: owning premier office assets in New York, San Francisco and Washington, D.C., and taking advantage of the inherent opportunities to create net operating income (NOI) growth.

“Our story is pretty straightforward. We’re very focused on three markets, and most investors get that very quickly,” Behler says.

Analysts say Paramount, whose predecessor was a former manager of real estate investment funds, has made a smooth transition into the public sphere.

“They’ve brought in a CFO with significant experience and credibility with public investors,” he says. “That’s a major step for them.”

Seeing Value That Others May Miss

Formed in 1978, Paramount’s predecessor began life as an investment vehicle for the Otto family of Germany. Until Behler joined the company in 1991, it had owned properties in various asset classes around the country. Behler set to work on refining the company’s investment strategy to focus solely on class-A office buildings in gateway markets. Today, about 75 percent of Paramount’s NOI is generated in New York.

Paramount’s well-defined strategy has enabled it to see value in assets that others that are not so focused may miss, Behler asserts. A perfect example of this, he says, is Paramount’s 2007 purchase of 31 West 52nd Street in midtown Manhattan. Behler recalls that many other investors viewed the building as too safe—it was 100 percent occupied with long-term leases—and saw no opportunity to add value. Furthermore, the purchase price was considered by some to be too expensive, Behler adds.

Yet, Paramount moved ahead.

“Assets of this quality don’t come to market often, so if they do, we have to take advantage,” he says. Adding to the appeal of the transaction for Paramount was the fact that the building was acquired below replacement cost, and many of the existing long-term leases were significantly below market rates.

Behler says Paramount has worked with 31 West 52nd Street tenants on multiple occasions to offload surplus space, enabling it to re-lease at higher rates. The company has also reconfigured underutilized space in the lobby, allowing a sushi restaurant to open on the ground floor.

“These are the types of ways we proactively manage our properties,” Behler remarks.

Paramount currently owns 10.4 million square feet of assets across its portfolio. During the second quarter, portfolio-wide leased percentage increased to 94.8 percent, up 90 basis points from the end of 2014. Even in Washington, D.C., where the office market has been challenged by shrinking law firms and government sequestration, the portfolio is more than 90 percent leased. This marks almost a 10 percentage point improvement since the IPO, according to Paramount, and compares with a local market average leased rate of 83 percent. 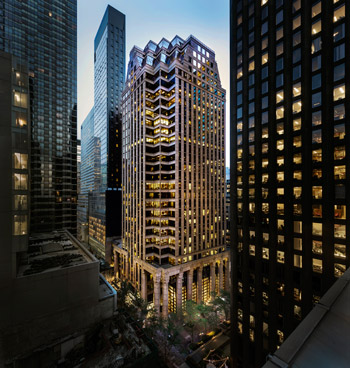 Behler notes that the company is on track to reach its goal of leasing 1 million square feet this year. Demand remains strong and availability of class-A office space is limited, Behler notes, providing a favorable dynamic as leases expire.

“With our current momentum, the company has a strong foundation to generate significant same-store NOI growth over the long term,” Behler says.

Edelson explains that the vacancy rate in midtown Manhattan is currently at 11 percent. Should it fall below 10 percent, the current rental growth rate of 5 percent to 7 percent could suddenly push into double digits. That could turn some of the upcoming tenant departures at Paramount’s higher-profile buildings into “a blessing,” according to Edelson.

In addition to tapping opportunities within its existing portfolio to facilitate NOI growth, Paramount continuously evaluates ways to strategically increase its presence in its three core markets.

With a total of 12 assets in the REIT’s portfolio, Edelson anticipates that Paramount could double the number of buildings within the next five to 10 years. Behler emphasizes, however, that the level of competition remains high.

“There’s a lot of liquidity in the market. You have all the REIT players, who are quite active, but also other foreign investors and institutional and local investors, who are very competitive as well,” Behler says.

Paramount has joined forces with some of that foreign competition in the form of joint ventures. Behler explains that many foreign investors cannot acquire more than 50 percent of properties and need the operational expertise that Paramount offers. In turn, Paramount benefits from increased property management and other fees generated in the process, according to Behler.

In September, Paramount announced an agreement to acquire the remaining 35.8 percent ownership interest that it did not previously own in 31 West 52nd Street from its joint venture partner for approximately $230 million.

While Paramount is seeing increased activity across its tenant base, a particularly active component is the technology, advertising, media and information (TAMI) sector.

“While we don’t expect all of our growth to come solely from TAMI tenants, we are certainly well-positioned to take advantage of TAMI demand,” Behler observes. As TAMI tenants grow and mature, they are not only looking for top-notch locations and amenities, he says, but also the infrastructure necessary to support their operations.

With its large floor plates that accommodate efficient, open layouts, Paramount’s 1633 Broadway location in New York is a prime example of what TAMI tenants are looking for, Behler says. Warner Music leases nearly 300,000 square feet in the building and has opted for a modern, open layout style “in a way you might not expect to see in a large class-A office building,” Behler notes.

On the other side of the country, Paramount’s biggest tenant at One Market Plaza in San Francisco is Google Inc. The tech giant recently leased an additional 22,000 square feet to reach a total of 286,000 square feet, or approximately 18 percent of the entire building.

TAMI customers account for about 13.4 percent of Paramount’s tenant base. The bulk of Paramount’s portfolio is focused on the financial services and legal sectors. Reagan says this has raised some concerns about retrenchment of office space, but adds that those fears may be overblown.

“In a healthy and improving midtown (Manhattan) office market, they should be well positioned to fill empty space and grow their NOI,” he says. 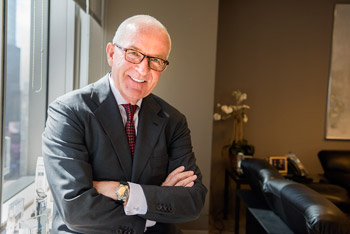 While Paramount remains positive on all three of its markets, its balance sheet is conservatively leveraged with a total debt-to-assets ratio of 40 percent to ensure significant financial flexibility in good times and bad. “Our financing track record and depth of relationships provide us with a strong path to be successful in this aspect of our business,” Behler says.

The company’s next upcoming maturity in December 2016 is a $926 million mortgage loan on 1633 Broadway, with a weighted average interest rate of 5.39 percent. Behler says the company is exploring options to refinance the debt early. Edelson notes that such a move would increase Paramount’s chances of receiving an investment-grade credit rating.

“Paramount is one of the best embedded growth stories among office REITs and has a strong management team and conservative balance sheet, which we believe demands a premium valuation,” Edelson observes.