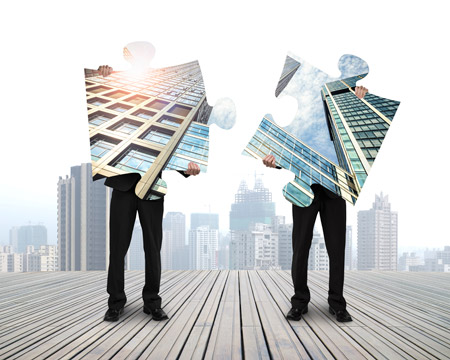 With their stock prices lagging behind net asset values, REITs have ramped up use of joint ventures to raise capital.

The appeal of JVs has ebbed and flowed with the markets over the years. Despite their main shortcomings—diminished control and more complicated accounting—JVs for most REITs currently represent a cheaper alternative to raising equity. The partnerships also help real estate owners diversify.

To help fund redevelopment or pay down debt, JVs serve as another useful fundraising tool. “It’s another avenue by which REITs can raise capital,” says Owen Thomas, chief executive officer of Boston Properties. “We can borrow secured and unsecured, issue equity, do JVs and sell assets.”

For institutional investors, such as life insurance companies, pension funds and endowments, hard assets in REIT portfolios come with caché. These assets tend to pay a good current yield and serve as a potential hedge against any future inflation.

in JVs, agreed to sell a 45 percent stake on three properties for $1.5 billion in cash.

“On the institutional side, there is a huge appetite for commercial real estate today,” says David Henry, chief executive officer of Kimco Realty Corp. (NYSE: KIM). “One way to grow REIT earnings is to in effect act as a money manager and use other people’s capital.”

One factor driving the increase in JVs is the value of REIT stocks. By and large, market watchers agree that REITs are trading at a discount to the net asset value of their properties. That makes issuing equity an undesirable way to raise capital to fuel growth. Raising more debt means increasing leverage ratios, and investors typically discourage use of too much debt.

“People don’t love their stock price as much as maybe they did in other times in the last 12 months,” says Mark Decker Jr., managing director at BMO Capital Markets and head of the firm’s U.S. real estate, lodging and leisure group. “That may drive some behavior.”

Over a 12-month period ended Sept. 30, commercial property prices for institutional-quality real estate rose 10 percent, according to research firm Green Street Advisors. Yet, stocks prices in the FTSE/NAREIT Equity REITs Index trailed on average with a 6 percent rise during that time. By early October, Green Street estimated stock prices traded at an 8 percent discount to NAV.

“Having a broad menu of capital sources is always a good idea, but especially at times when the public market trades at discounts to NAV persistently,” says Michael Knott, a managing director for Green Street Advisors.

In fact, while joint ventures come with a downside in terms of bookkeeping and loss of total ownership, the discount in REIT stock prices to property values makes partnering more palatable.

“The balance has shifted,” says Schecky Schechner, a managing director at Barclays. “Today, where REITs are trading below NAV, it becomes more of a calculus of having lower cost of capital than issuing stock, balanced against the pain of more complicated accounting and loss of 100 percent control.”

REITs use JVs in a variety of ways. Under one arrangement, the REIT serves as the operating partner, typically bringing in an institutional investor as a partner. Another is when the REIT teams up with an operating partner in need of capital to get a project developed. JVs also serve as a key way to work with local players overseas.

“The JV is highly situation specific,” Decker says. “The bias is toward owning things on your own balance sheet, but there are times where JVs are strategic to the business.”

For many REITs, JVs with institutional partners have special appeal these days, given the higher NAVs relative to REIT stock prices. “You are going to see more management teams really looking to see if they can sell part of the right kind of asset at the right price,” says Jackson Hsieh, vice chairman and head of real estate banking at Morgan Stanley. “It gives the REIT diversification and avoids overconcentration.”

The largest deals these days are being fueled by the biggest institutional investors. The large investors will choose to go directly with a REIT partner, Hsieh adds.

“JVs are going to increase in velocity and volume,” he says. “Investor preference is going to be what drives it the most, with a desire to be closer to the asset as opposed to going through a fund.”

The larger JVs tend to be done by more sophisticated pension funds or sovereign wealth funds, Hsieh notes. Endowments and smaller corporate pension funds tend to join up with private equity players such as Clarion Partners, Blackstone and JP Morgan Asset Management. These PE shops pair up with REITs. Eventually, the funds cash out. Kimco, for example, purchased Blackstone’s interest in its 39-property Kimstone portfolio from Blackstone earlier this year.

Large institutions have the benefit of working with the highest quality real estate with established REITs. In the GGP deal with SuperAustralian, the REIT will generate net proceeds of $907 million on the 660,000-square-foot mall. The proceeds will be used to pay down debt and will also fund future acquisitions, the company said.

In another deal, Alexandria Real Estate Equities (NYSE: ARE) sold off a 70 percent stake in 225 Binney Street in Cambridge, Mass., to TIAA-CREF in July for $190 million. Alexandria has noted that the deal allows it to monetize a core asset and reinvest the capital in its development pipeline.

While Boston Properties has sold off assets entirely, holding onto an interest helps it retain some solid cash flows on highly desirable properties.

“It allows us to keep the upside from half of the property,” says Thomas, the Boston Properties CEO. “It also keeps our market presence—all of the relationships we have in owning these buildings, along with the leasing and the management.”

The market for finding JV partners is pretty inviting for REITs, according to Thomas.

“It’s very strong,” he says. “There are significant pools of capital both domestic and offshore interested in owning high-quality real estate in this country.”

The JVs allow REITs like Boston Properties to reinvest the capital into a development pipeline representing $2.4 billion, of which $1.1 billion had been invested by the end of the second quarter, according to an SEC filing.

“For raising equity to fund developments, we think selling whole or JV interests in assets is a more cost-effective way than issuing equity in the current market environment,” Thomas says.

Properties to get a capitalization rate of around 4 percent on a sale, and then turn around and generate yields from developments of around 6 percent for residential properties and 7 percent for office ones, Thomas notes. “There is a bit of a time delay because it takes us a while to complete and lease the developments, but generally we are trading into higher yields and newer property, so it’s a very favorable outcome for shareholders,” he says.

Some Paring, But With Open Eyes

Some REITs have embarked on simplifying their JV assets. Kimco has pared down its JV portfolio in recent years, selling about 30 percent of it over a 15-month period ended Dec. 31 and buying about $1 billion worth of JV properties in 2014 alone. In part the winnowing is an to answer Wall Street’s call for fewer JVs in its portfolio, Henry says. The acquisitions are helping Kimco simplify its portfolio, and there are advantages to going it alone, according to Henry.

“When you start buying out partners, you generally get a better deal,” he says. “There is no broker, no assumption fees and no transfer costs. We know the assets well and we have an inside track on pricing.”

That means low due diligence costs and a quicker time to close. It also costs less to assume mortgage debt on the properties.

But buying out partners doesn’t mean Kimco will shy away from deals when it comes to pension and sovereign wealth funds. “We have always looked at JV institutional money as a source of capital,” Henry says.

In fact, the shopping center REIT is teaming up with CPP for future development of a retail center on land parcels in Dania, Fla. It’s also looking to develop a 750-apartment complex with CPP at Pentagon Plaza in Washington, D.C.

“To be competitive in buying properties today, you almost need to team up with a pension fund or a life insurance company to buy assets today because your cost of equity capital is so expensive,” Henry says.

But, by and large these days, the positives outweigh the negatives. “A JV is a perfect solution,” Hsieh says. “You get rid of some of the exposure, but you don’t lose all of the operating income, and you can potentially buy it back later.”

When it comes to REITs striking JV deals, things could be just getting started.

“If REITs continue to trade at significant discounts to NAV, management teams are going to run out of noncore assets to sell, and they will not be able to generate enough free cash flow to do what they want to do,”

Schechner says. “If this is the case and REITs want to buy more assets, JVs are going to become more prevalent.”

Charles Keenan is a freelance writer and longtime contributor to REIT magazine.