Economists Give Their REIT Predictions 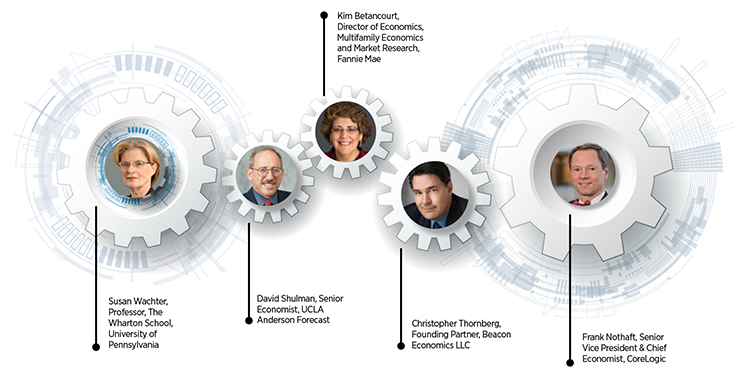 Equity REITs recently came into their own as virtually the only companies in a standalone real estate sector in the closely watched Global Industry Classification Standard (GICS®), the leading classification system for stock exchange-listed equities worldwide.

The move has drawn fresh attention to the space. Industry watchers expect property values to continue rising, fueling strong quarterly results that reward investors with increased share prices and healthy dividends.  furthermore, investment from across the globe should continue. To be sure, it remains to be seen how long such robust growth can be sustained, and some observers question whether some types of real estate have peaked.

Regardless, two things remain certain. First, technology will continue reshaping the space. “The speed at which technology alters our behavior will continue at an accelerating pace, which impacts essentially all commercial sectors,” says Jeffrey Horowitz, the global head of real estate, gaming and lodging investment banking at Bank of America Merrill Lynch. Second, real estate developers and investors will continue catering to millennials. This group is having a dramatic impact on REITs ranging from apartment companies, which are designing units to meet their needs, to new growth in REITs catering to the explosion of e-commerce.

Nareit spoke with five economists to get their thoughts on what to expect in real estate next year and in the near future.

REIT: What do you predict will be the biggest trends in commercial real estate next year?

DAVID SHULMAN: The biggest trend for commercial real estate in 2017—and beyond—is the ongoing technological disruption of the industry. E-commerce is taking roughly 50 percent of the growth in overall retail sales, [except for] auto, gas, food and restaurants, which is eroding the underlying value of retail real estate.

On the office side, square footage per employee continues to come down, creating latent vacancies in its wake, and hoteliers have to deal with the fact that Airbnb is here to stay.

KIM BETANCOURT: We believe that multifamily will continue to be a favored asset class for commercial real estate investors. A combination of low interest rates, a healthy spread between cap rates and U.S. Treasury rates, continued job growth, and demand for multifamily rentals from millennials, coupled with low homeownership rates, present a positive scenario for multifamily fundamentals over the next 12 months.

CHRISTOPHER THORNBERG: The biggest trend this year is the continuing of the current trends: The fact that cap rates are still low; there’s tons of demand. You have new stuff coming online in some of these hot
markets, and guess what? It’s coming online when there’s demand.

The biggest trend for commercial real estate in 2017, and beyond, is the ongoing technological disruption of the industry.
– David Shulman, UCLA Anderson Forecast

REIT: Has the market peaked?

THORNBERG: There are a lot of folks in the market who think the market has reached a peak. I candidly don’t see any reason to believe that.

REIT: Talk to me about the current economic cycle.

SUSAN WACHTER: Growth slowed for the first half of 2016, but picked up again. If confirmed, a rate rise is likely. But against the bearish implications of higher rates, real estate remains the great diversifier, and U.S.
real estate is the great risk hedge against global turmoil.

FRANK NOTHAFT: The expansion entered its eighth year during the summer, and to date is the fourth longest in U.S. economic history. Employment has increased each month since September 2010, the longest consecutive monthly gain recorded in the U.S., with a cumulative gain of more than 14 million jobs since then. Ten-year Treasury yields remain close to record lows.

(At press time), expectations are for the economy to grow about 2 percent in 2017 with interest rates remaining at historically low levels, albeit slightly higher than in 2016. These economic conditions are conducive to supporting office employment, consumer spending and household formation, which should strengthen demand for both the apartment and the non-residential sectors.

SHULMAN: It is hard to tell where we are in the current economic cycle because monetary policy has been unprecedented. Simply put, on the capital side of the equation, monetary policy has broken our clocks. Should policy normalize too quickly, we will find, in Warren Buffett’s terms, more than a fewer swimmers playing in the surf without any swimsuits on.

BETANCOURT: It really depends on the metro area. Some metros are still in an expansion phase, but others are already heading downward. Some energy-reliant metros are already in a recessionary phase–such as Midland- Odessa, Texas, and Cheyenne, Wyoming.

Others at risk for a downturn are weathering the lower oil prices, such as Houston and even New Orleans, which many people think of as merely a tourist destination. A number of the high-tech metros–San Francisco, San Jose, and Seattle–still see above-average job growth, as are metros that boast lower-than-average business costs, such as Phoenix, Orlando and Jacksonville.

REIT: What are your thoughts on the current residential market? How could current conditions affect—good or bad—the commercial space?

WACHTER: Urban, broadly defined as center cities and dense suburbs, is back. This is a trend for the long run. Multifamily will densify across growing metros, in cities and existing suburbs. There will be new commercial demand as well responding to center city job growth, which in turn will spark residential demand in a virtuous cycle. These reinforcing trends will literally bring cities and their surrounding suburbs to new
heights.

NOTHAFT: In the residential space, demographics, foreclosure trauma and loan underwriting changes have led more young households to shun ownership for rental. Apartment demand has remained strong and will likely remain so this year.

REIT: How do you see foreign investors reshaping the commercial landscape this year and in the next few years?

WACHTER: The U.S. is and will be a hedge for global risk, and REITs provide buyers equity stakes which hedge global risk and position buyers to take advantage of long-term potential upside in the U.S.

BETANCOURT: Brexit, combined with low interest rates, might lead to more European investment in the U.S. property markets, creating a scenario of a “safe harbor” that might entice investors–and lenders–to the U.S. This, in turn, could benefit major gateway metros such as New York City and San Francisco, as well as other primary metros, such as Boston; Washington, D.C.; Dallas; Orlando; and Tampa.

THORNBERG: People see the U.S. as a good place to be investing. It’s a beacon of stability in a shaky globe. I think a lot of money is going to continue to flow here. You’re going to see more investors coming from different parts of the world putting cash here as a safe haven.

REIT: There’s been a lot of talk about how millennials are shaping development: More companies are moving to urban areas, and apartment development remains busy. How do you see this large group affecting the space and the economy?

WACHTER: The millennials are as consequential for new and lasting market trends as baby boomers were in their day. Their urban lifestyle choice is driving the rise of the center, both center city and newly densifying suburbs… Millennials aspire to be homeowners just as much as their older siblings and parents, but they just cannot get the credit. And down payments keep going up with prices, and higher rents
make saving harder. 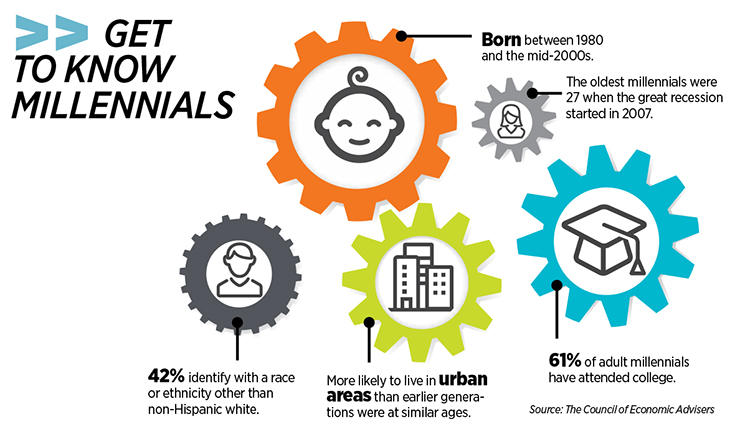 BETANCOURT: Looking long term, what about the next wave of future renters? The post-millennials–or “Generation Z”–are getting ready to form their own households over the coming decade but it is not clear what their housing needs will be. Most likely, they won’t be very different from today’s millennials, at least when it comes to multifamily demand.

Today, there are more than an estimated 65 million people under the age of 16. Over the next decade, the oldest of this cohort will start forming households. About 70 million people will be between the ages of 20 and 34 by 2024. That’s in just eight years. And if they are anything like previous generations, a sizable percentage of them will become renters of multifamily housing. Despite all the new multifamily construction going on today, there might actually not be enough of the right rental housing, in the right locations, to meet the demands of this uniquely techsavvy and multi-tasking generation.

SHULMAN: To be sure, millennials are clustering more in urban centers, but we are beginning to notice that the market for, say, $3,500 a month, one-bedroom apartments is kind of thin. The development pro formas
for upscale apartments scheduled for delivery in 2017 and 2018 are going to be hard to meet. The wildcard here is whether the long delay in marriage and child rearing for millennials is about to end. I don’t have an answer to that question but, if you want to be contrarian, we might soon see single-family construction taking share away from multifamily.

REIT: How will the rise of e-commerce continue affecting the commercial sector?

WACHTER: Already has. Retail must now be convenient (against the immensely convenient delivery economy) or be a destination to thrive or even survive.

NOTHAFT: Millennials love to be on their devices. Multifamily property managers that can cater to this need by providing access to information and easy-to-submit tenant applications and repair requests will be especially successful.