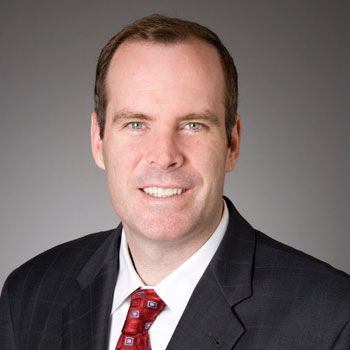 REIT: The U.S. economy has had a few stumbles so far in 2016. What is your outlook going forward? What downside risks are you worried about? What areas might have upside surprises?

MICHAEL GAPEN: The question this year has been whether the weaknesses in certain sectors could roll the broader economy into recession. It looks like the worst of the risks are behind us and the outlook has brightened somewhat. Recent strength in the labor markets gives us more confidence about growth rates around 2.5 percent in the second half of this year, slowing to 2 percent in 2017, that is, basically the same type of economic growth as
the past six years. Growth is slower but is durable, and is not that fragile.

There’s more tortoise than hare in this economy. It’s not exciting but you’ll look back eventually and see how much ground the tortoise has covered.

REIT: The unemployment rate has moved lower and lower. Do you think businesses will find the workers they need?

GAPEN: The economy is at full employment. There are two views, one is that employment growth has to slow at this stage of the cycle as you are running out of workers. This is great in theory but in practice it has never really
happened that way. Firms continue to hire as in the recent past until wages go up, then at some point the Fed starts tightening. We are at the point where further hiring will put upward pressure on wages. This is a good thing for the economy, as it needs some domestic price pressures to get back to the Fed’s 2 percent inflation target.

We expect the unemployment rate to fall to 4 percent or below. There may be some undershooting in this unemployment
rate outlook, which will support the recovery in wages. We don’t view that as being alarming for the Fed.

There’s more tortoise than hare in this economy. It’s not exciting but you’ll look back eventually and see how much ground the tortoise has covered.
– Michael Gapen, Barclays

REIT: The housing market has an impact on other sectors throughout the economy. What’s your outlook on new construction and house prices, and home ownership versus renters?

GAPEN: Housing is normally procyclical, meaning it strengthens early in a recovery and often peaks before the economic cycle matures, but this time it is lagging the cycle. This means it has more room to run, and house price appreciation in the 4 percent to 5 percent range seems appropriate. We estimate the equilibrium long-run rate of housing starts to be approximately 1.4 million per year, and we are still below that, so there is room for modest
incremental improvement.

Labor markets have been strong enough to spur household formation, but people still need to decide whether to rent or to own. We think it’s still a renters’ market ahead. The shift away from ownership is real and will be durable, and the fundamentals that are supporting the formation of new households do not imply a rebound in the home ownership rate. We expect multifamily construction to be an important part of the story going
forward, with 30 percent or more of total housing starts.

REIT: What is your outlook on interest rates and the Fed?

GAPEN: We expect gradual rate increases, two rate hikes or so a year, ending at a rate target of 2 percent in 2018 or 2019. There has been an evolution over time in thinking about the potential growth rate of the economy, which has generally moved lower, and inflation is lower too. The outlook for monetary policy has softened as well. A neutral policy interest rate today would be close to 2 percent.

REIT: So you’re not concerned about the Fed falling behind the curve?

GAPEN: We give some credence to the risk that they may fall behind, but not a lot. There are global disinflationary pressures, so although it’s possible to get some overshoot on inflation trends, it’s more likely to get a gradual firming as the labor market tightens.

Risks of financial instability are paramount. The past two cycles created unsustainable moves in asset prices to support unrealistic targets for unemployment. The inflation was in asset markets not consumer prices. Several Fed officials have warned about commercial real estate prices overheating.

REIT: How are financing conditions in commercial real estate?

Our clients are telling us that credit is less available than in the past, both for commercial real estate and for general corporate loans. Retrenchment in the energy sector is part of the story, including lending for structures in those markets. Overall, in broader terms this is typical behavior in terms of tightening lending standards as the cycle matures.

Michael Gapen is a managing director and chief U.S. economist for Barclays. Gapen is responsible for the firm’s outlook for the U.S. economy and, in particular, U.S. monetary policy and the impact of financial markets on the economy. Gapen joined Barclays in 2010 from the board of governors of the Federal Reserve, where he was a section chief responsible for monetary and financial market analysis.