The REIT View on Volatility

A new sector for real estate sounds like a prescription for lower REIT volatility and better diversification from the broader market. 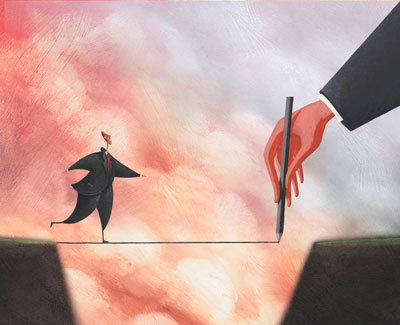 Volatilty is a touchy subject in the REIT world.

Many REIT industry veterans lament the investing marketplace’s historical tendency to conflate Equity REITs with notoriously erratic financial companies. Too often, they say, shocks to the financial system bleed over into the movement of REIT stock prices.

"The core sectors for REITs trade fairly predictably over time around the estimates of the value of the real estate they hold," says Michael Hudgins, managing director and global real estate strategist with EII Capital Management, Inc. Because they have been classified with financial stocks, though, "you’ll see these shares move while being driven by market events that have nothing to do with the real estate."

However, as of this year, changes to the taxonomy of industries have analysts and industry observers growing confident that REITs will trade more in line with the fundamentals of real estate. Even though short-term fluctuations are inevitable, they maintain that the end result in the long run will likely be less volatile stock pricing and enhanced diversification benefits for investment portfolios.

In the long run, the thinking goes, a REIT’s performance should mirror its underlying real estate assets.

"You have to think about these companies as very successful managers of real estate," Hudgins says. "As a result, the returns they generate over time will be correlated to that real estate."

That’s not always the case over short periods, though, especially if investors become worried about the financial sector. "The stock market is emotional in the short term," according to Glenn Mueller, a professor at the University of Denver and real estate investment strategist at Dividend Capital Group.

In 1999, REITs were lumped into the Financials Sector of the Global Industry Classification Standard (GICS®), which is the dominant rubric today for categorizing companies. Additionally, Standard & Poors began to include REITs in its S&P 500 and other indices in 2001. A prolonged period of declines that started in the early 1990s with the advent of the "Modern REIT Era" came to an end." Correlations between REIT returns and the broader market began to ascend. REIT volatility also shifted slightly upward.

In other words, simply by virtue of the company they kept, Equity REIT stocks became more volatile and more correlated to both financial companies and the broader market.

"You could almost argue that a third to half of the volatility seen in the REIT market is simply driven by market events that don’t matter and have no bearing on the true volatility of the real estate they own," Hudgins says.

You have to think about these companies as very successful managers of real estate. As a result, the returns they generate over time will be correlated to that real estate.” – Michael Hudgins, EII Capital Management, Inc.

Since 2012, REITs volatility and their correlations to the broader market have actually come down. Pawan Jain, a professor at the University of Wyoming who has studied trends in REIT returns, notes that REITs’ liquidity also went up after the financial crisis of the late 2000s.

"We link it to the fact that there could be a flight to quality," Jain says. "The market was so extreme back then that investors thought it might make more sense to move to a cash-flow structure that was less volatile, as was the case with REITs."

Changes to the GICS structure are driving speculation that those downward trends in volatility and correlations will accelerate.

The REIT industry underwent a tectonic shift in September with the creation of a new headline sector for real estate under GICS. Equity REITs, which had fallen by default into the GICS Financials category, moved to the new Real Estate Sector. They have been joined in their new home by a handful of real estate management and development companies.

Overall, Equity REITs account for more than 95 percent of the equity market capitalization of the new Real Estate Sector, a major change from their previous home in the Financials Sector.

"The most important consequence of introducing the new Real Estate Sector is to provide a much greater level of visibility for real estate in the economy," says Mike Grupe, NAREIT’s executive vice president for research and investor outreach. Real estate will become "a much more prominent part of the conversation" for investment decision makers as they design portfolio strategies and set asset allocations, he says.

One of the primary complaints from REIT-dedicated investors is that generalist investors don’t understand the differences between real estate companies and companies in the other sectors. REITs have their own metrics for performance, such as funds from operations and net asset value, that won’t be found in the quarterly report of a technology company or an auto manufacturer. It’s possible, if not likely, that the heightened visibility for real estate will motivate generalists to develop a more robust understanding of the business attributes and metrics of REITs.

Grupe counts himself among the market watchers who believe that separating real estate from the Financials Sector should mean that REIT stocks are more likely to trade based on underlying real estate fundamentals, as opposed to factors in the capital markets that tend to drive financial stocks.

"I think that will create a situation in which real estate companies will be free of those other factors," he says. "We’ll see that valuations of the stocks and their trading activity will reflect more directly the actual developments in the Real Estate Sector."

"About 50 percent of the Equity REIT index (by market cap) is in the S&P 500," he says. "Those names have always resided in the Financials Sector, which is the second-most volatile group. Just having REITs pulled out of that sector has got to be helpful."

He points out that the same goes for investors who value the diversification benefits of REITs.

"This is going to be good for the REIT market. On the margin, I think it’s positive for volatility and for correlations moving forward." 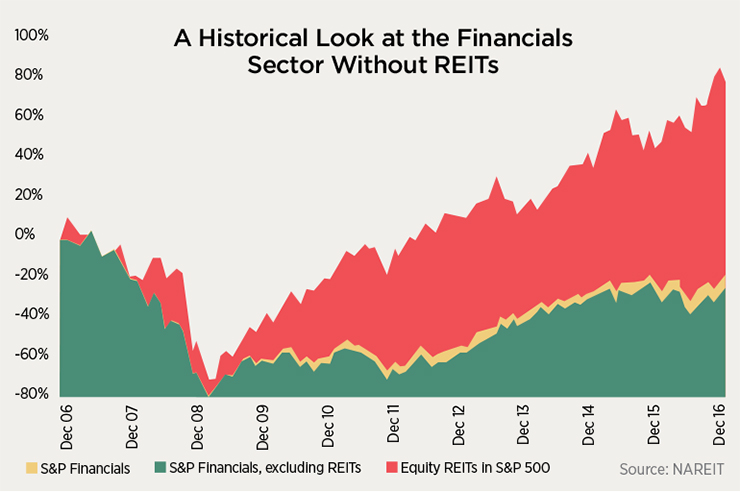 What Would Have the Financial Sector Looked Like Without REITs?

Equity REITs have been carrying the financial sector since the financial crisis of the past decade, according to an analysis of return data.

Brad Case, NAREIT’s senior vice president for research and industry information, pieced together the monthly total returns of the REIT and non-REIT constituents of the S&P 500 Financials Sector back to the beginning of 2007, just before the REIT downturn and liquidity crisis. "This isn’t a substitute for S&P’s daily indices," Case cautions, "but the results are pretty revealing."

The "great recession" hit the financial sector hard, and it hasn’t yet recovered: Total returns from the end of 2006 through the end of August 2016 averaged -2.05 percent per year.

"A lot of institutional investors have probably been allocating capital to the Financials Sector based on capital market assumptions— returns, volatilities and correlations—that they didn’t realize looked much better purely because of the REITs in that sector," Case says. "Financial companies seem to have been benefiting from a pretty substantial REIT diversification benefit, but now that free ride is over."