In May, office REIT Boston Properties, Inc. (NYSE: BXP) made a permanent contribution to the San Francisco skyline and helped invigorate a developing neighborhood with the grand opening of its Salesforce Tower.

The building boasts the highest vertical in the city and the tallest rooftop height west of Chicago. Standing at 1,070 feet with 61 floors, “Salesforce Tower has already become synonymous with San Francisco and its skyline,” two-term San Francisco Board of Supervisors member Jane Kim says.

The completion of the building marks a new direction for development in San Francisco and the realization of a key component in the San Francisco Transit Center District Plan and the Transbay Redevelopment Plan. These initiatives have centered on redeveloping the South of Market neighborhood to bring transportation, affordable housing, and the mixed-use benefits of a thriving 24-hour neighborhood.

Kim says the tower is an important contributor to these changes. “The construction of Salesforce Tower has really helped stimulate the economic growth of a new neighborhood that we are building here in San Francisco,” she adds.

The city’s original vision for the Transbay Plan focused on selling parcels of public, state-owned land to finance a new transit center for the entire city of San Francisco, connecting CalTrain, AC transit, Muni, and a future high-speed rail. Dubbed the “Grand Central of the West,” the Transbay Transit Center (now the Salesforce Transit Center) would replace the existing Transbay Terminal built in 1939.

At the time of the proposed sale, the Great Recession had weakened the market and discouraged developers from seizing the opportunity to build the tallest structure in the city. The city also had to combat its reputation for being a historically volatile market for development and new construction.

“It took a bit of ambition and confidence for any sponsor to take on this massive project for San Francisco,” Kim notes. “But we considered it an important anchor both for our skyline and also for the construction of the new neighborhood.”

In 2012, San Francisco found its buyer and partner in Boston Properties when it purchased a 95 percent stake in the site in partnership with global real estate investment company Hines.

“When we envisioned Salesforce Tower—our largest development—there were lots of questions about the scale of the investment, the size of the building, and the identity of an anchor tenant at its outset, but we had confidence that we could successfully develop Salesforce Tower,” says Owen Thomas, CEO of Boston Properties.

The REIT already had a strong working relationship with the city after purchasing the Embarcadero Center in 1998. Thomas credits the city’s foresight and Boston Properties Co-Founder and Chairman Emeritus Mortimer Zuckerman with having “the vision and willingness to take the risk.”

The company’s portfolio and access to long-term capital helped them take on that risk, without using a construction loan. “Having a significant portfolio, decades of experience in complex, marquee development, unsecured debt funding at the corporate level, a large balance sheet, and equity funding enabled us to capitalize this very large, complex, and long-term project,” Thomas says. “And being organized as a REIT helped us accomplish this successful development.”

A Revolution in Up-Zoning

“What was extraordinary about the Transit Center District Plan was that this plan had almost zero opposition and there was no appeal after its passage,” Kim explains.

She says constituents supported the need for density and infrastructure support in the downtown area, while a state law required that 35 percent of new housing units be set aside as affordable in order to address the housing crisis in the city.

The latter plan has also included the first 100 percent affordable housing project built in this district, as well as housing for middle class families of four that earn up to $120,000 a year. The area previously qualified as a Mello-Roos District, which allowed for financing of public improvements and services and the passage of the San Francisco Transit Center District Plan. 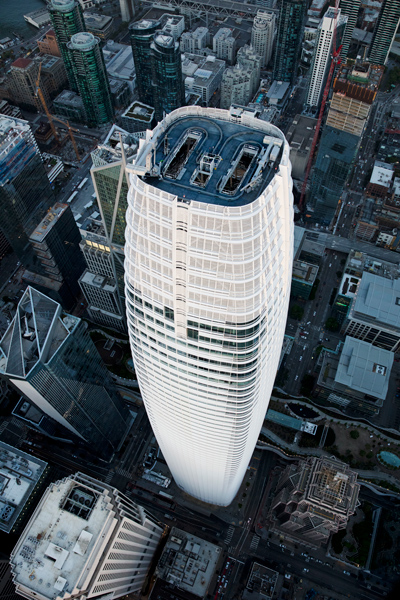 San Francisco’s position as a hub for technological advancement has only increased demand for housing and office space to accommodate more jobs.

The sale of the land for the tower had an immediate impact on economics, providing an influx of construction jobs. Thomas estimates roughly 800 construction workers were employed onsite each day and that about 8,000 permanent employees will work in the 1.4 million square feet of office space.

The city’s plan with Boston Properties to create a 24-hour, sustainable community and the tower’s proximity to the new Transbay Transit Center helped attract the tower’s key tenant—Salesforce. “Born and bred” in San Francisco in 1999, Salesforce’s innovative cloud software platform has made it a global leader in customer relations management.

“Boston Properties has been a fantastic partner in all of this,” says George Kreitem, senior vice president of real estate at Salesforce. “They have worked with us to allow us to create this vision of our growth in our headquarters campus in San Francisco.”He also credits thecity for being “very cooperative.”

Kreitem grew up in San Francisco and has witnessed the evolution of the area first hand. “It’s really exciting to see the transformation of these neighborhoods where they’re truly becoming 24-hour neighborhoods,” Kreitem says. “Salesforce wanted to be part of that transformation. It came at the right time for us, when we were growing at this fast pace.”

As part of its commitment to the community, Salesforce.org, the philanthropic division of Salesforce, announced in September that it would fund $18 million in grants toward Bay Area homelessness, education, and cleanliness. This marks more than $50 million the company has donated since 2013—and does not include the considerable donations of the company’s CEO Marc Benioff to Hamilton Families’ Heading Home Initiative to end long-term family homelessness in San Francisco.

For the build out of the Salesforce floors, instead of “corner offices” for upper-level management, the desirable corner views at Salesforce are reserved for employee socializing, where they can meet, eat, relax with television, and host town hall meetings, according to Kreitem.

Salesforce has also designated the breathtaking views and space on its top floor as the “Ohana Floor,” an open hospitality space available to employees. Starting in early 2019 on weeknights and weekends, when available, the Ohana Floor will be open to non-profits and foundations that align with the company’s values of giving back,at no charge.

Touted as “the world’s best living room,” the Ohana experience will be featured at all of Salesforce’s main tower locations around the world. Salesforce Tower also features state-of-the-art lobbies open to the public with weekly events. “Our front door is open to the community,” Kreitem says. 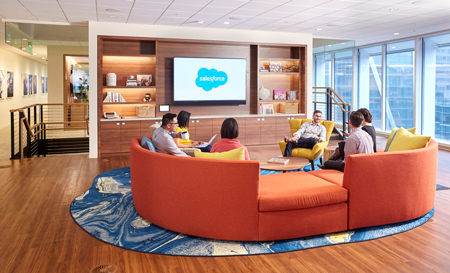 To fulfill the city’s public art requirement for the project, Boston Properties partnered with local artist Jim Campbell to create “Day for Night,” the highest art installation in the U.S. Visible for 20 miles, residents can view the innovative public art—video capturing images from cameras around the city—displayed with 11,000 LED lights at the top of the tower.

The city has already witnessed a boom in economic vitality and housing in the emerging neighborhood thanks to the tower.

“[South of Market] has become a mixed-use neighborhood with new offices, new residential buildings, including affordable housing and new parks,” says Kim, who credits the partnership with Boston Properties as part of this success. “It’s a company that always thinks about how they can be a good neighbor and how they can contribute to the fabric of the neighborhood and our communities.”

For its part, Boston Properties sees Salesforce Tower within its larger corporate strategy and focus on urban development in key cities across the U.S. “We want to develop and own the highest- quality properties. Ones that stay full in the downturns and are economically competitive, but don’t lead with price. We want to lead with quality, location, and amenities, and Salesforce Tower couldn’t fit those definitions better,” Thomas says.

Kreitem agrees. “It’s amazing for us being part of the neighborhood and giving our employees the ability to engage with the community,” he adds. “It is really a key part of our DNA and our culture and what we do when we look at real estate.”