Omega Healthcare is transforming itself ahead of a demand surge.

During its investor day earlier this year, Omega Healthcare Investors, Inc. (NYSE: OHI) was upfront that the next 12 to 24 months would be challenging. But, as the REIT pointed out: “Challenging is not the end of the world.”

Indeed, the triple net REIT focused primarily on skilled nursing facilities is optimistic about the future. Demographics are in its favor as the massive wave of aging baby boomers needs more advanced care; government reimbursement rates—a large part of Omega’s income—stabilize; tenant woes subside; and a luxury development on New York’s Upper East Side gets closer to completion.

“This is definitely an industry that goes through cycles,” says C. Taylor Pickett, who has served as the Hunt Valley, Maryland-based company’s CEO since 2001. “When the cycles are good, it’s a time we can really grow the business significantly compared to a lot of other REIT models.”

Analysts agree that while short-term challenges are real, they will start to ease. “The current environment for skilled nursing operators is difficult. Margins are low, exacerbated by slow government reimbursement growth, coupled with higher wage and expense inflation. This has put many operators in a precarious financial position,” says Chad Vanacore, an equity research analyst with Stifel Nicolaus. “However, the long-term outlook is bright. With a growing senior population as the baby boomer generation ages, demand for skilled nursing should grow and fundamentals should improve substantially for property owners.”

Lukas Hartwich, a senior analyst covering the company for Green Street Advisors, says Omega was well positioned to weather a down cycle and now seems to be on solid footing, with most of the issues “in the rearview mirror.”

Omega was formed in 1992 and gained significant market share when it merged with Aviv REIT Inc. in 2015, creating a $10 billion REIT predominantly focused on skilled nursing, with hundreds of properties across more than 40 states. Omega also owns 55 facilities in the United Kingdom

This tenant niche, which has government oversight and requires licensing, is important to the nation’s health care system. It provides “a low-cost solution for high-acuity medical care,” says Green Street in an industry research paper.

Omega’s real estate serves two patient populations, Pickett explains. First is long-term patients typically on Medicaid, which helps people with limited means access medical care. In this case, the residents have exhausted financial resources but have care needs that require constant attention until they transition to hospice care, he says. Other residents come after being discharged from the hospital and stay for a few weeks for rehab or other therapies. “You have two different clinical things happening under that roof,” he adds.

While it seems like the modern version of a nursing home, there’s more to it than that. “Think more along the lines of a senior citizen who has high acuity medical needs. They’re more medically dependent than just looking for somewhere to live,” Hartwich says.

The company currently owns roughly $10 billion of real estate and mortgages leased to a diverse base of more than 65 operators that includes Ciena, Communicare, and Genesis. It boasts a large presence in retiree-heavy Florida, which accounts for 10.5 percent of annualized rent/interest, followed by Texas, which makes up 9.3 percent, according to filings. It also has significant presences in Ohio, Michigan, Indiana, and Pennsylvania. This geographic diversity is helpful because many states set their own rules for medical programs for seniors. Another bright spot is that its current lease rates—including escalations—are locked in for some time: More than 90 percent of its portfolio expirations occur after 2022, proving a clear snapshot into future rents.

“Omega’s portfolio is a success story and management has done a fantastic job generating returns for investors,” Vanacore says. The company’s model works because it captures relatively attractive yields on investment, they keep costs of capital low and spread to investment high, he notes, adding that Omega also mitigates risks through portfolio diversification by operator and geography. “As the largest owner of skilled nursing properties, [Omega] is a preferred partner for operators and maintains strategic advantages over its peers in terms of relationships, diversification, and costs of capital.” 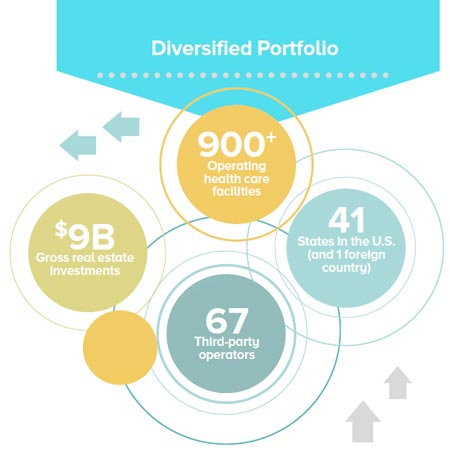 The dividend has increased for 16 consecutive years—good news for any company— but it is almost expected for REITs to be successful. According to financial filings, the stock returned 195 percent from the beginning of 2004 until the end of last year. That compares with 98 percent for the MSCI U.S. REIT Index (RMZ.) Shareholder return meanwhile tops 240 percent over a decade and hits nearly 60 percent over five years. When looking at three years, the company is up 24.3 percent, but it still trails the peer group’s 32.3 percent return, reflecting the recent challenging operating environment.

“They have one of the best long-term total return track records of any REIT,” Hartwich says, adding that the company has flown somewhat under the radar. “I don’t know if that performance is very well known.”

Indeed, demographics should drive the company’s future. The skilled nursing facility industry has battled “unfavorable demographics for more than a decade with the aging of the Silent Generation,” according to the company’s investor presentation. However, Omega believes this is just a lull and the industry is at the beginning of a 20-plus year secular tailwind. The boomers, the massive generation born predominately after World War II, started turning 75 in 2016. This cohort is expected to grow on both an absolute and relative basis until 2040, at the least, as the aging boomers require more advanced care.

The company’s results don’t yet reflect that. In financial filings, it points out that while industry occupancy levels have declined in recent years, its occupancy levels stabilized at 82.2 percent in 2017, above the industry average of 80.5 percent. That level is down from 84.6 percent and 84 percent, respectively, in 2009. With the length of stay declining, the fact that occupancy has been able to remain flat points to there being more admittances, the first sign of an increasing aging population, according to the company.

Unlike many REITs, much of Omega’s revenue depends on government reimbursements, which are set at levels that Omega does not control and that constantly face scrutiny due to budget constraints. Labor and other costs, however, will rise no matter what, particularly now that the economy is booming and skilled workers can be harder to find and retain.

Omega is prone to what’s known as “stroke of the pen risk,” because government action could quickly result in change. Still, Omega feels that the extent of the risk is somewhat overblown. “Skilled nursing operators provide a valuable and low-cost service, helping some of the most frail and needy in our own population,” Pickett says. “We do not believe that society is ready to turn their back on them. Furthermore, the low margins of operators highlight the limited opportunity for reimbursement reductions in this space.”

While these big-picture topics are factored into the company’s plan going forward, they’ve already weighed on some of Omega’s tenants. Signature Healthcare fell behind in its rent, forcing Omega to offer an out-of-court restructuring agreement that included, among other things, deferring rent for three years, providing capital expenditure funds for three years and extending a seven-year working capital term loan for up to $25 million at 7 percent. Two other tenants faced similar issues that have been resolved.

Another tenant, 4 West Holdings Inc.—better known as the geographically diverse Orianna—filed for Chapter 11 bankruptcy protection this year. In July, a legacy portfolio in Mississippi was transitioned to an existing Omega operator. Omega and Orianna, once a major tenant, experienced friction after Omega abandoned a proposed restructuring agreement, though that didn’t shake analysts. “While negative news at the margin, the issues with Orianna have been well-telegraphed, and the related value implications are largely already ‘baked in,’” Green Street notes.

Pickett expects the issue to be resolved. “The bulk of the work is done. We’re hopeful that by the end of the year that’s done and a lot of the noise on the tenant side goes away,” he says. “We think we’re at the trough of the headwinds that our operators face.”

The completion of the Orianna hurdle will be welcome. “With most of the major tenant credit issues … now behind the company, dividend risk has been meaningfully lowered, especially as earnings growth is likely to resume in 2019,” said Omotayo Okusanya, a REIT analyst with Jefferies. “That said, we hesitate to give the green light as we continue to watch for resolution of the Orianna bankruptcy and any other potential problem tenants.”

A development underway in Manhattan showcases the transformed Omega. On the Upper East Side, the company is working with Maplewood Senior Living to develop a 23-story, 212,000-square foot facility featuring 215 units of assisted living, enhanced care, and memory care. Renderings of the $270 million facility offering views of the East River show bright, modern units with access to a deluxe dining area, a second-floor library, and an indoor pool. It is expected to debut next year. The idea is “incredibly attractive,” Vanacore says. “You can charge premium prices and provide all the amenities any senior would want in an urban atmosphere.”

While Pickett is excited about the development, he heaps generous praise on the company’s partner. “We think about Second Avenue as showcasing Maplewood’s talent,” he says.

“It is a substantial investment in a market where we believe there is an enormous need. There is a dearth of product in Manhattan,” he adds. “We don’t think there will be any lack of demand for the product.”