How Blockchain Could Transform Real Estate

From asset management and investments to operating and management companies, blockchain could potentially have a profound impact across real estate. That is evidenced by the number of companies that are already emerging with their feet firmly planted in blockchain, ready to take on the new landscape of transacting real estate investments.

To speak intelligently about the future of blockchain technology, it’s best to abandon the preconceived notion that blockchain and cryptocurrencies like Bitcoin and Ethereum are one and the same. Actually, they are vastly different. Cryptocurrencies are cyber tokens or methods of payment developed to circumvent the involvement of financial institutions or other third parties when making or receiving payments.

Although initially developed as a way to securely transact cryptocurrencies, blockchain is best described in a Deloitte study, Blockchain and Commercial Real Estate, as “a decentralized, distributed, and public digital ledger that is used to record transactions across many computers so that the record cannot be altered retroactively without the alteration of all subsequent blocks and the consensus of the network.”

A simpler way to look at it is as an extensive computer code with imbedded “blocks” of information that runs in concert with a consensus driven “chain” of custody, that is, arguably, not capable of being hacked or altered. Blockchain is a hyper-secure, hyper-informed general ledger that allows participants in any transaction to verify and audit those transactions transparently, efficiently, and accurately, which reduces risk, costs, and exposure in any type of transaction.

Stephen King is founder and CEO of Imbrex. The company syndicates real estate data into a globally accessible marketplace, where data is locally sourced, validated, and secured via the Ethereum blockchain, smart contracts, and crypto economics. “Massive efficiencies will be realized once blockchain is fully implemented in real estate,” he says.

King points out that blockchain will have a marked impact on the lengthy process surrounding real estate financing. He notes that lenders will be able to verify property details by historically cross-referencing its documents, floor plans, environmental reports, repairs, and maintenance records with the property’s digital identity or “hash.”

With this, lenders will be able to qualify borrowers based on their digital credentials in seconds, versus days or even weeks today. Blockchain will also offer the ability to store sensitive information like credit scores, social security numbers, and transaction records in a convenient, secure digital form. “We can also obfuscate specific information and only share what’s relevant to the requesting party,” King says.

There are opportunities for blockchain in many facets of commercial real estate transactions including property and title searches, financing, leasing, purchasing and selling, due diligence, managing cash flows, and payment management, including cross-border transactions.

John Kim, leader of BMO’s U.S. blockchain applications and real estate group, says currency transactions will be an “ideal use” of blockchain for REITs, “as are applications around securities, land deeds, voting, registries and identity management.” He notes that “the maximum potential of blockchain in REITs will be unlocked once the entire real estate lifecycle is transitioned onto the chain.”

Listen to the podcast

Find out how blockchain could shrink differences in how public, private real estate returns are measured. 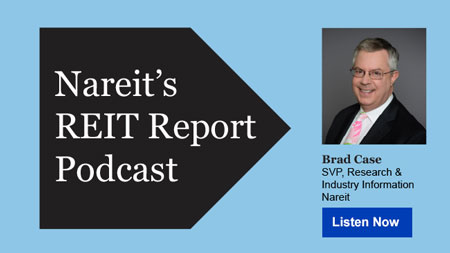 Formed in 2018, Building Block REIT claims it’s creating one of the first U.S. REITs utilizing blockchain technology in its operations and digitizing its shares on the blockchain. CFO Bruce Masterson says the firm’s early efforts are focused on investor-related blockchain transactions, while vendor and tenant-related transactions are being evaluated for inclusion as well. “In essence, we are building a tokenized REIT that is compliant with state and federal securities regulations,” he says.

Ken Zimmerman, CEO and founder of Chateaux Software, which develops blockchain applications for multiple industries including real estate, says, “By using blockchain in transactions like title and MLS search, escrow, and financing, there is an immutable, virtually incorruptible record of every transaction on a secure distributed ledger, which will be very disruptive and transformative to the way things are currently done in real estate.”

For instance, Knotel designs, builds, and operates custom spaces for established and growing brands. Since its founding, Knotel has raised more than $100 million in funding and its clients include Starbucks, Cheddar, Stash, and King. Jason Freedman, GM at 42Floors, a commercial property search engine recently purchased by Knotel, says: “We are using blockchain technology to access and contribute to a database of verified building and lease information.”

Freedman says Knotel currently spends about 2 percent of the all-in transaction costs on verifying information about each building and space. With hundreds of leases representing millions of square feet, these costs are a massive burden and are only getting larger. By using blockchain to incentivize data sharing throughout the industry, it will change the face of commercial real estate, creating major efficiencies and cost savings, he notes.

Bottom of the First Inning

The use of blockchain and tokenizing real estate holdings will also have a major impact on how individuals and institutions will invest in real estate going forward. Lior Abehassara, co-founder and head of investor relations at Leaseum Partners, says his firm is the first blockchain-based real estate fund in New York that pays dividends to its investors. “We provide our investors with flexible and efficient access to a portfolio of U.S. real estate with dividends that can be paid in crypto or fiat,” Abehassara says.

King of Imbrex summed up the future of blockchain in real estate: “Blockchain is only in the bottom of the first inning.” Data exchange is just now being tested in live environments, he says. There are several projects promising tokenization and transaction services. However, in order to reach that potential, there are certain steps that need to happen, according to King, and the first is connecting the physical real estate world to the digital world.

“With blockchain we now have the ability to do it in a safe, accurate, and secure way. Once this happens, all else will fall in place.” He notes that it will take time to map each address and for the real value to be extracted from this new technology. “However, blockchain’s impact will be an unparalleled paradigm shift for the real estate industry going forward,” he says.