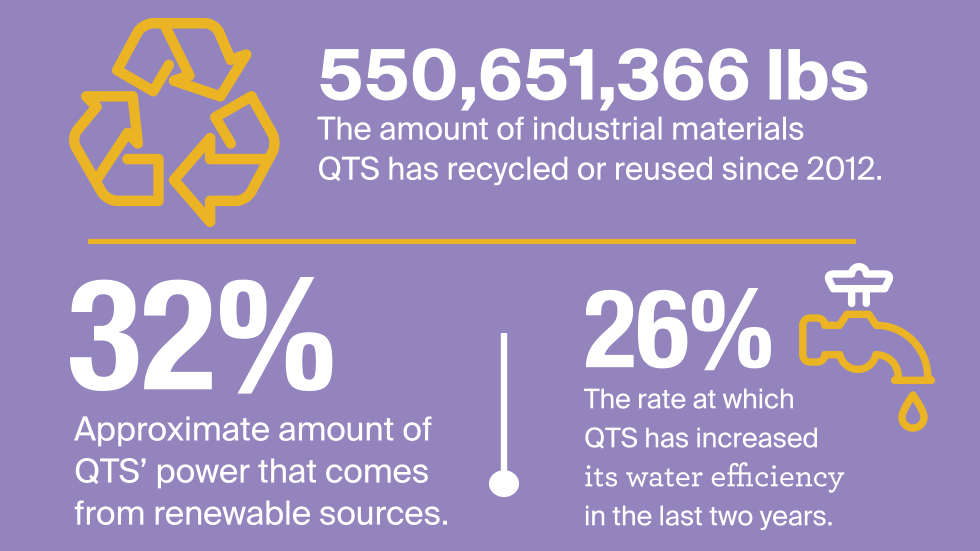 Investors are increasingly evaluating companies based on specific environmental, social, and governance (ESG) criteria, and the subset focused on “responsible investments” continues to grow. As a result, measuring and reporting ESG performance and telling a company’s story in this area through an annual ESG or sustainability report has become more common in recent years.

QTS, in business since 2003, owns more than 6 million square feet of data center space throughout North America. Like all data center owners, energy and water usage are significant operational costs. QTS CEO Chad Williams says board members encouraged the company to develop a written ESG report, which took about a year to compile, to quantify what the company was doing and to be more intentional about its focus.

“We’re among the first data center companies to produce an ESG report, which we plan to use as a benchmark and to move the data center industry holistically toward reaching new goals,” Williams says. “We’re trying to bring a balanced approach to sustainability and good governance, as well as careful stewardship of our shareholder’s capital.”

Issuing the ESG report wasn’t as big of a change for the REIT as it might have been because ESG initiatives have always been inherent within the organization, according to Williams.

“A fun aspect of the report is that not everyone in the company or among our partners knew about a lot of things we’ve been doing since the beginning,” he says. “People wanted to participate in the report, not for publicity, but because they wanted to share their beliefs and to talk about what they’ve been doing.”

QTS’s vision for the future includes a plan to procure 100% of its power from renewable energy sources and to pursue LEED certification for 90% of facilities by 2025. Since their ESG report was issued in April, some of QTS’s goals have already been reached, such as joining RE 100, a global corporate leadership initiative that brings together businesses committed to 100% renewable energy and reporting to the EPA Green Power Partnership.

“Producing an ESG report is a huge step for most companies because it can change its culture, define how you buy supplies, and impact how you partner with your customers and your community,” says Travis Wright, vice president for energy and sustainability for QTS. “It can be a little uncomfortable initially because transparency takes guts. But for us, the heavy lift of changing the culture was unnecessary because our culture of corporate responsibility was already in place.”

Measuring progress on initiatives such as conserving energy and water and managing waste, along with community involvement and governance practices, was the kickoff for the project, Wright says.

“We realized the real payback would be to clear hurdles for everyone, and would make it easier to make a positive change,” he says. “In addition to managing our own house, we work really hard with our energy suppliers and our state and local governments to help eliminate roadblocks and to reinterpret green tariffs and energy procurement strategies.”

The ESG report gathers findings on a variety of initiatives along with stories from employees throughout the company. “This way we can take the best practices from one site and push that information out to all the other sites,” Wright says.

The report revealed some of the achievements QTS has already accomplished as well as helped to set top-level targets that will be reviewed in future ESG reports.

Environmental: “QTS is committed to energy, water, and waste management,” says Wright. “We’ve taken these humongous brownfield sites and we’ve turned entire structures into amazing data centers. We’ve been able to recycle materials that would have ended up in a landfill and would have cost enormous amounts of energy to reproduce.”

So far, QTS has recycled or reused more than 550 million pounds of industrial materials. In addition, approximately 32% of QTS’s power comes from renewable sources. Over the last two years, QTS has reclaimed more than 30 million gallons of water and increased its water efficiency by 26%. The company plans to conserve at least 10 million gallons of water per year and to introduce electric car charging stations at all their facilities for employees and customers.

Social: QTS employees have spent more than 11,000 volunteer hours in their communities. Each employee is given three days of paid time off to volunteer at a charity that supports their local community.

“We have a director of community relationships to create programs that support the communities around our sites,” Williams says. “We offer our time, talent, and treasure to support local charities and donate our expertise to nonprofits to help them with things like cybersecurity.”

When QTS opens a new site, they look for a local impactful charity that needs support, Wright adds.

Governance: “We made several corporate governance modifications in 2018 such as rotating board committee chairs and members and bringing on new board members,” says Williams. “These were all just another way to show our shareholders that we represent their interests and are careful stewards of their capital.”

QTS also opted out of the Maryland Unsolicited Takeover Act (MUTA), which permits public REITs incorporated in Maryland to unilaterally elect to classify their board, and committed to a reduction in the company’s related party transactions.

“The biggest challenge for us during this project was not what we expected, which would have been resistance to being so transparent,” Wright says. “We had plenty of buy-in from our board members, executive leadership, and shareholders. The hardest part was collecting data and putting it into a format that makes sense for future reporting. So, we hired a third-party ESG consulting firm to help us with that.”

Williams and Wright, both enthusiastic about the value of their ESG report, plan to continue the practice annually.