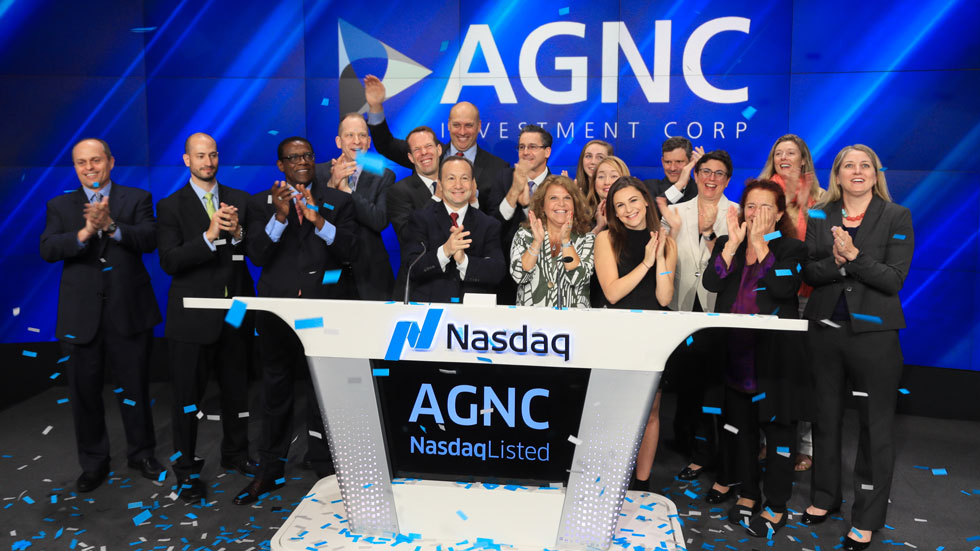 The company went public in May 2008 with a $200 million IPO and it did not change much in terms of size until 2009, says Peter Federico, president and COO of AGNC. “From 2009 to 2012 we experienced a really favorable time in the agency investment market. The company grew really quickly to over $10 billion in capital,” he says.

The big structural change for AGNC came in mid-2016 when American Capital put itself and its assets up for sale. AGNC management took that as an opportunity to internalize the company and purchased its manager away from its parent company.

“The whole industry has undergone some significant changes over these last few years, but AGNC has really been steady in terms of its business strategy and focus,” Federico says. “When we internalized, we also took that as an opportunity to expand our investment guidelines,” allowing the mREIT to invest in non-agency and credit-centric mortgage investments.

While that allowed AGNC the ability to diversify if opportunities presented themselves, there haven’t been many attractive investment entry points for these credit-type assets. That’s why the portfolio remains 96% allocated to agency MBS, Federico says.

“One of the things we hope investors have come to appreciate from us is really great transparency and disclosure,” Federico says. “We pride ourselves in enabling our investors to understand what we invest in and why. It was one of the reasons we moved to monthly disclosure and a monthly dividend.”

Henry Coffey, managing director of Wedbush Securitas, likes that AGNC is focused almost exclusively on managing the demands and complexity of investing in the MBS market and is not distracted by other investment areas. “This keeps them smart and keeps their cost low,” he says.

Federico credits AGNC’s management team and its experience in managing a leveraged investment portfolio with being key to the REIT’s success.

“It’s a phenomenal team. If you look at our management team, we have eight to 10 people with really deep expertise and great depth with a range of experience,” he says. “Gary Kain is our CEO and has been here since 2009 and is recognized as one of the thought leaders in the agency MBS market.”

Impact of the Pandemic

When COVID-19 became rampant in March, Federico says the financial environment was one of the worst the industry has ever seen, and it was uniquely bad because of the speed, magnitude, and breadth of the disruption to the market.

“At the beginning of March, the market had no appreciation for the significance of what was coming and during a two-week period in the month, we saw catastrophic market movement across all market classes, and that’s what made it so challenging,” Federico says. “It was a very stressful environment.”

AGNC’s strategy was to take a disciplined and concentrated approach with respect to risk management, positioning itself to take less risk. The company continued to rebalance its portfolio such that it was able to withstand the difficult market conditions and actually ended March with a better liquidity position than when it started the month.

“We lost 25% in book value during that month, but many lost much more,” Federico says. “Looking back on it, as difficult as it was—and it was extreme—it showed our business model works and going through this validated that. We were very pleased we were able to navigate that and position ourselves in a way that allowed us to recapture a lot of the value we lost.”

Since April, AGNC has enjoyed an extremely positive environment for agency MBS and is well positioned in the current environment, according to Federico.

One thing Federico says he has learned in this business is that whenever things seem stable, they always change.

“We maintain focus on what’s important,” Federico says. “You have to be focused every day, all day, on risk management and evolve the investment strategy to the environment.”

Looking ahead, Federico says favorable underlying fundamentals will be in place for the foreseeable future.

“The Fed is supporting agency MBS through ongoing purchases and they’ve indicated that they will continue to do to so to provide stability for the secondary mortgage market,” he says. “AGNC is well-positioned in this environment and has the ability to grow and our objective remains to generate the best economic return for our shareholders.”