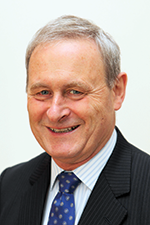 While business leaders may say they realize that the world is constantly changing, explaining how and why it’s changing can pose a challenge.

That’s Clint Laurent’s job. He runs Global Demographics Ltd., which counts more than 2,000 businesses worldwide among its clients. The research consulting firm compiles and analyzes demographic data to paint a picture of how a client’s consumer base could change over time. His 2012 book “Tomorrow’s World” sketched out a preview of what the global socio-economic structure might look like 20 years from now, as well as the implications for top decision makers.

REIT magazine interviewed Laurent about some of the most important trends—and misconceptions—that he thinks will define the global economy in the next two decades.

REIT: I always conceive of demographic shifts in the population of a country as being relatively gradual. Based on your book, I don’t get the feeling that is necessarily correct.

Clint Laurent: It’s sort of the classic, “Yes, you’re right, but, no, you’re not right.” You’re right in that, for most countries, it does tend to be a steady process—not necessarily a slow process, but a steady process.

REIT: What does a significant shift in population actually look like, then?

Laurent: What tends to happen is that it reaches a tipping point and goes over.

For example, in a lot of countries, the focus for the last decade has been on young households, in particular middle-class and above. What people forgot is that over the last 10 years, those people all got 10 years older. Over that 10 years, they all suddenly became middle-aged, older parents.

So, that big bulk that was important over the last decade effectively is reduced significantly in size, and those same people have now moved up and come to that next stage in the family life cycle.

REIT: Your company’s research covers 75 countries, and your book breaks that universe down into three distinct groups. Can you lay out what the differences are?

Laurent: If you think of a two-dimensional space with the vertical axis being average household income and the horizontal space being the percentage of the population over 40, all the countries in the world basically fall into three distinct groups.

You’ve got what we call the “old affluent”—countries where the majority of the population is over the age of 40 or 45. They all tend to have a household income certainly in excess of $20,000 and typically in excess of $60,000. By world standards, we’re talking affluent, mature, adult countries. They’re very important, because that little group is only 18 percent of the world’s population, but it accounts for 70 percent of every dollar spent in the world by households.

The second group is the “young poor,” dominated by India, North Africa and the Middle East. Over half the population is under the age of 24, and the majority of the population lives on an income under $15,000 and typically under $10,000. You’re talking about people with relatively low discretionary income and high propensities to have two or more children.

The third group is the “old poor.” That group includes China and countries from Eastern Europe. Eastern Europe and China have very similar characteristics in terms of spending power and the age distribution of the population. They’re as old as the “old affluent,” but they’re not nearly as affluent.

REIT: Can you give us a summary of some of your key findings on education standards around the world? If a country is lagging behind the rest of the world in education, is there any chance that it can catch up?

Laurent: Actually, I think education is probably the key variable that anyone should look at when they’re trying to assess different countries’ potential.

REIT: I’m glad that you’ve touched on China and India so much, because one takeaway from your book is that the importance of those two countries to the future of the global economy is generally overstated. Do you think that’s fair?

Laurent: Certainly there were an awful lot of people pushing investments in that part of the world without, perhaps, necessarily thinking it through. A little bit of skepticism in regard to these two economies is probably advisable.

Let’s start with China. As you know, China’s economy is already slowing. Even back in 2000, it was obvious that the labor force was going to stop growing. The number of people of working age peaked in 2010. The propensity to be employed in China for both males and females is almost the highest in the world, so China has almost effectively no spare workforce capacity.

If the number of working age people is declining, then it means the labor force will shrink. In the next 20 years, one in five people will leave China’s labor force. They’ll either die or retire.

The third factor that people always used to love playing in terms of China was rural-urban migration. It’s over. The rural area has been hollowed out of 15-to-39-year-olds.

Those three factors taken together mean that China’s economy has got to slow down. But, they’re re-balancing the Chinese economy to a more consumer economy, so the share of the economy going to the consumer will go up. At the moment, it’s the lowest in the world at 34 percent.

REIT: What about India?

Laurent: In India the productivity of the workforce is low, and it isn’t going to increase very rapidly. It will take 20 years before that lifts. In the meantime, it has this huge social problem of the number of people who basically are uneducated and will not be productive. That’s not going to go away quickly.

REIT: In light of your forecasts, what do you think are some of the biggest misconceptions or mistakes being made by the global business community looking ahead?

Laurent: Where my views differ from other forecasters is that I’m actually much more optimistic about the “older affluent” world. I think you’ll find a lot of manufacturing, productivity, more of those things will start to move back to that part of the world. That will result in a lift in incomes—and they’re already quite high—and make those economies quite strong. The emerging economies, while interesting, aren’t going to offer the same business opportunities as the “old affluent” economies.

The bias has been to the young innovators. In fact, they should be looking toward the older, well-educated innovators, as they probably have more growth potential.

For the property industry, just think of the implications of that. Consumer demand is going to move away from family products—household cleaning and things like that—and move more toward services and experiences. That might have implications for retail space. The type of housing that is going to be sought is changing, too. It may not be the large house in the suburbs, it may be the small apartment in the center of town.

You’re going to get some big shifts, and I’m not sure how much everyone understands the demographic changes that will drive those shifts.