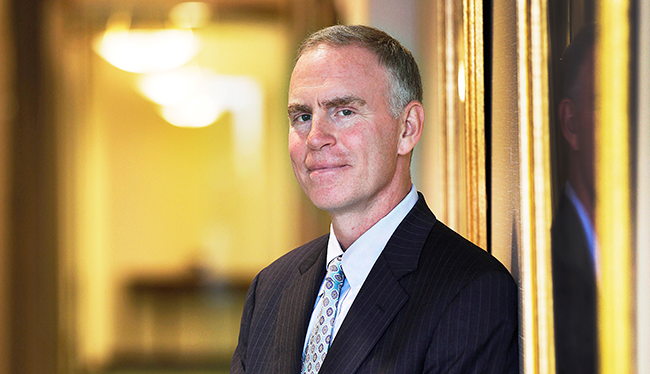 Late last year, W. P. Carey Inc. (NYSE: WPC) joined the ranks of publicly traded net-lease REITs, yet it is by no means a newcomer to its niche. The New York-based company marks its 40th anniversary this year, having evolved over the course of decades from a small financing firm into one of the world’s largest owners of net-leased assets.

Its predecessor, W. P. Carey & Co. Inc., was founded in 1973 by the late William Polk Carey, who hailed from Wall Street’s leveraged finance business. Carey was among the first to capitalize on the sale-leaseback model, a type of transaction that allows companies to raise money for expansion or other purposes by selling critical facilities and leasing them back on a long-term basis from the buyers. Carey pooled net-lease assets into investment funds that were initially structured as limited partnerships and then as publicly registered, non-listed REITs.

In 1983, his company played a key role in the headline-grabbing leveraged buyout of Gibson Greeting Cards by Wesray Corp., the investment firm headed by William E. Simon, a former Treasury secretary. Wesray sold several Gibson properties to the former W. P. Carey & Co. to raise capital for the buyout.

By the late 1990s, the company had launched more than a dozen investment funds through its Corporate Property Associates (CPA®) series and had more than $2 billion in assets under management. Yet, its founder, a proponent of diversification, wasn’t content to rest on his laurels.

While skeptics argued that he could not export the sale-leaseback model to Europe because companies there would be loath to sell their prized real estate holdings, Carey, who was fluent in French and had international investment experience, opened an outpost in Paris in 1998.

Today, the company, which subsequently moved its European headquarters to London, owns and manages an investment portfolio valued at $15.2 billion that spans 19 countries. A portion of its assets under management are held in its non-listed REIT affiliates.

The company’s properties are occupied by a highly diverse group of tenants – from retail chains to electronics firms – who lease space on a triple-net basis, which means that they typically pay all operations and maintenance costs. Nearly all of the company’s leases contain contractual rent increases that are fixed or tied to inflation.

We have a lot of different eyes looking at each investment

“Bill Carey had a firm conviction in the late ’90s, given the recent formation of the European Union, that the continent’s huge econ­omy would offer significant opportunities,” says Trevor P. Bond, the firm’s president and CEO. “The sale-leaseback model had not taken hold in Europe, and Bill was told that companies there would not want to part with their real estate. Today, the sale-leaseback model is a widely accepted corporate financing tool.”

Bond, 51, served as a director of the company and several of its non-listed REITs prior to becoming interim CEO in July 2010. He was named president and CEO in September 2010. At the time, Wil­liam Carey was chairman, a position he held until his death last year.

Since its foray into Europe, W. P. Carey has invested more than $3 billion there and, despite the current economic malaise, remains bullish on the continent. It has an asset management office in Amsterdam staffed by about 20 professionals who speak more than 18 languages among them.

In fact, W. P. Carey is one of the few net-lease REITs with a significant international footprint, which includes a growing presence in Asia. In 2005, the company opened an office in Shanghai, China, which has served as a base for its expansion in Asia.

The company’s path to becoming a public listed REIT last fall was a circuitous one. While a number of William Carey’s contemporaries took their companies public during the wave of REIT IPOs in the early ’90s, he opted to retain his investment firm’s private status. In 1998, however, he rolled up its first nine funds to create a publicly traded spinoff called Carey Diversified LLC. Two years later, he merged his firm with Carey Diversified, creating the publicly traded W. P. Carey & Co. LLC.

Last September, W. P. Carey & Co. LLC elected to become a publicly traded REIT and simultaneously merged with one of its non-traded REIT affiliates, CPA® 15, to create W. P. Carey Inc. The conversion and merger created a company of greater scale and diversity.

The company’s owned portfolio – which it amassed over time by retaining some properties that had been held in investment funds that were liquidated – nearly doubled in size as a result of the merger. In addition, the company’s revenue mix is now largely derived from rental income, as opposed to fee income earned for managing its REIT affiliates. About 90 percent of its adjusted funds from operations is now derived from rental revenues generated by its owned portfolio, according to Bond.

In July, the company announced plans to merge with another of its non-listed REIT affiliates, CPA® 16-Global Inc. Following the merger, the parent company is expected to have an equity market capitalization of $6.5 billion and a total enterprise value of more than $10 billion, making it the second-largest net-lease REIT by enterprise value, behind Realty Income Corp. (NYSE: O), according to W. P. Carey. Its owned portfolio will consist of about 700 properties leased to 231 companies worldwide.

Since becoming a REIT, the company has been added to a number of performance benchmarks, most recently Russell’s 3000, 1000 and Global indexes. W. P. Carey issued 28 million new shares last year, expanding its equity base by about 38 percent.

“The REIT conversion opened up the company to more investors, particularly institutions that need more liquidity and investors that can only purchase REITs,” said Daniel P. Donlan, an analyst at Ladenburg Thalmann.

Although the company now has better access to the public equity markets, its investment-management platform remains a critical part of its growth strategy. It markets its non-listed REITs to individual investors through a broker-dealer subsidiary called Carey Financial LLC. W. P. Carey and Cole Real Estate Investments Inc. (NYSE: COLE) are the only two net-lease REITs with investment management platforms, according to Bond.

The company turned heads in 2009 when it acquired a portion of The New York Times Co.’s headquarters for $225 million. The Times entered into the transaction to pay down debt and has the option to buy back the space in the 10th year of a 15-year lease.

During the financial crisis “investors wanted a more assured source of income at a time when there was concern about the equity and bond markets,” Bond says. “As a result, we were able to deploy capital at a time when much of the competition was off the field.”

Last year, W. P. Carey raised more than $1 billion in capital through its investment management platform, according to the company. It also had record-setting acquisition volume of about $1.4 billion for both its owned portfolio and its public, non-listed  REITs.

As it has done since its inception, the company evaluates each potential deal based on multiple factors, scrutinizing not just the underlying real estate but also the overall financial strength of every prospective tenant. Each deal is vetted by an independent investment committee.

“We have a lot of different eyes looking at each investment,” Bond says. “Bill Carey created an investment process within the company that remains in place, including establishing an independent investment committee that must approve each deal. Those checks and balances have helped us maintain our investment performance over many years.”

With “boots on the ground” in Europe and Asia, the company is poised to expand its global reach at a time when cap rates are compressing in the United States as a result of a heated acquisitions market. Although Europe faces serious economic and political challenges, the continent – which is home to more than 730 million people and generates about 30 percent of the world’s gross domestic product – remains an attractive market, according to Bond, with more than $30 trillion in assets under management. Right now, capital is constrained in Europe, which should create more robust demand for sale-leaseback financing among corporations, company officials say.

In Europe W. P. Carey has focused on doing deals with companies in recession-resistant industries, including do-it-yourself, home-improvement chains in Germany and Poland and multinational food retailers headquartered in France and the United Kingdom.

“We are witnessing the growing pains of European integration,” Bond says. “But if you look beyond the political gridlock, there are lots of good companies and wealthy people there, along with good established legal codes and stable governments. Europe has the necessary trust architecture that we look for when we invest abroad.”

In China, W. P. Carey has had a difficult time breaking into the immense market because it has had to compete for deals with heavily subsidized, state-owned companies, Bond says. But it has used its Shanghai office as a base to source deals throughout Asia and to forge alliances with potential investors, including Chinese mutual funds. The company made its first investment in Japan in 2012 and is evaluating opportunities in South Korea, Taiwan, New Zealand and other regional markets.

“China is a very difficult market at the moment and will continue to be until the government decides to deregulate and eliminate some subsidies,” said Bond, who is fluent in Mandarin.

W. P. Carey is keeping a close eye on Latin America, where it hopes to tap opportunities to provide sale-leaseback financing both to domestic companies and multinational firms entering the market. However, the region’s capital markets have undergone a correction recently, and the economic reforms that gave rise to its robust emerging markets have largely stalled, Bond notes.

“If Latin America can introduce greater price and currency stability and more transparency with respect to government, it will be a great source of opportunities for us,” Bond says. “There are some very strong companies and entrepreneurial traditions there.”