Fibras Get Their Footing

Fibras, the REIT equivalent south of the border, set the stage for growth potential 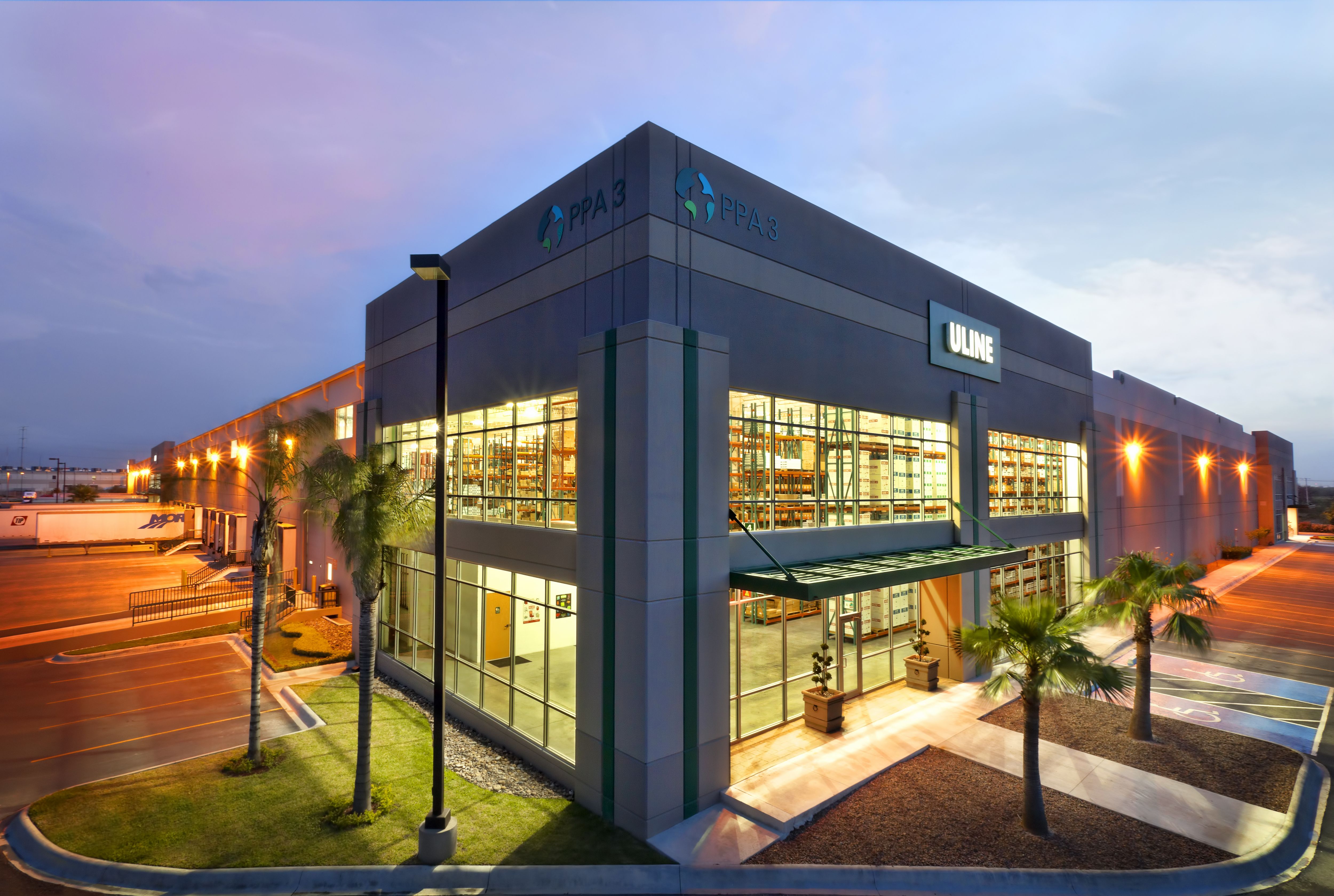 Fibra Inn (BMX: FINN13), one of the new players in the nascent market of publicly traded real estate in Mexico, represents a microcosm of sorts for the rapid growth underway in the broader market. The Mexican REIT specializes in business-traveler hotels under brand names such as Holiday Inn, Hampton Inn and Marriott. Fibra Inn had an initial public offering in March 2013 with eight hotels, and has been snapping up properties in 12 cities ever since, from Mexico City to Monterrey. The company plans to have 30 properties in its portfolio by the end of this year and 50 by the end of 2015.

“The Mexican public real estate market is in its early stages,” says Oscar Calvillo, chief financial officer of Fibra Inn. “There is a very fragmented market and opportunity for acquisition. The fibras in Mexico are very young and have a long way to go.”

Mexican REITs are know as fibras, an acronym for “fideicomisos de inversión en bienes raices,” and were first introduced in 2010, with the first company, Fibra Uno (BMX: FUNO11), going public a year later. More recently, fibras have gained traction by capitalizing on increasing investor interest, improving economic conditions and favorable government reforms. Mexico is also enticing business with its young workforce, with 46 percent of the population aged 24 or younger, compared with 32 percent for the United States. Along with its proximity to its northern neighbor and a growing middle class, the commercial real estate market offers plenty of opportunity in sectors such as industrial, office, hotel and retail, experts say.

As of July, eight fibras were trading on the Bolsa Mexicana de Valores—the Mexican stock exchange—with a combined total market capitalization of roughly $18 billion, according to Evercore Group. That is just a fraction of the overall valuation of commercial real estate in Mexico, estimated around $370 billion in 2013 by Prudential.

The fibra structure creates the same basic benefits of U.S. REITs by not being subjected to taxation at the entity level to the extent of distributed income. Fibras must distribute 95 percent of their net taxable income to shareholders in the form of dividends.

In order to attract investment capital to commercial real estate in the wake of the financial crisis, the government passed legislation establishing fibras in 2010. Fibra Uno was the first company to issue shares under the fibra structure in an initial public offering (IPO) back in 2011. Others followed, including FibraHotel (BMX: FIHO12), Fibra Inn and Macquarie Mexican REIT (BMV: FIBRAMQ). The IPOs are expected to keep coming. For example, U.S. REIT Prologis Inc. (NYSE: PLD) separated its Mexican portfolio in May of this year and raised $541 million in June for the IPO of Fibra Prologis (BMX: FIBRAPL 14).

“We are very optimistic about Mexico,” he says. “The fibra provides a good long-term vehicle to provide competitive capital for growth, and it’s an attractive vehicle for investors.”

The Mexican government is in the process of passing legislation for a series of ambitious economic reforms to boost growth. One big change is the expected passage of energy reform measures. In telecommunications, the government passed new rules in July aimed at allowing for easier entry into the market by startups.

The government also overhauled the tax code at the beginning of 2014 with the intention of making it harder for corporations and the wealthy to evade taxes. The anticipated boost in tax revenue has been earmarked to finance social programs. While in the short run the higher taxes will need to be absorbed by the economy, the changes will, in time, make the country more attractive for investment and increase competition, Calvillo says.

Other macroeconomic factors are helping stimulate the Mexican real estate market too. Mexico’s manufacturing sector is one of the most competitive globally, notes Sheila McGrath, a managing director for investment banking firm Evercore Group. The size of its working-age population is forecast to grow faster than other countries, and the middle class is expanding. The automotive and aerospace industries have also invested heavily in Mexico. 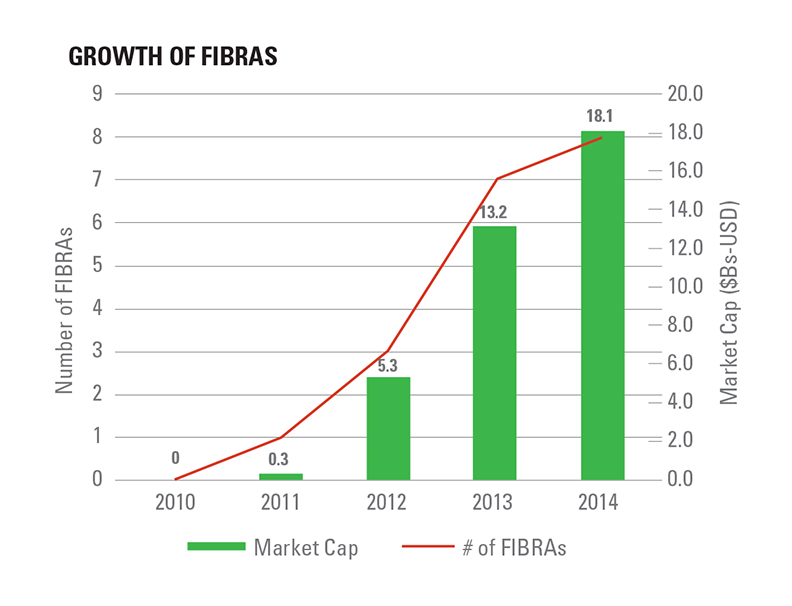 “The rental rates in Mexico across the board for industrial, office and retail are much lower than other Latin American countries,” she says. “The rental growth could be much stronger than inflation, making it an interesting opportunity.”

Mexico is also benefiting from a “re-shoring” trend as global companies move supply chains back from Asia to this side of the Pacific Ocean. Higher labor costs in China are making Mexico a destination for manufacturing, notes Lorenzo Berho, chairman and chief executive officer of Vesta (BMX: Vesta), an industrial real estate company not organized as a fibra. It has chosen this strategy in part to retain more of its operating income to fund its primary strategy of Class-A property development.

“Mexico is increasingly being seen as a destination for global manufacturing and distribution operations among leading multinational corporations as companies return their operations from Asia back to North America,” Berho says.

This all bodes well for real estate, both directly (industrial, office, hotels) and indirectly (retail), as more capital flows into the country. Given that fibras now represent only a small fraction of total commercial real estate market cap, more companies will go public and existing companies will acquire privately-held assets, McGrath notes.

The increased focus by multinational companies on Mexico is also good news for other sectors. Hotels are one, especially those focused on business travelers. Much like Fibra Inn, FibraHotel has benefited from access to capital to accelerate its expansion. Prior to its IPO in November 2013, it took 17 years for it to finance the growth of its portfolio to 17 hotels, most of it through private equity. It had 47 open in early July, with plans to have 100 hotels open by the end of 2015.

“You see the growth the company has had in just the past year,” says Guillermo Bravo, head of corporate development and investor relations at FibraHotel. “It’s phenomenal the scalability that the fibra model provides.”

The hotel fibras are expected to be among the most aggressive sectors in accumulating assets. Transaction volume in hotel investment in 2013 was $600 million, up from $100 million in 2009, according to research by Jones Lang LaSalle. That’s expected to grow to $700 million this year. In 2013, the fibras represented 50 percent of the transactions. “You can see that they are a main player in the market,” says Alfonso deGortari, head of JLL’s Mexico hotels team. 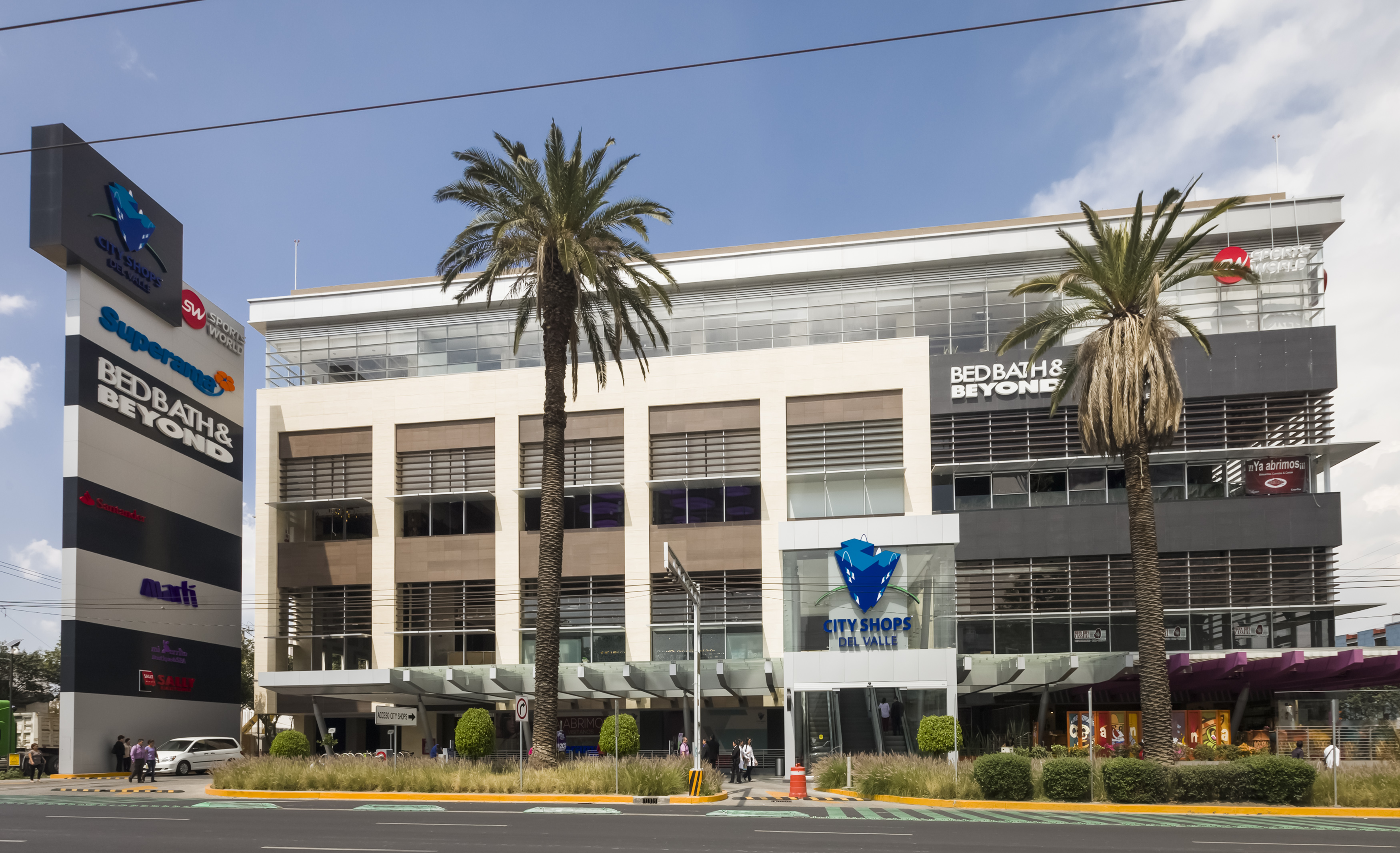 Other fibras have chosen diversification over pure play, such as Macquarie Mexican REIT, which has invested in the industrial, office and retail sectors. It has been buying up smaller portfolios, such as a 50 percent interest in nine retail properties from Kimco Realty Corp. (NYSE: KIM) in March for $113 million.

“At this point, the Mexican market is still relatively young, and we wanted to make sure we would be covering the best acquisition opportunities in each one of these major property types,” says Jaime Lara, chief executive officer of the fibra.

Still, fibras have work to do to lure institutional money in light of concerns by some investors over lack of governance and management guidelines that are being utilized by REIT peers in the United States and other markets. For instance, much like the early days of U.S. REITs, fibras are required by law to be externally managed, where management collects a fee for its services. Policymakers chose that model to make it closer to the experience of owning a property and hiring a manager to manage it.

That might be okay for Fibra Prologis and Macquarie Mexican REIT, which can benefit from the good governance practices of their parent companies. But for family controlled fibras, external management becomes problematic, says David Henry, president and CEO of Kimco, which is currently divesting from Latin America (see sidebar on page 20).

“That is out of favor with most institutional investors,” he says. “They don’t like the conflict of interest when somebody else is getting the fees for managing the assets.”

Fibra fee structures vary from one company to another. Some charge fees for acquisitions, and others levy incentive fees for appreciation of the stock. But eventually, fibras could follow the course of U.S. Equity REITs, whose modern era beginning in 1991 was made possible when in 1986 Congress allowed REITs to internally manage their assets.

“Over time, we believe that fibras will likely become more fully integrated, where everything is under one umbrella without the various fee structures,” McGrath says. “I don’t think it necessarily has to stay this way, and we would definitely view that potential evolution favorably.”

That said, some investors can accept the status quo and are jumping at the chance to get in early. Fibra Uno, the largest and most liquid Mexican REIT with investments in retail, office, industrial and mixed use, had a follow-on offering on June 10 that was oversubscribed and raised $2.5 billion. On a smaller scale, Fibra Inn had its own follow-on offering in March for roughly $66 million.

Executives are just as enthused.

“We see tremendous growth opportunities,” Lara adds. “As the Mexican economy continues to grow—hopefully at a more accelerated pace—there will also continue to be new, high-quality companies coming to market.”

Kimco Capitalizes on Mexico's Growth by Getting Out

While macroeconomics and reforms point to the potential for big gains in Mexico, some companies see more value for their shareholders in being sellers. Kimco Realty Corp. (NYSE: KIM) has embarked on a strategy to exit Latin America entirely. Kimco has cited lack of scale and inefficiency of tax structures as reasons to leave. It also has answered the call of investors to stick to investing in the U.S. (Puerto Rico and Canada excepted), mainly leaving foreign investment to locally based, emerging REITs.

Last year, Kimco fetched $1.1 billion in its sales. In June, it announced the sale of another four retail properties from its Mexico portfolio for a gross sales price of roughly $82 million. The company plans to have sold off most of its Latin American portfolio by the end of the year. By early July, two-thirds of its announced deals had closed.

“We never really got much credit from the investment community for being in Latin America,” says David Henry, vice chairman, president and chief executive officer of Kimco. “As a public company you get a scorecard everyday: the stock price. Even if the long-term bet is sound logically, if the market would prefer you not be there, you have to salute.”

So for Kimco, it’s carpe diem, given the demand by existing fibras for high-quality retail portfolios in Mexico.

“The capital markets have come alive down there,” Henry adds. “The Mexican REITs—the fibras—have come to market, and they all need product. So if you are going to exit and sell your assets there, it’s a good time.”