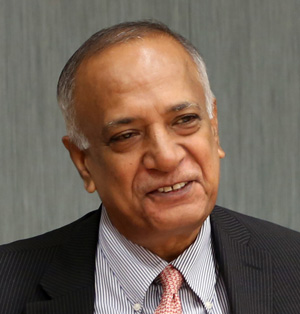 What has been the biggest challenge in terms of launching REITs in India?
The main challenge in establishing a framework for the new product is to know what is happening in different jurisdictions of the world. What are the best practices prevailing elsewhere? And how to actually dovetail some of those into the Indian conditions so that it is easily applicable and easily implementable in India.

The second challenge is that... while the regulatory prescription was very widely welcomed as a good starting point, there were a number of tax issues which were raised by all the market participants.

The Indian government, in three consecutive budgets, has simplified the tax structure to virtually the satisfaction of everyone. Now we are in a position where the regulatory framework is in full place and the taxation issues have all been dealt with.

How closely is the Indian REIT regime going to match the U.S. model?
There are a number of very similar features between the U.S. and the Indian regulations.

For instance, as for the U.S. regulations, 75 percent of a REIT has to be invested in property. In India, it is 80 percent.

In the U.S., 90 percent of [a REIT’s taxable income] has to be distributed as dividends. So is the case with India.

Do you think the Indian market would accept internally managed REITs?
Right now, the Indian market is very happy with what we are proposing in the regulations. The general estimates are that within two or three years, the size of the REIT market in India will be not less than $20 billion.

The external management concept in India has been accepted, but there is a particular type of request that we should be in a position to consider internal management as an alternative down the line, which we are not averse to at all.

How do you see the introduction of REITs impacting India’s capital markets?
The real estate capital market in India has been an unregulated type of thing for too long … so best practices are going to come in.

In India, there wasn’t much stock of REIT-amenable assets earlier. Now, latest estimates are that almost 290 million square feet in India is available which could be subject to conversion to REIT status, so there’s tremendous potential for the growth of REITs.

There is a good chance for foreign investors to take part in what is happening in India in the real estate and infrastructure sector. From a developer’s point of view, it’s going to be a good way to raise capital.

So, there are investors, there are developers and there is a good stock of REIT-amenable assets. All the three elements that are required for a REIT industry to take off are present in India at this point in time. We see a good future for the sector.