What a Difference a Year Makes

During my tenure this year as NAREIT Chair, a number of notable developments occurred that should help shape and strengthen the REIT industry in the future.

In September, Real Estate made the eagerly anticipated move to its own headline sector under the Global Industry Classification Standard (GICS). Much like when REITs were added to the S&P indexes, elevating Real Estate to a headline sector will increase the visibility and prominence of REITs and publicly traded real estate companies in investment portfolios. This change was certainly a watershed moment for our industry.

Over the past year, U.S. REITs, meanwhile, found themselves on firm financial footing. The total return of the FTSE NAREIT All REITs Index in 2015 bested the S&P 500 for the second year running. With a gain of more than 14 percent through the first eight months of 2016, REITs are on pace to make it a third straight year, as the S&P 500 was up 7.8 percent during the same period.

In June, the Brexit vote had a measurable immediate impact, but the global markets, especially in the U.K., are continuing to sort through the long-term impact on real estate. As documented in this issue of REIT magazine, the nature of real estate in the current economic environment—particularly U.S. real estate—should likely continue to hold significant appeal for investors around the world.

Working closely on NAREIT matters over the last 12 months vividly confirmed to me that NAREIT CEO Steve Wechsler and his capable and dedicated team at NAREIT are an invaluable resource for us as we work to extensively communicate, domestically and abroad, about the REIT approach to real estate investment.

Of course, I’ve also seen that our successes are made possible thanks to the skill and engagement of NAREIT’s members, whether they are senior executives at REITs or industry professionals. When NAREIT meets with investors, policymakers and other stakeholders, our collective story is told—all done with the cohesive collaboration of industry members and NAREIT’s talented staff.

I am profoundly grateful for the opportunity I have had to serve as Chair and help to educate and spread the word about REITs and publicly traded real estate. Lastly, registrations for at REITWorld 2016: NAREIT’s Annual Convention for All Things REIT in Phoenix are robust, and we look forward to another successful convention. 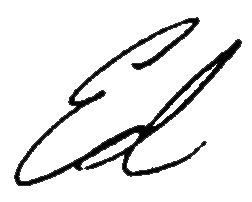