A booming middle class is a boon for real estate in Asia. 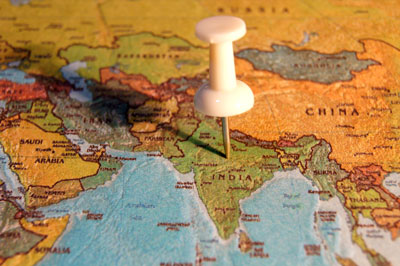 When it comes to the growth of REITs and publicly traded real estate companies in the Asia Pacific region, it’s all about the middle class.

The astounding growth rate of the middle class in developing nations will fuel demand for all classes of real estate, including office, housing, retail, industrial, data centers, infrastructure and hotels. Each year, 140 million citizens are joining the middle class annually, according to a 2017 report by the Brookings Institution. That amounts to roughly 384,000 people per day, the equivalent of adding the population of New York City to the world’s middle class in 22 days.

“The primary goal is to use REITs as efficient vehicles for nation building, while at the same time delivering wealth creation,” he says.

The economies with established REIT regimes in the region can serve as examples for the developing economies, Verwer notes. Japan and Australia are the biggest markets in terms of market capitalization; Hong Kong and Singapore also developed REIT regimes to securitize real estate and provide stable returns for investors.

The governments of the most populous Asian nations—China and India—are now working out appropriate REIT policies that meet the needs of sponsors and investors alike. Other developing nations, such as Malaysia, the Philippines and Vietnam, are facing their own hurdles as they develop individual REIT regimes.

These developing economies are contributing to solid growth in gross domestic product. For example, annual GDP growth of major Asia Pacific region economies—India excluded—is expected to reach 4.4 percent in 2017 and 4.5 percent next year, according to research by UBS Asset Management. Annualized growth for China is predicted to be 6.7 percent this year, according to the International Monetary Fund. For India’s fiscal year ended March 2018, it’s expected to be 7.2 percent. 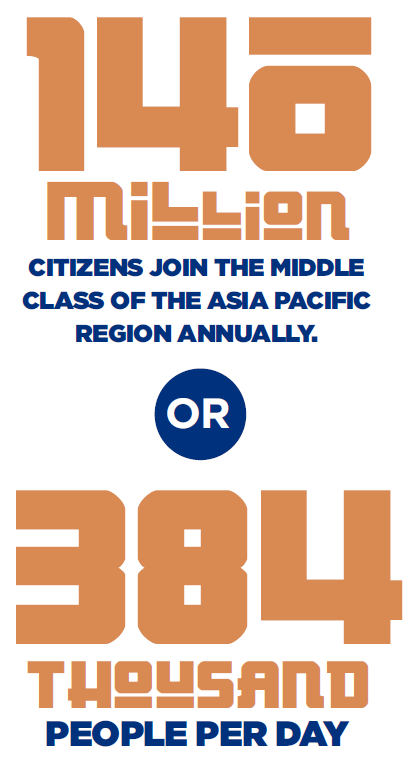 This growth feeds the middle-class expansion, shifting consumer demand, says Shaowei Toh, a director of research and strategy for real estate and private markets in UBS Asset Management’s Asia Pacific region. “They used to need basic housing, now they want private housing,” he says. “History has shown us [that] when the middle class starts to expand strongly, there is a greater demand for fast-moving consumer goods.”

That means more growth for real estate such as warehouses, offices and housing. To meet the demand, sponsors will need all the financing they can get.

“Developers need multiple sources of capital,” says Regina Lim, head of capital markets research for Southeast Asia for Jones Lang LaSalle Property Consultants in Singapore. “At the same time, with the growing wealth in the region, people need to put their savings somewhere, and the REIT provides [quality assets] which act as an inflation hedge.”

India on the Cusp

In terms of establishing REIT regimes, India is getting there. The Securities and Exchange Board of India (SEBI) allowed for the creation of REITs and infrastructure investment trusts (InvITs) in 2014. Two initial public offerings of InvITs were listed earlier this year on the National Stock Exchange: IRB InvIT Fund, which owns toll roads, debuted in May; India Grid Trust InvIT, which owns power transmission projects, listed in June.

Office and information-technology parks are expected to be the first REITs. Real estate owners such as DLF, Blackstone, Embassy Group, K Raheja Corp. and RMZ are all possible participants. For example, Embassy Office Parks, a joint venture of Embassy Group and Blackstone Group, filed last December with SEBI for approval to register its REIT. This year it has been working to select assets among its roughly 20 million-square-foot portfolio to put into the structure.

The delays in REIT listings are due in part to outstanding regulatory and tax issues, experts say. The slow progress is nothing new for nascent REIT regimes. Some, such as Singapore, have taken as long as a decade or more to get going.

In India, moving assets from one company to another takes time in terms of getting regulatory approval, says Rajeev Bairathi, executive director and head of capital markets at Knight Frank India’s Gurugram office, near New Delhi. While the federal government has clarified rules, real estate owners must also deal with the states, which have their own regulations and transfer taxes, referred to as “stamp duties.” Those taxes range from 4 percent to 8 percent depending on the state. 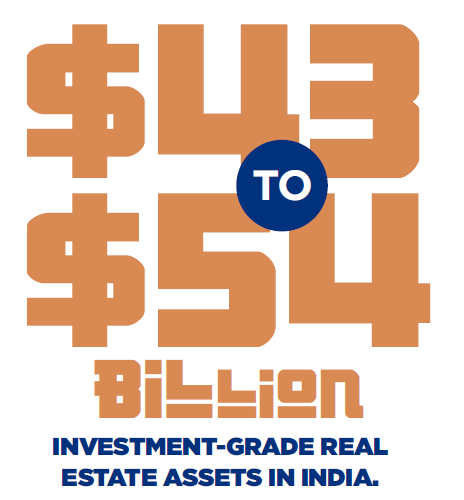 “That is a prohibitive cost,” Bairathi says. One possibility is that the government waive the stamp duty if a property is held for a period of years. Alternatively, states could issue a one-time waiver of transfers of assets to REITs.

In the meantime, there’s plenty of inventory that would qualify for securitization in India. About $43 billion to $54 billion of properties in the commercial markets would be investment opportunities for REITs, says Cushman & Wakefield.

In the office sector, there are 280 million square feet of space considered REIT-worthy among the top seven metropolitan areas in India, according to JLL.

“Occupiers increasingly prefer those landlords who are able to provide a full set of amenities and infrastructure to support the business and its employees,” says Mike Holland, chief executive of Embassy Office Parks. While Embassy wouldn’t comment on the status of its REIT formation, Bairathi noted that the first REIT IPO likely won’t come to market until 2018.

Until things get worked out for the first REIT listings, sponsors can take lessons from the InvIT IPOs, Bairathi adds. Both of the InvITs traded around a 6 percent to 7 percent discount to net asset value in mid-July, he noted, with the market deciding that the IPOs might have asked for too much. “In the perception of investors, it was a bit of aggressive pricing,” Bairathi says.

Infrastructure is also viewed as more organized and transparent than real estate, so the first REITs can follow their lead. “Transparency and disclosures will be extremely important in the first real estate” offerings, Bairathi says.

China lags behind India’s progress in terms of laying the groundwork for REITs. It has yet to pass legislation that would set up a universal framework in terms of taxation and rules. In the meantime, regulatory authorities have encouraged the development of various market prototypes—often referred to quasi-REITs—to test different securitization formats. These quasi-REITs have generally taken the form of structured financings or asset-backed securities, rather than equity instruments. 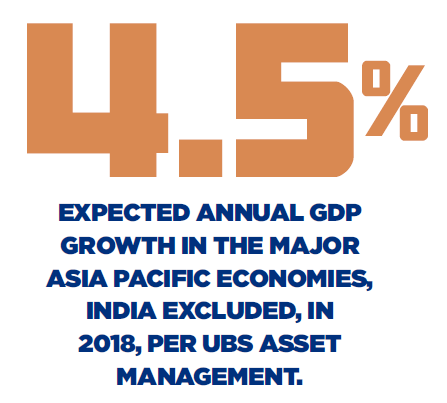 “It’s a very rational and quite scientific public-policy process,” Verwer says. “The idea is to test out different models in different parts of the country for different asset types and learn from those processes before they start writing any black-letter law. The expectation is that this process will continue for a few more years.”

The government needs to concentrate on tax-related issues and make decisions on external versus internal management of REITs, Lim notes.

Low rental yields and lack of professional asset managers are also stumbling blocks, according to Lim. Meanwhile, China’s property development model allows for building projects to be sold to investors in pieces, which can complicate management of the properties.

Bottom line: It’s a waiting game in China. Meanwhile, demand for real estate will continue to build. Five hundred million people have moved to the cities in the last 20 years, with more urbanization to come.

“There is a lot more runway,” Verwer says.

Regardless of the timing for REITs in India and China, established REIT regimes now serve as a conduit for all investors in Asia.

Australia, which introduced its first REIT in 1971, offers a stable market, which hasn’t had a recession since the early 1990s. “You’ve got a very mature, transparent and very well-performing REIT market,” says Ken Morrison, chief executive of the Property Council of Australia.

The country continues to receive capital inflows from the United States, Europe,  Japan, Singapore and Hong Kong. Yet other ascendant countries, such as South Korea, China and Malaysia, are increasingly sending money Australia’s way. “We’re seeing a lot of capital looking to take an exposure to Australian property markets, and they are seeing the REIT sector as a way to do that,” Morrison says.

Many countries could also stand to gain by tweaking their legislation to give REITs a choice of structuring themselves via external or internal management. In the Asia Pacific region, only Australia, Japan and Hong Kong allow for the distinction, Verwer notes. That turns many investors off, who see external management as a conflict. “The only choice they have now is not to invest if they don’t like the model, whereas if there is the option for internal management, then they can use their influence to shape the market,” Verwer says. 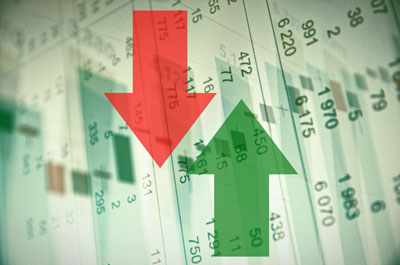 That said, given Asia’s growing middle class, the demand for more real estate is not far behind. That will further the need for more tax-efficient and transparent REIT regimes.

Build them and they will come, Verwer says: “It’s very early days.”

A number of Asian countries either have plans to introduce REIT regimes, or they are in the process of upgrading them to attract more IPOs and investment. The hope of investors worldwide is for countries to adopt “state-of-the-art” regimes with world-class governance and disclosures.

“In terms of legislation, ideally it would allow the investment in the widest possible range of investment-producing asset classes,” says Peter Verwer of APREA. There also should be clarity of rules in relation to leverage and what are active and  passive income.

Countries that have passed legislation for REITs haven’t necessarily attracted investment because the laws don’t go far enough. For example, the

Philippines passed legislation in 2009, but there hasn’t been a single IPO since then. One reason is a 12 percent tax for real estate owners who want to convert to REIT status. That’s hardly appealing, Verwer says.

“The Filipino sponsors and developers who built and own the assets—the big families—are obviously not going to give away the family silver,” he says.

Malaysia is working on a revision to its structure to be more in line with international standards, such as raising development limits and increasing corporate governance provisions. The country is also working to include guidelines for Sharia-compliant REITs, given that roughly 60 percent of the population practices Islam. The legislation is expected to be announced later this year.

Similarly, Vietnam has one REIT, but it is looking to mainstream its REIT model.

Abu Dhabi, the capital of the United Arab Emirates situated on the Persian Gulf, is expected to have an IPO for an exchange-traded REIT by the end of the year, most likely to be tourism and entertainment related, Verwer says. Currently, the city has four unlisted REIT-like companies.

Meanwhile, Sri Lanka is looking at redrafting legislation as part of its regime.

The hope is these countries follow the lead of successful REIT regimes by adopting similar frameworks, such as those seen in the United States, Japan and Australia, Verwer notes. He likens it to having an old smartphone and skipping over years of models to upgrade to the latest version.

“These countries with models that are less favorable to REIT creation and attracting investors can leapfrog over other regimes,” Verwer says.