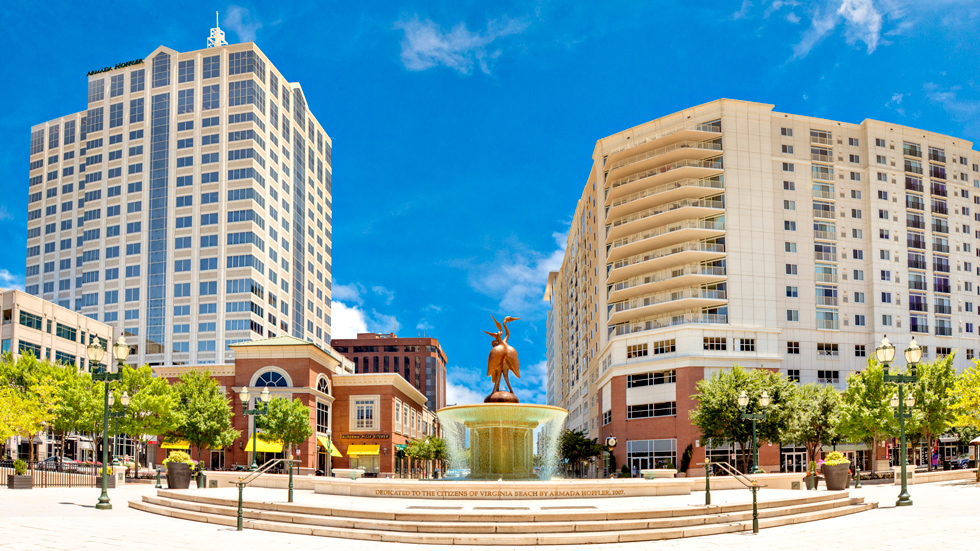 A 19-year collaboration between Armada Hoffler Properties, Inc. (NYSE: AHH) and the city of Virginia Beach has turned vacant land into a vibrant cultural and business hub—realizing a goal that city officials have had for the area since the 1970s.

This summer, Armada Hoffler put the finishing touches on Phase VI of its multi-decade development of Virginia Beach Town Center, the city’s mixed-use central business district (CBD). The latest additions to the project include an additional 39,000 square feet of retail space, 130 residential units, and an open-air elevated public plaza with a pedestrian bridge connecting to a parking garage. The city will also unveil the Zeiders American Dream Theater, a 17,000-square-foot, 310-seat experimental nonprofit theater for emerging artists with a focus on local talent.

“It will offer an up-close experience of unique forms of cultural expression in the heart of Town Center,” explains Warren Harris, director of economic development for Virginia Beach. Harris describes the long-term public-private partnership between Armada Hoffler and Virginia Beach as a “win-win-win for the city, Armada Hoffler, and the community at large.”

Turning the Tide of Development

Virginia Beach is the largest city in Virginia with a population of about 500,000, part of the 1.8 million-person Hampton Roads MSA. Town Center sits at the heart of Virginia Beach, but prior to its advent, the city lacked a designated CBD, and instead gradually developed the suburban and big-box consumer landscape typical of the area.

Beginning in the 1970s, city leadership made steps toward changing the development direction.

“It was clear in our vision as a city that we needed to consider going vertical in terms of our development pattern, increasing density as a part of that vertical strategy,” Harris says. “That meant moving away gradually from the preexisting suburban development strategy in the area to a more urban, denser mixed-use format in key areas of the city,” he adds.

Over several decades, Virginia Beach officials worked to preserve a space in the center of their population base at the intersection of two major streets, Constitution Drive and Virginia Beach Boulevard. As part of this evolution, the city’s planning department and city council supported the creation of Strategic Growth Areas (SGAs), such as its Pembroke section, to catalyze this vision for a new growth pattern.

“We had several attempts at starting to develop a CBD that never got off the ground,” says Mark Wawner, project development coordinator for the city’s Economic Development Department.

Partnering Toward a Unified Vision

Things changed when Armada Hoffler entered the picture in 1999.

“The city’s leadership had the foresight to recognize they were always going to be a bedroom community unless they could bring about the advent of a CBD,” says Armada Hoffler President and CEO Lou Haddad. “All they were really missing was the private partner to make that happen.”

Thanks to the city’s preservation efforts, the designated area offered a blank canvas for the developer, since most of the land sat vacant, except for one suburban-style building at its center. Armada Hoffler and the city began working together for six months to craft a financing mechanism that would allow this project to move forward. Construction on Phase I began in 2000, culminating in 2002 with the unveiling of the 23-story Armada Hoffler Tower, as well as retail and parking components. In 2003, the company moved its headquarters to Virginia Beach and has been a mainstay in the area ever since.

The mixed-use Virginia Beach Town Center will ultimately meet a wide range of real estate needs for the community, including:

“Public-private partnerships played the central role,” Haddad says. “This would have never happened without the city’s foresight and without our ability to execute on their vision.”

Development continued and withstood challenging periods for the country at large, including the aftermath of the Sept. 11 terrorist attack and the global financial crisis from 2007 to 2009.

“Town Center was able to maintain its character, to stay close to its original vision and still thrive throughout that period,” Harris notes, attributing much of that continuity to working with “a true partner” like Armada Hoffler.

The long-term nature of Town Center’s development called for collaboration over multiple administrations and city councils, as well as changes in the market.

“Often times a project with multiple phases takes a big commitment to stay true to the vision and not abandon it for fear or willingness to compromise or adapt,” Harris says. “For us—the city and Armada Hoffler—to both have the same long-term vision has certainly been a plus to the city.”

An essential driver of the overall vision was to create stable employment opportunities for residents.

“There have been significant employment gains,” says Wawner, who estimates that the creation of office space has brought as many as 3,000 employees, while restaurants and retailers have added an additional 2,000 jobs.

In 2014, the city and Armada Hoffler unveiled 4525 Main Street, a 15-story LEED Silver certified building featuring office space, retail, and housing. Architecture firm Clark Nexsen designed and anchors the building. Other tenants include Mythics Inc., a software and Oracle systems integrator, whose addition highlights the city’s emergence as a destination for technology-focused companies.

“We’ve established Virginia Beach Town Center as the destination for architectural and engineering groups, and we’re hoping that we can become a hub for technology as well,” Haddad says.

Virginia Beach realized its vision for verticality and high-rise office space that captures high-paying jobs for residents, but it also left room for adaptability and growth, according to Haddad. 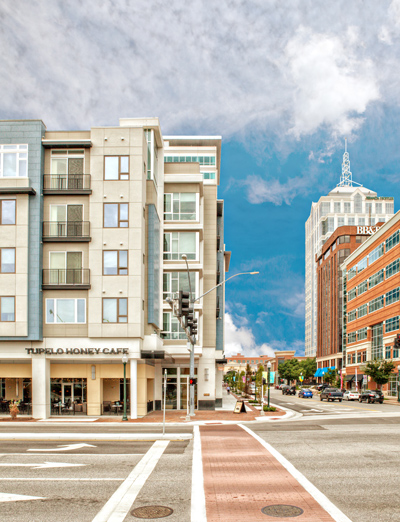 “We’ve adjusted accordingly to market changes and moves toward ground-floor walkability, fast casual restaurants, and retail services over a model heavy on soft goods. All in the name of making a walkable, livable community,” Haddad says. “While the vision remains the same in creating a downtown, with our partner we’ve adapted to take advantage of what is prevalent in the market.”

While the city’s new verticality first presented an unfamiliar sight to residents, the creation of city streets, parkscapes, and plaza areas have helped integrate the new high rises and multilevel parking structure into a fully-fledged, live-work-play community.

“From 7 a.m. to 2 a.m. it’s alive and hopping,” Wawner says. As part of Phase III in 2007, nearby Sandler Center for the Performing Arts—a 1,300 seat theater—relocated to Town Center and has featured close to 5,000 events welcoming more than 1.3 million patrons since its opening. The Virginia Sports Hall of Fame also relocated to Town Center last year. The city welcomes events and exhibitions including the recent LEGO® Americana Roadshow in July.

“It has become the gathering point for the community, it really is the cultural and business center of the city,” Wawner says. “It was something we were dearly lacking prior to its development.”

Haddad adds that the community has “really claimed Town Center as their own, which is a great tribute to the success.”

As the Town Center project has developed a sense of community, it has also upped the demand for residential units in the CBD, a pleasant surprise to Virginia Beach officials.

“We have seen dramatic growth all around the project,” Wawner says, who is in his 29th year with the city and has seen the evolution of the project. “Everyone now wants to live close to or near Town Center.”

The demand for housing is another facet where Armada Hoffler has stepped up. “Multifamily has been a big part of what we do here as well. With the delivery of Phase VI, we’ll have [more than] 800 residential units here in Town Center’s core,” Haddad says.

According to the city’s Economic Development Department, the assessment growth in the area has gone up eightfold since 2000. Armada Hoffler has made close to $500 million in private investment that’s been matched with approximately $200 million of public investment. The success of Town Center has also spurred development in surrounding areas of the city by other developers benefiting from new development patterns catalyzed by Town Center. 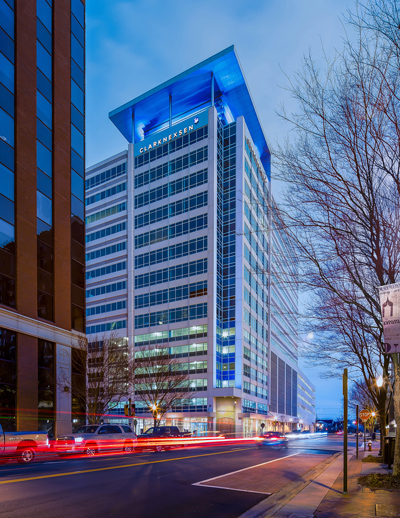 “The real estate taxes generated off of our development are paying off the bonds that the city issued in order to create the parking garages, streetscapes, and infrastructure,” Haddad says. “In the meantime, the ancillary taxes, meals taxes, and sales tax go directly to the city’s general fund, benefiting the city at large.”

The public-private partnership will remain at the center of any future development. “The partnership is alive and well,” Haddad says. “We expect to continue to invest, as does the city, in building out their central core.”

“Virginia Beach would never have developed in the form and shape that it has, nor would it have created the return back to the city with regard to job creation, capital investment, and tax revenue that it has without the partnership with Armada Hoffler,” Harris adds.