Realty Income looks to new markets and a larger shareholder base as it turns 50.

It all started with a single Taco Bell. In 1969, William and Joan Clark founded Realty Income Corp. Their goal: to provide investors with monthly dividends that increase over time.

Take a look at Realty Income’s track record, and you might agree that the Clarks succeeded. In July, the San Diego-based firm declared its 589th consecutive common stock monthly dividend at $0.2265 per share, representing an annualized dividend of $2.718 per share.

“This is our 50th year as a company and our 25th as a public company,” says President and CEO Sumit Roy, who served as COO from 2014 to 2018, as president since 2015, and as CEO since October 2018. “I’m so blessed to have inherited a company that has such a strong foundation and a very clear mission statement of providing shareholders with dependable monthly income that increases over time.”

Realty Income has grown from that initial Taco Bell investment to the nation’s largest net lease REIT, according to Green Street Advisors, with a $19 billion portfolio. According to Realty Income, its total enterprise value stands at approximately $30 billion, with more than 5,900 properties owned under long-term lease agreements with  commercial tenants. Its portfolio consists primarily of retail (83%) and industrial (12%) properties. And its record of consistent dividend increases stands out in the industry.

“Most of the net lease REITs aim to have Realty Income’s track record,” says Todd Stender, a senior equity research analyst at Wells Fargo Securities. “They are the only triple net REIT that I cover that pays a monthly dividend as opposed to quarterly.” 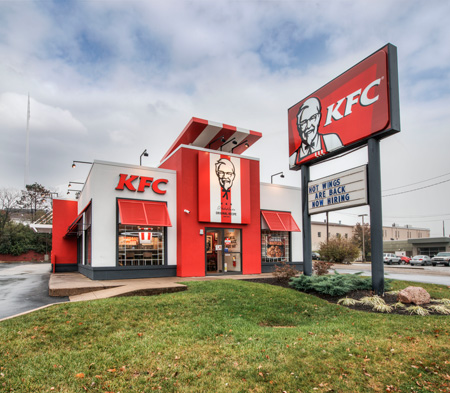 It didn’t take long for Roy to start making changes once he was appointed CEO. He succeeded John Case, who had been in the role for about five years.

“The biggest difference from a strategy perspective is Sumit’s foray into Europe,” says Simon Yarmak, managing director of Stifel Financial Corp. “Up until then, they were all domestic.”

In May, Realty Income announced that it had closed on an acquisition of 12 properties in the U.K. for £429 million under long-term net lease agreements with Sainsbury’s, a grocery operator with more than 1,400 grocery and convenience stores across the U.K. and Ireland.

Roy’s second major change was to increase engagement with investors. “I want to grow the potential investors in our business and tell our story because I feel like it’s a very compelling risk-adjusted return profile,” he says. “By going out there and increasing the number of shareholders, that will accrue to our benefit in terms of keeping our cost of capital at the lowest levels—a major source of our strategic advantage.”

In order to fulfill its mission of dependable dividends, Realty Income has made a “conscious decision,” Roy says, to maintain a portfolio that is recession-resistant. It tries to avoid industries that might be subject to disrupters and seeks to maintain tenant, industry, and geographic diversification in its portfolio.

“All of the industries have common threads—they are a service-oriented business, have a non-discretionary component, or are at a low price point,” he says. “By design, we have reoriented our retail industries and our tenant profiles to fit into one of these three buckets.” 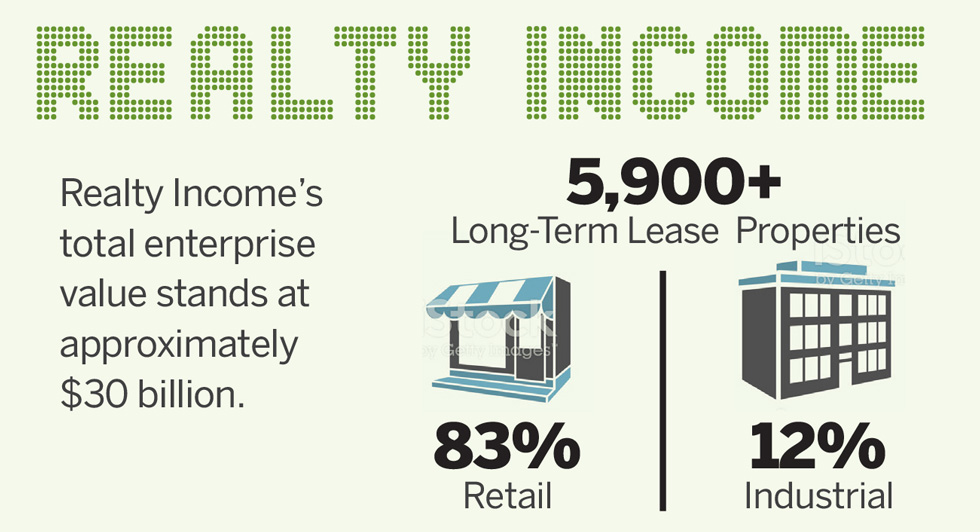 More than 95% of Realty Income’s retail tenants fall into one of these three categories, Roy says, because “they tend to perform far better during economic distress and continue to perform when there is a high level of growth.”

At the end of 2009, only one of the company’s top 15 tenants had an investment grade credit rating, Roy says. Today, approximately half of its revenue is generated by investment grade tenants, according to Green Street Advisors.

A favorite sector is quick-service restaurants. “We love quick-service,” Roy says. “They continued to perform well during the recession because people downshifted, but the casual dining sector suffered tremendously.” That’s why casual dining tenants represented 20% of Realty Income’s portfolio in 2009 and just 3% today.

Another key element of Realty Income’s strategy is securing access to low-cost capital to fund real estate acquisitions that increase earnings. Since its 1994 listing on the NYSE, Realty Income has often tapped the public equity markets. It relies on debt as well and announced in June the pricing of a public offering of $500 million of senior unsecured notes, at a yield of 3.33%, with the funds earmarked for repaying indebtedness under a $3 billion revolving credit facility and funding potential investment opportunities. Realty Income’s size and conservative balance sheet help the firm access capital at a lower cost than its competitors, which not only has offered financial stability throughout various economic cycles but also provided a competitive advantage to the firm—and a wider investment spread.

Roy says that Realty Income will continue to invest, both in additional portfolio acquisitions and in its people. “My focus is to continue to invest in our people and our community and make this a company that continues to perform and where people want to work,” he says. He wants to “continue to grow the company into areas that we may not have explored in the past,” and due to the company’s size, scale, and cost-of-capital advantage, he feels confident that he can do so. 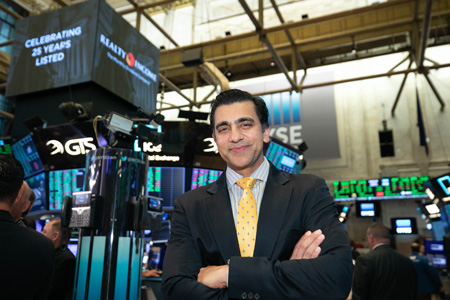 Roy says the firm will “definitely” source additional transactions in the U.K. and will open an office in London headed by Austin DeLana, Realty Income’s associate vice president of acquisitions. “We feel like the market is very deep and can be a source of predictable incremental acquisitions going forward,” Roy says.

Wells Fargo’s Stender expects additional acquisitions in the U.S. in the near term as well. “They’ve been largely priced out of industrial, but there’s so much in retail, and when there are large portfolios out there, the pool of potential buyers gets really small,” he says. “Realty Income has the capital to pull it off and can close within 30 days. They’re big and liquid, so that’s a big differentiator.”

This concept has already been proven effective, most recently through Realty Income’s September 2019 announcement of the acquisition of 454 single-tenant retail properties in a portfolio transaction for approximately $1.25 billion. “We believe this portfolio acquisition demonstrates the importance of size and scale as a competitive advantage in the net lease industry,” Roy states.

Crossing the Pond in Search of Yield 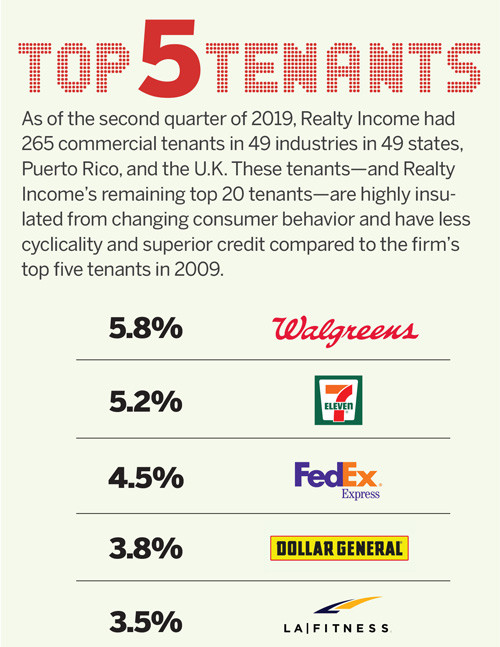 In April, Realty Income announced that it had signed an agreement to acquire, from a joint venture of affiliates of J. Sainsbury PLC and British Land PLC, 12 properties in the U.K. under long-term net lease agreements with leading grocery operator Sainsbury’s. The transaction was the firm’s first international real estate acquisition.

“When we started exploring avenues to invest without compromising the conservative nature of our business model, this was a low hanging fruit for us,” says Roy.

“We liked the geography, we liked the industry, and we liked the operator,” he says. “But the main strategic reason was that we felt like Realty Income was ideally positioned to target a very significant market in the U.K.”

Indeed, Roy estimates that there is $11 trillion of commercial real estate stock in the European market, of which only $3 trillion is owned by professional real estate firms. “The addressable market in Europe is approximately $8 trillion, which is double the size of the addressable market here in the U.S.,” he says. That void creates significant opportunities for a well-capitalized, sizable, and scalable institutional investor like Realty Income.

And, since Sainsbury’s is a grocery store, Roy has no concerns about the outcome of Brexit because, as he says, “people need to eat.”

Spenser Allaway, an analyst on Green Street Advisor’s retail research team, where she leads coverage of net lease, notes that “the investment spread makes a ton of sense, but there are definitely challenges…there’s a steep learning curve when it comes to investing abroad, and overhead is going to grow.” She attributes Realty Income’s year-to-date underperformance of its net lease peers as a reaction to a “tremendous outperformance last year, and you can’t outperform forever.” Another factor has been uncertainty about the company’s move into Europe. “They’re starting a new, more globally diversified platform that needs to be proven out a little bit.”