Climate Change Lessons from the Pandemic

Combating the ever-increasing threat of climate change will require the same kind of adaptations to thinking and policy that were triggered by the onslaught of COVID-19, says Alice Hill, a senior fellow for energy and the environment at the Council on Foreign Relations.

“Now more than ever, we need to imagine the unknown to try to solve for what we cannot predict,” says Hill, who previously served as special assistant to President Obama and senior director for resilience policy on the National Security Council (NSC) staff. During her NSC tenure, Hill led the development of national policy to build resilience to catastrophic risks, including climate change and biological threats.

Hill’s new book is The Fight for Climate After COVID-19. She spoke to REIT magazine on a number of topics including the impact of the pandemic on the climate, the importance of new mindsets and strong leadership, and the need to stop assuming that the future will resemble the past.

How did the world’s reaction to the COVID-19 pandemic impact our climate?

We saw the largest short-term dip in greenhouse gas emissions that we’ve experienced in decades when the world basically shut down and sheltered in place, which definitively confirmed that our current global economy is certainly responsible for a great deal of carbon emissions.

Unfortunately, it wasn’t a lasting dip. In fact, in the end, it’s inconsequential in terms of our battle against global warming.

In recent years when other pandemics surfaced like Ebola, MERS, Zika, and SARS, we were able to get back to normal quickly. What happened differently with COVID-19 and are there other ways it could have been handled?

We were seeing very different responses in different geographical locations when COVID-19 infection rates started soaring in early 2020. One of the things that I conclude in my book is that leadership matters in managing a pandemic. It matters with regards to climate change too.

Strong leadership requires a rapid acceptance of what the science and the modeling is telling you about how events are unfolding, and then adjusting your efforts. It also takes foresight to see how something like COVID-19 could unfold.

Take for example South Korea, a country that had been scarred by SARS and MERS in previous years. When the first cases of COVID emerged, ironically on the very same day they emerged in January of 2020 in the United States, South Korea took it very seriously. They deployed assets immediately with no hesitation. For instance, they quickly started drive-through testing facilities and did extensive contact tracing and have been one of the real success stories in containing outbreaks of COVID. In the U.S., what we saw were previous modeling and planning being abandoned by the administration almost overnight. It rapidly devolved into a very chaotic response.

If we don’t have leadership that is willing to act and build upon work that’s been done in the past to get ourselves prepared for future catastrophes, then we can expect the same chaos in the next event.

I do think the lack of climate literacy has caused people to discount the risk of global warming. There is another factor in place too, which is simply the way the human brain assesses risk, including exponential risk, which is how climate change unfolds.

By this I mean that the risks of climate change grow much, much larger over time. And, unfortunately, our brains are not attuned to accurately assessing a compounding catastrophic risk like climate change. This is because we only assimilate risk by what we’ve experienced in the past. And this kind of thinking has proven that it’s not a good guide when it comes to understanding the future extremes of climate change.

I do think the lack of climate literacy has held up progress in this regard. For example, many of our political leaders only know about climate change from what they have seen or read in the media. Unfortunately, the media has not significantly correlated the types of extreme climate events that we’re seeing to climate change. Even though scientists are now involved in new fields of research like attribution science, which can tell us that an event was exacerbated because of climate change, unfortunately this doesn’t always appear in a lot of media reporting. This includes much of the recent climate-driven weather extremes we’ve all been experiencing.

Another issue is that there is no widespread education available in our colleges and universities on climate change. And if you look at our corporate boards, it’s the same issue. New York University’s Stern School of Business recently did a study of Fortune 100 companies. Of 1,188 directors surveyed, just five had any experience with environmental challenges or climate extremes.

What will be the impact of climate change on commercial real estate development and REITs short and long term?

Climate change will have a significant effect on the real estate market, creating winners and losers. Commercial real estate in coastal areas may decrease in value as chronic, sunny-day flooding undermines local economies and businesses.

Insurance in wildfire-prone areas may become unaffordable as the risks increase.  Buildings that lack air conditioning will become less desirable as heat waves become hotter and longer. Owners will discover that structures were not designed or built to withstand the extremes that the nation is already experiencing, much less those in the future, since building codes and land use practices do not yet routinely account for climate-worsened extremes.  A great deal of development currently exists and continues to occur in areas that are destined to burn and/or flood, and are vulnerable to heat.

What can governments, universities, businesses, communities, NGOs, philanthropies, and individuals do to avoid, or at least prepare for climate-fueled extreme events?

It will take a global community-wide effort and that consists of public and private organizations being driven to taking actions to reduce risks immediately. This could be by making major investments in building seawalls or by rebuilding natural infrastructure like wetlands so that they can absorb storm surges. We should also avoid developing areas that are at a high risk of getting caught up in wildfires or flooding.

You talk about closing the gap between mitigation, resilience, and adaptation. Can you expand on these concepts as they relate to climate change?

Mitigation is typically used to describe the cutting of harmful greenhouse gas emissions.

Notably, there are some technological efforts happening to remove some of these emissions that have already accumulated through carbon capture and storage and other technologies. 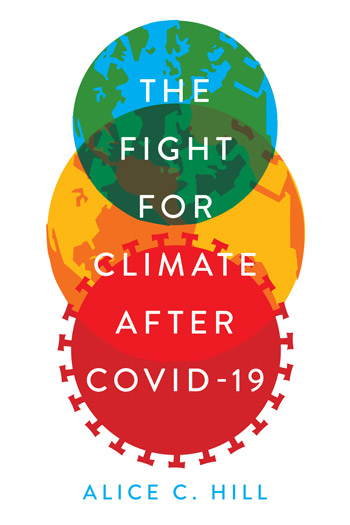 Resilience is a broader term that’s exploded in usage lately when discussing climate change. Resilience is about communities being able to absorb, withstand, recover, and ultimately adapt from climate impacts. Adaptation is taking specific steps to reduce climate impacts. So, resilience, adaptation, and mitigation of risk are used somewhat interchangeably when talking about climate change.

You’ve said that nations can no longer rely on the past as a safe guide to the future when it comes to climate change, but rather they need to imagine the unknown. What do you mean by that?

It is particularly critical in climate change to imagine the unknown. And that’s because climate change brings extremes that do not resemble anything in recorded history.

Take the very aptly named “Death Valley” desert in California. In the last two years, Death Valley has reached temperatures of 130 degrees Fahrenheit. Those are the highest temperature readings ever reliably recorded in the world. And it’s happened in back-to-back years. It tells you our temperatures are rising dramatically. In Siberia, we’ve seen 100 degrees Fahrenheit. We’re seeing wildfires that have destroyed more land than historically has ever occurred.

This is just the beginning of climate events like these. It will worsen over time. We’ll see higher amounts of precipitation. We experienced 30 named tropical storms last year in the Atlantic basin and those were the largest storms. Meteorologists had to turn to the Greek alphabet to continue naming them. So, if we continue to assume that our future resembles the past, then we are planning for something that no longer exists. Now more than ever, we need to imagine the unknown to try to solve for what we cannot predict.

Can you give us an example of how climate change impacts human migration patterns?

What’s happening on our Southern border right now with migration is partly driven by climate change. It’s not the sole cause, but climate change is a threat multiplier. For instance, if you have food insecurity, it makes it worse. If you have violence, it exacerbates the problem.

Last year, Honduras experienced two back-to-back category four hurricanes within the space of two weeks that devastated their economy, flooded towns and cities, killed people and left others homeless. Honduras is a country that has historically been plagued by violence too. All these things add up to more people migrating North.

QWhat can we do at an individual level to reach some lasting transformational change globally?

Polling shows that few Americans are truly aware of climate change. We’ve just been through a situation with the pandemic which exposed how truly at risk we are to challenges posed by climate change. This should be a topic of conversation for every one of us every day. We should be learning more and engaging in conversations frequently.

Hopefully, family and neighborhood conversations will lead to more political activity designed to address and reduce the threats of climate change. It’s imperative that we ask our elected leaders what their plans are for addressing climate change in order to make a difference now.

Individually, we should seek to reduce our emissions by flying less and hopefully driving less. We should look to more sustainable, locally sourced food, services, and goods.  But even if we do this, it’s unfortunately not going to solve the crisis that we have now. We need to get abatement programs in place through government action and implement real and lasting ways of reducing emissions. Utilities and governments need to work together on increasing water and sewage drainage capacity within our cities, reducing heat islands in our cities, and planting mass stands of trees and greenery. This needs to happen now.