COPT’s longtime partnership with the University of Maryland, College Park is helping to turn a great college town into a center of innovation. 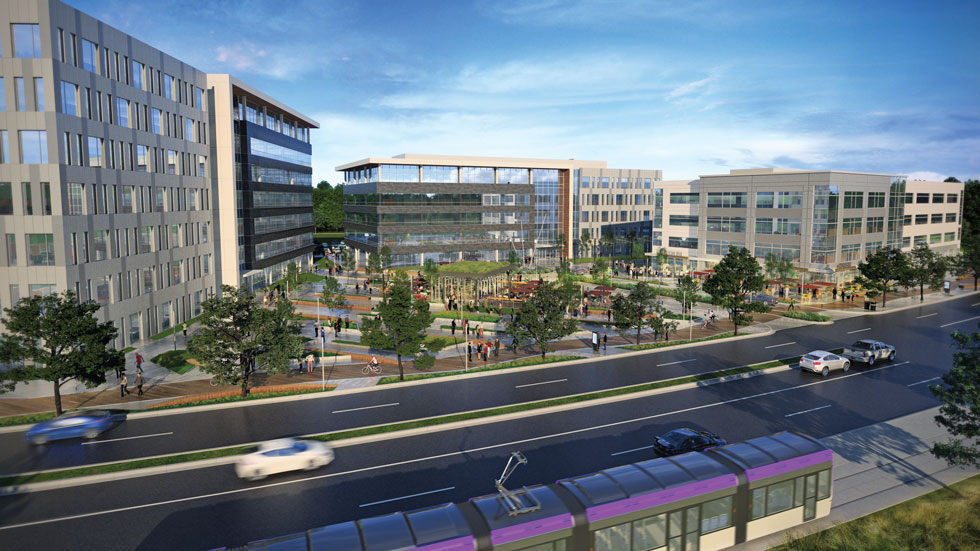 Encompassing over 150 acres, the Discovery District in College Park, Maryland, embodies a long-running effort by the University of Maryland (UMD) to leverage its strength as a research institution by creating a vibrant and diversified mixed-use community built on innovation.  As UMD’s largest private industry partner, Corporate Office Properties Trust (COPT) (NYSE: OFC) is fulfilling its role by developing mission critical office properties on roughly 60 acres.

Already home to dozens of research institutions, federal agency laboratories, technology companies, and other tenants in some 1.5 million square feet of real estate, the Discovery District is becoming an attractive destination for cutting-edge startup companies and expanding firms that want or need to locate along the influential Baltimore-Washington, D.C. corridor.

COPT, an office REIT based in Columbia, Maryland, recently completed construction of the 100,000-square-foot 4600 River Road, its fourth office property in the Discovery District.

All told, COPT has developed about 425,000 square feet of precast and glass office buildings in the Discovery District representing an investment of $97.6 million, and momentum is building.

“We’ve really seen an acceleration in activity in the Discovery District over the last few years as we’ve opened two new buildings and have had a lot of leasing success,” says Dean Lopez, senior vice president of development for COPT. “We have a very synergistic relationship with the university, and it aligns very well with our core mission as a company.”

In anticipation of seeing its workforce grow to 228 employees from 100, cybersecurity firm Cybrary is moving from the REIT’s 5801 Research University Research Court building in College Park and expanding into a 28,000-square-foot headquarters space at 4600 River Road.

The REIT’s latest round of development started in 2018. While three of its assets at Discovery District are fully occupied, the newest building is more than 50% spoken for and leases being negotiated will fill the balance, Lopez says. COPT’s first two buildings were each certified LEED Silver, and its third building achieved a LEED Gold certification. LEED Gold certification for its latest property is pending.

The company has room to develop nearly 1 million square feet of additional space, and executives see the Discovery District as an important part of its strategy to invest in locations that are anchored by, or are in proximity to, mission-critical, knowledge-based government agencies, defense and security companies, and information technology installations and institutions.

“As a science-oriented research and development community, the Discovery District appeals to defense tenants executing work in an academic environment and the talent they seek to recruit,” Lopez says. “The proximity of our office park to retail, restaurants, housing, hotel accomodation, and the university supports a live-learn-work-play—and recruit—ecosystem.”

The Discovery District was formally launched in early 2017 and is bordered roughly by Baltimore Avenue, UMD, the Anacostia River, and Maryland 410 highway. It represents a rebranding of M Square, the former name of the UMD-affiliated research park southeast of campus that began to take shape in the 1990s.

After M Square was officially established in 2006, COPT partnered with the university to bring together academic, government, and private resources to attract organizations focused on the environment, food safety, national security, technology, and other front-line sectors.

The venture aimed to build on the presence of a host of science and research-oriented firms, including the American Center for Physics, the U.S. Department of Agriculture Animal and Plant Inspection Services, the Food and Drug Administration’s Center for Food Safety and Applied Nutrition, and the National Oceanic and Atmospheric Administration’s Center for Weather and Climate Prediction, all of which are still operating in the park today.

While the effort had some success, it became clear that the research park initiative needed to broaden its scope and include amenities that would boost the area’s appeal. Too many alums and former students launching startups were leaving the area, says Ken Ulman, chief strategy officer of economic development for the University of Maryland College Park Foundation, a non-profit organized in 2000 to receive, invest in, and manage assets that support the university.

Wallace Loh, UMD’s president from 2010 to 2020, considered M Square a “20th Century Park.” He made it a priority to bring it up to date by encouraging a broader range of development to support the area. As a result, the Discovery District was born and became the focal point of a town/gown initiative to build a “Greater College Park,” spearheaded by the university, the city of College Park, and Maryland’s Prince George’s County.

“Greater College Park is an effort to create housing, grocery stores, coffee shops, hotels, restaurants, and music venues—all the amenities that make for great college towns and great places of innovation,” explains Ulman, who is also president of strategic consulting firm Margrave Strategies. “It’s a place for companies that grow out of the university’s labs, and it’s a place where those from outside the region will want to locate.”

Dave Baggett, a UMD alum and founder of Inky, brought his company to the Discovery District about three years ago from Rockville, Maryland. He formerly served on the UMD College Park Foundation and has watched the Greater College Park blueprint come to life.

“The plan for this area has really advanced over the last decade,” Baggett says. “It has been quite cool to see it evolve into a tech hub.”

UMD’s decision to expand its development scope is a story that’s being repeated throughout the world, says Brian Darmody, CEO of the Association of University Research Parks (AURP) based in Tucson, Arizona.

For years many such parks operated in sterile, siloed environments, Darmody says. But the thinking gradually changed, particularly as universities increased their affiliation with the settings.

“Originally, people wanted the research and science to be pure and unencumbered by distraction, but they realized that that wasn’t a very smart strategy,” says Darmody, a former associate vice president for UMD corporate and foundation relations. “The trend now is to create a live, work, play environment with universities, whether that’s housing, retail, childcare, or other amenities.” In fact, in 2019, when Darmody became CEO of AURP, he established a second headquarters in the Discovery District.

Among its primary goals, the Greater College Park plan envisions leveraging the Discovery District to enhance the appeal of Baltimore Avenue, a major connector of Washington and Baltimore, by removing blight and outdated uses, Ulman says.

Completed projects in and around the Discovery District include the $180 million, 297-room Hotel at UMD, developed by Southern Management, as well as the $250 million Station at Riverdale Park, a residential and Whole Foods-anchored retail project developed by Calvin Cafritz Enterprises.

Additionally, Gilbane Development and the Washington Metropolitan Area Transit Authority have partnered to build an apartment building, a townhome, loft, and retail project on a surface parking lot adjacent to the College Park metro station, which is just a few minutes’ walk to COPT’s buildings.

“All of these projects are starting to work together and congeal into a real community,” Lopez says. “That’s what has been most exciting for us.”

What’s more, Maryland’s transit authority is building a $5.8 billion, 16.2-mile line, which will run from Montgomery to Prince George counties and add five stations in the College Park area—two in the Discovery District and three on UMD’s campus. Known as the purple line, the oft-delayed project is expected to open in 2023.

Those connections are buttressing a destination that already is readily accessible. “When we decided to move from Rockville to College Park, I was pleasantly surprised by how excellent the Discovery District location is for commuters,” Baggett recalls. “It’s much more feasible to hire people from all around the region.”

Because of UMD’s preeminent program in cybersecurity education, training, and research, the Discovery District is an ideal location for tenants oriented toward defense and cyber activities in an academic setting.

UMD also facilitated the construction of an automobile, pedestrian, and bike bridge over railroad tracks that connects the Discovery District to the Station at Riverdale Park about a mile away, Darmody says. Like Campus Drive, which was extended south under rail lines when the metro station opened in the 1990s, he adds, the link has bolstered continuity in the community, improving access to nearby shopping and restaurants, neighborhoods, and parks and recreation trails.

“One of the district’s greatest attributes is that we have phenomenal multimodal access, which is appealing to office users,” observes Lopez. “Another game changer has been the Riverdale mixed-use development and bridge. They have helped the district in a very positive way.”

In addition to Brandywine’s plan to build offices, UMD and other developers have created incubator and flex office space. That includes the Maryland’s first WeWork location, which opened on the UMD campus in late 2018. But many of those spaces are tailored toward companies just launching, Ulman says, while COPT’s buildings provide more flexibility to rapidly growing startups and more mature firms.

Plus, tenants tied to national defense and intelligence (COPT’s targeted customers) often demand the type of highly secure and specialized settings that are in COPT’s wheelhouse. That includes “sensitive compartmented information facility” (SCIF) spaces, which are restricted-access rooms or buildings constructed to guard against electronic surveillance and suppress data leakage. COPT can also provide data center space as well as space that is compliant with U.S. Department of Defense Anti-Terrorism/Force Protection security standards.

“There are different product types for what companies will need at different points in time,” Ulman adds. “But COPT’s strength is understanding the needs of the defense industry. Very few developers have that comprehension and expertise.”

Given the types of companies gravitating to the Discovery District, as well as to Maryland in general, the REIT appears to be well situated to foster growth not only at UMD, but also in nearby communities where it owns properties.

Combined, UMD and its sister school in Baltimore tallied research expenditures of $1.1 billion in fiscal year 2019, which ranked the pair at No. 8 for expenditures among public institutions in the U.S., according to the National Science Foundation’s Higher Education Research and Development Survey. Along with the Discovery District’s existing tenant base and proximity to Washington and federal agencies, the notoriety is fueling startups spinning out of UMD and is attracting outside firms. That’s especially true in the rapidly growing cybersecurity sector.

“What’s particularly unique about the Discovery District and the university is that growing cybersecurity companies have been proliferating along the Baltimore-Washington corridor, especially since U.S. Cyber Command was established at nearby Fort Meade in 2010,” Lopez says. “Because the University of Maryland has a preeminent program in cybersecurity education, training and research, the Discovery District is an ideal location for tenants oriented toward defense and cyber activities in an academic setting.”

In short, the success of the Discovery District over the last few years is begetting more success, Baggett says.

“Tech communities need a critical mass, and more tech and software companies now consider the Discovery District as a viable location,” he explains. “There are a bunch of startups like us there now, and the more of those that you can get that are receiving B and C (venture capital investment) rounds to fund growth, the more critical mass you can achieve.”