If there has been any theme to the economic recovery over the past eight years, it has been “two steps forward, one step back,” and the first quarter is one of those steps back. The medium-term outlook for both the macroeconomy and for real estate and REITs, however, remains positive.

Throughout the first quarter of 2017, media headlines contained several reports of economic weakness. Reports highlighted that GDP growth slowed sharply to 0.7%, the weakest in three years. Job growth stumbled as well, with nonfarm payroll employment rising an average 175,000 per month from January through March, well below the 220,000 monthly average over the prior three years.

Real estate markets were not immune to this weakness in macro fundamentals. According to CoStar, demand for commercial real estate slowed in the first quarter for all major property types except multifamily. Together with the new supply coming on the market, the soft demand caused vacancies to edge up (see chart below). Rent growth slowed as well. 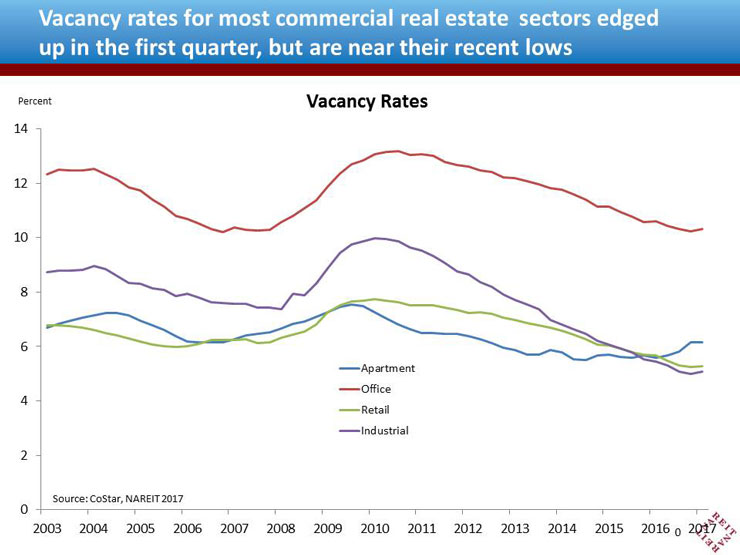 If there has been any theme to the economic recovery over the past eight years, it has been “two steps forward, one step back.” More important is that the move following the “step back” is generally forward again. For example, first quarter GDP growth was one percentage point below the trend over the prior two years. Since 1980, shortfalls of this magnitude or greater have occurred more than 30% of the time. Growth rebounded to an above-trend pace in the subsequent quarter, however, nearly half the times when this occurred. Real estate markets show a similar pattern. According to data from CoStar, the quarterly growth of demand for office, retail, industrial and multifamily properties fell by 25% or more nearly one-fourth of the periods since 1980. Demand rebounded in the subsequent period two-thirds of the time, however, and often rose back above the preceding quarter’s peak.

Keeping in mind how often these short-term fluctuations occur, the medium-term outlook for the macroeconomy, real estate and REITs remains positive. That’s because economic expansions don’t die of old age, they end if they overheat, are overbuilt or overleveraged. None of these terminal conditions, however, is present today.

Let’s look in turn at the macro fundamentals, conditions in commercial real estate markets and the latest performance data on REITs.

Warning signs, which include markets being overbuilt, overheated and overleveraged, are not present in the macroeconomy. The below provides an in-depth look at each of the warning signs:

Overbuilt? No. An overbuilt economy displays elevated cyclical components of GDP, including consumer spending on durable goods like autos, furniture and appliances, as well as construction of both residential and commercial real estate, and business investment. In the first quarter of this year, however, cyclical GDP was 24.1% of total GDP, some 1.5 percentage points below its long-run average (see chart below) 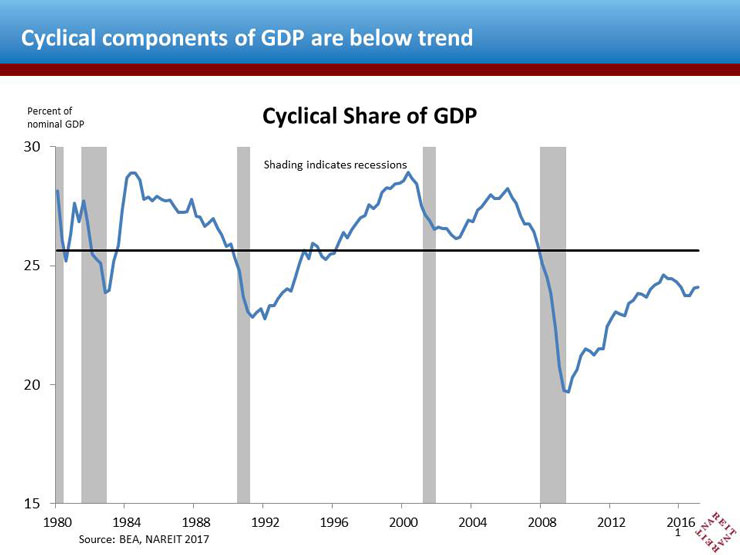 This is not a picture of an economy that is overbuilt.

Overheated? No. Rapidly rising wages and prices can signal an overheating economy, which in past cycles typically prompted the Federal Reserve to seek to slow it down. Inflation, however, is still running at or below the Fed’s 2% target, with core inflation (as measured by the core personal consumption expenditures deflator, which strips out the volatile food and energy components) up 1.6% over the past year.

It is worth noting that the Federal Reserve has begun moving short-term interest rates higher. Fed officials have stressed, though, they are not trying to slow the economy, but rather “taking the foot off the accelerator” as the economy approaches its potential. Indeed, moving monetary policy from a stimulative stance to a more neutral one is designed to help prevent any overheating in the medium-term future.

Overleveraged? No.  Over the past eight years, most sectors of the U.S. economy have deleveraged and paid down debt. The Fed’s Financial Obligations Ratio (a version of the debt burden that accounts for consumer leases) shows debt payments at 15.4% of disposable income in 2016 Q4. This is down from a peak at greater than 18% on the cusp of the financial crisis, and is at its lowest level since 1981. Banks have reduced leverage and raised their capital ratios as well, with an average core capital ratio of 9.5% in the fourth quarter, according to the FDIC, compared to a core capital ratio of 8.0% in 2007.

Commercial real estate markets are not displaying late-cycle indicators, either:

Overbuilt? No. No. Construction has ramped steadily upwards over the past six years from the trough reached in early 2011. This mainly reflects how much activity had slowed during the crisis. A longer perspective shows that construction activity, measured as a percentage of GDP, is still below the long-run average from 1993 to 2008. Furthermore, construction only recently rose above the lowest point it had reached during the prior two decades (see chart below). 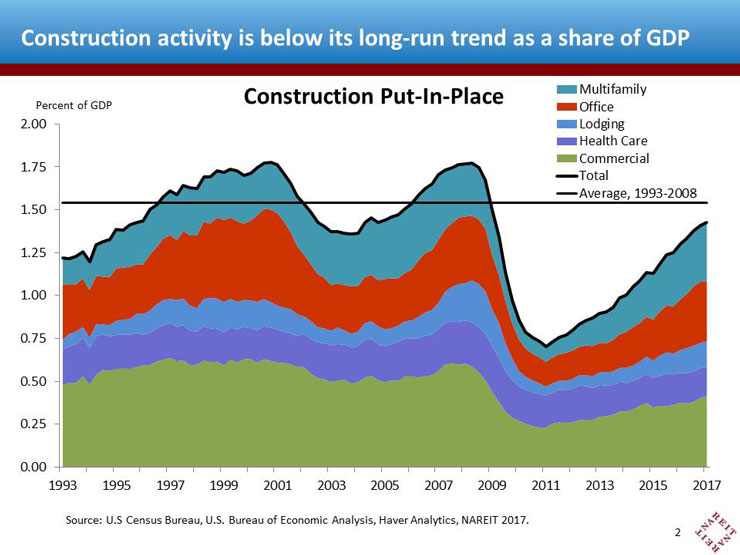 Overheated? No. Price increases in commercial real estate are unsustainable if they continually exceed the growth of net operating income (NOI). A sustainable trend is when periods of rapid increases are followed by slowing back to, or below, the growth of NOI. Such a slowing is in fact underway in 2017. Commercial property prices rose at a double-digit pace from 2010 through the middle of 2016, and are 18% above the pre-crisis peak, according to CoStar’s Commercial Repeat Sales Index (see chart below). Price growth has flattened out so far in 2017. As long as the macroeconomy remains sound and contributes to rising rents and NOI, a slowing like this is a healthy development. 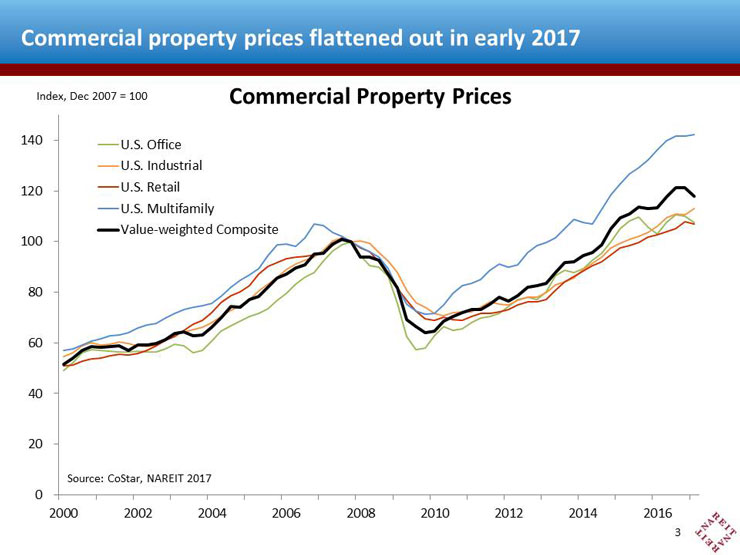 Rising property prices have, however, pushed cap rates to low levels, and they would have moved lower still had there not been steady NOI growth. These low cap rates should not be surprising in a low-yield environment. The spread between cap rates and the yield on Treasury securities is wider than it had been during the entire prior decade, even with the recent back-up in interest rates (see chart below). This spread represents the return over risk-free rates that investors receive for their positions in commercial real estate. Unlike the razor-thin margins experienced during 2006-2007, current cap rate spreads include an ample cushion for commercial real estate prices. 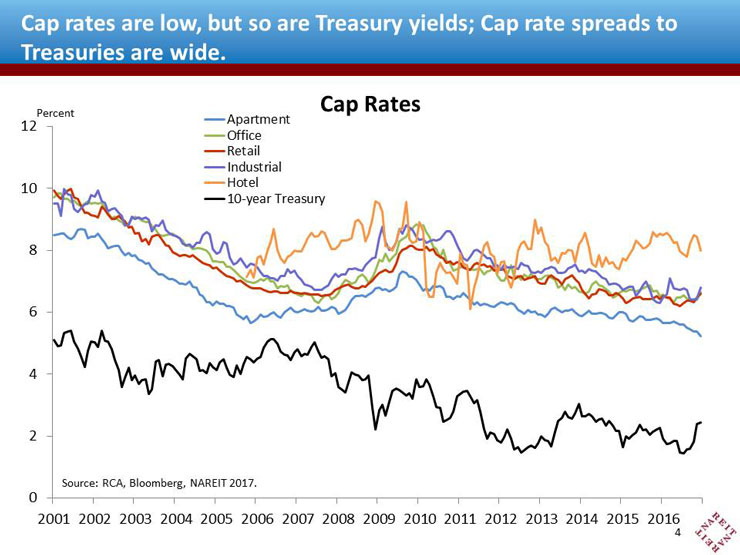 Overleveraged? No. Lenders have been cautious about exposures to real estate, and the growth of commercial mortgage debt has been subdued. Bank lending has been restrained, and the CMBS market has been focused on refinancing the wall of maturities of loans originated a decade ago. As a result, according to the Fed’s Financial Accounts of the United States , the growth of total commercial mortgage debt outstanding has leveled off at around 5% annually, one-third the rate of growth witnessed during the past two business cycles (see chart below). 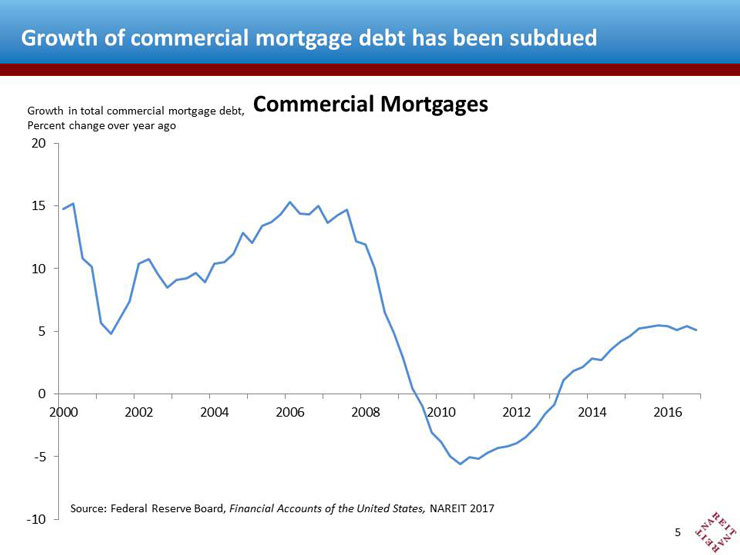 The latest data on operating performance of REITs from the NAREIT T-Tracker® reflect the slowing in the rest of the economy in the first quarter of 2017, as evidenced by 3.9% decline in funds from operations (FFO) (see chart below). The slowing was concentrated in a few sectors, including Retail, Diversified, Self-storage and Data Centers. FFO in other sectors, in contrast, increased in the first quarter. Like the overall economy, however, the decline in total FFO represents one step backward after several steps forward in recent quarters, and total FFO was 8.1% higher than it had been one year earlier. 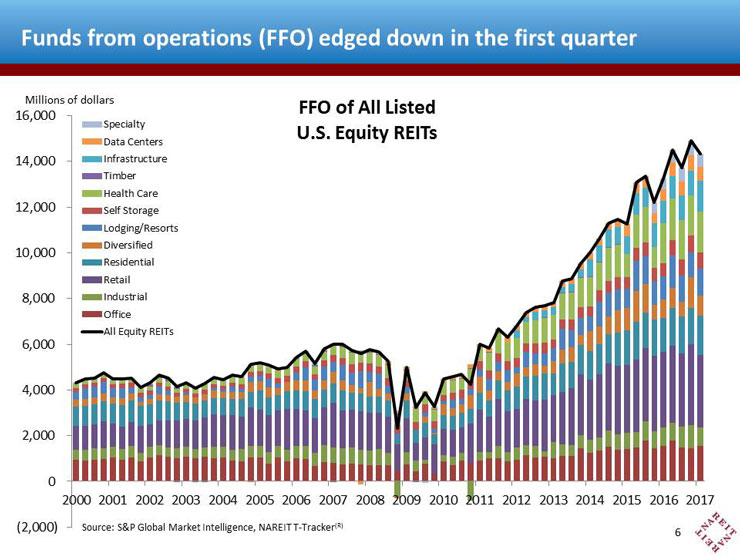 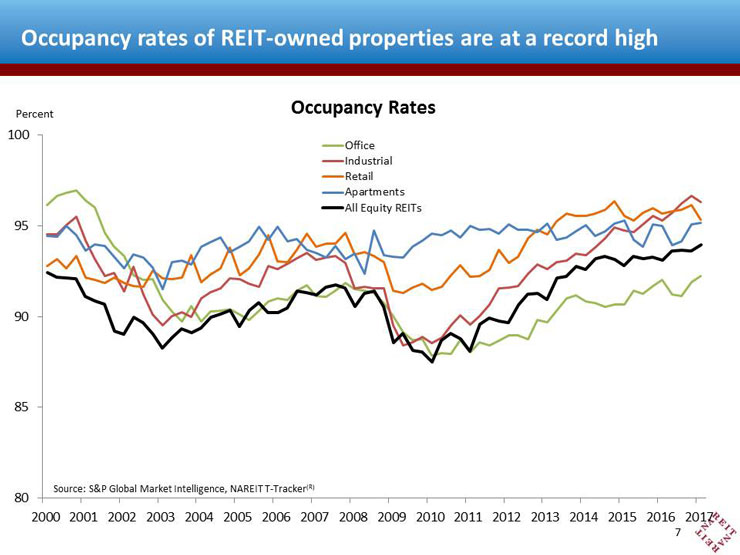 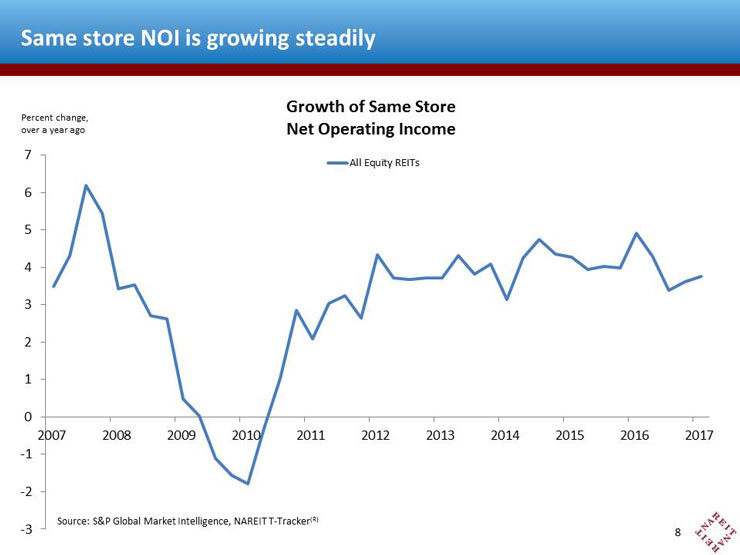 Economic activity rarely proceeds in a straight line, and it is common for growth to fluctuate above and below trend through a long cycle. Indeed, the employment report for April showed a rebound, with an increase of 211,000 jobs, suggesting that a recovery from the soft first quarter may already be underway.

The commercial real estate sector has experienced a five-year period where growth of demand exceeded new construction quarter after quarter, often by a significant amount. In the first quarter, demand and supply were roughly balanced. This may feel soft following a long run where demand consistently outpaced supply. But with few signs that the economy is overbuilt and with the economic fundamentals for real estate still solid, the outlook for REITs and real estate is positive.