The percentage of American households with REIT stocks has also nearly doubled from 23% to 44% through the last two decades.

This research estimates the number of Americans and American households that own REIT stocks annually over the period 2001 to 2019. Roughly 65 million Americans owned REIT shares in 2001, this more than doubled to nearly 145 million Americans that owned REIT shares in 2019. The percentage of American households with REIT stocks has also nearly doubled from 23% to 44% through the last two decades. Table 1 and Charts 1 and 2 summarize the findings of the analysis. 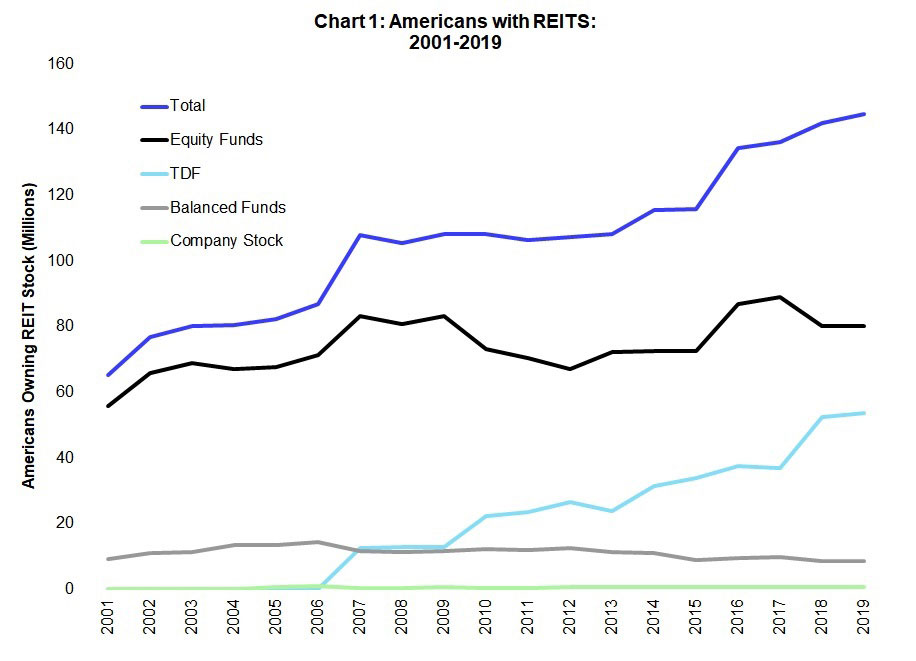 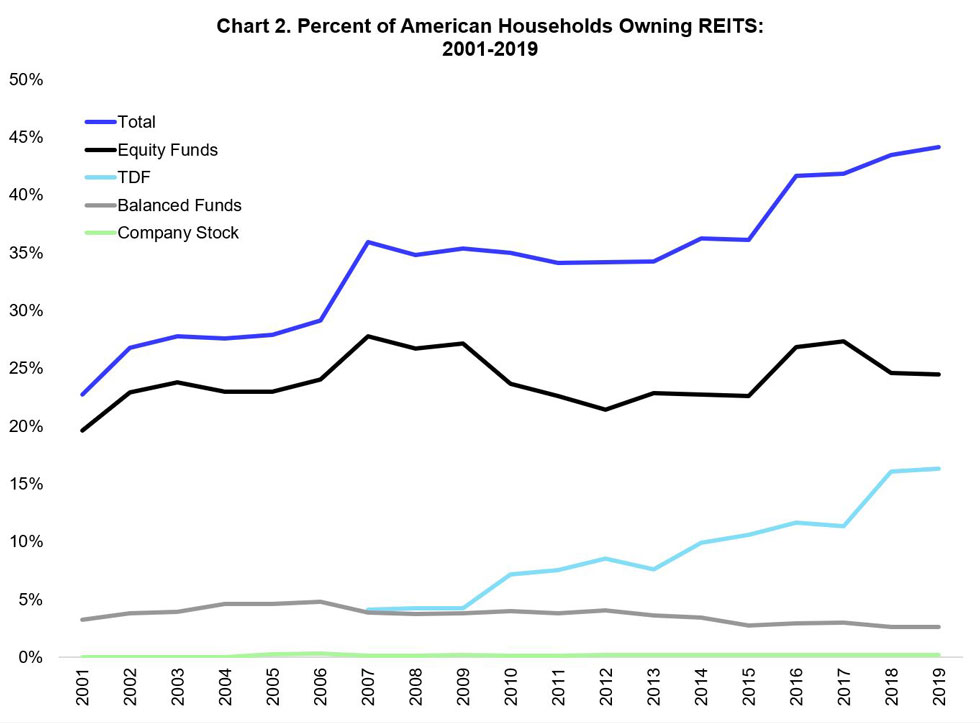 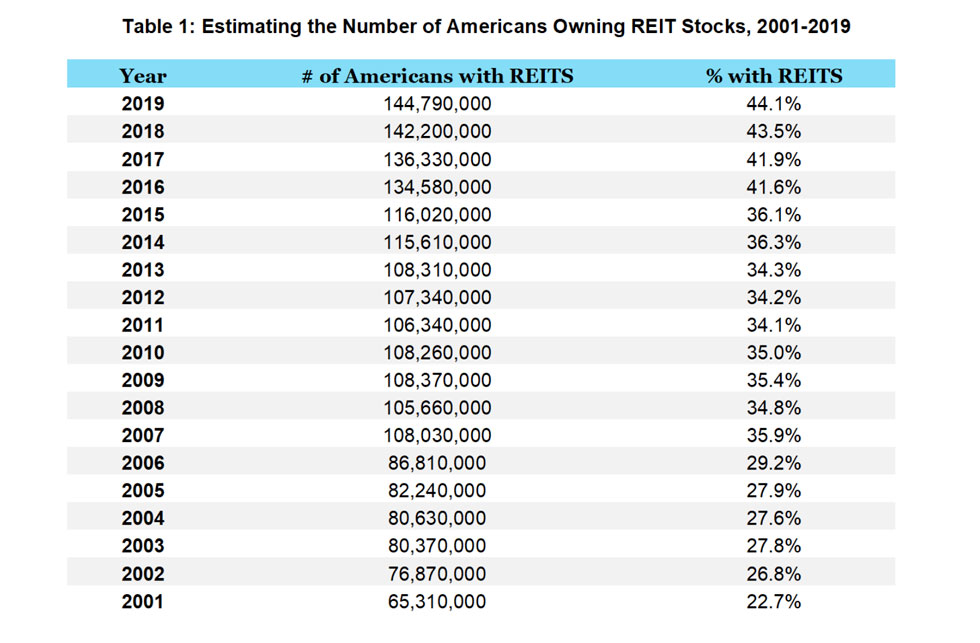 The main reasons for the increase in American-owned REIT stocks since 2001 include:

REIT exposure in equity funds has increased nearly 30 percentage points since 2001, while household exposure to these funds has remained constant.1 Significant use of target date funds (TDFs) began in 2007, and these funds include moderate REIT exposure. TDFs have had significant increases in exposure within 401(k) plans, improving from 7.6% in 2007 to 23.5% in 2019.2 Nearly 80% of TDFs have some REIT exposure in 2007; this has increased to just under 100% in 2019. The total number of American households has also increased from 105 million in 2001 to 129 million in 2019,3 providing REIT stocks with a larger base. 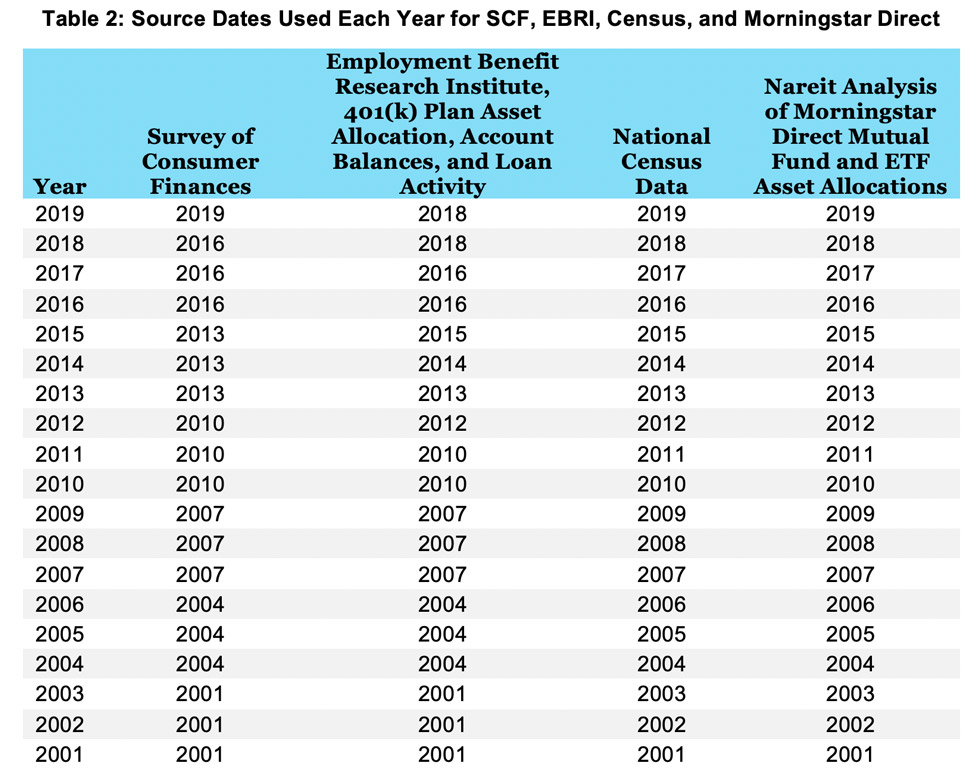 The SCF reports in 2019 that 52.7% of households have equity exposures,4 down slightly from 2001 (53.0%).5 The most common type of equity exposure includes ownership through a tax deferred retirement account (direct stock, direct holding of pooled investment funds, and other managed assets). The predominance of tax deferred retirement account based ownership will be used below as a key assumption. 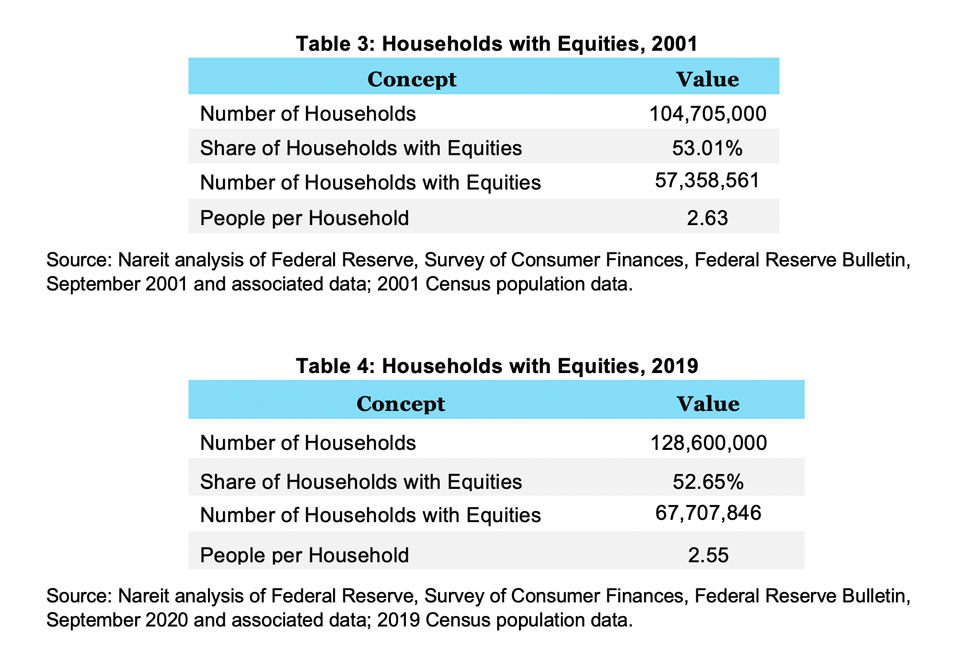 As noted above, the dominant form of stock ownership is through a tax deferred retirement account, most typically through an employer sponsored 401(k) plan. EBRI estimates the average asset allocation in 401(k) accounts.6 EBRI divides equity ownership vehicles into four categories, which are treated as mutually exclusive by EBRI and for this analysis. The four categories are equity funds, target date funds, balanced funds, and company stock. These shares are shown in row (1) of Tables 4 and 5. 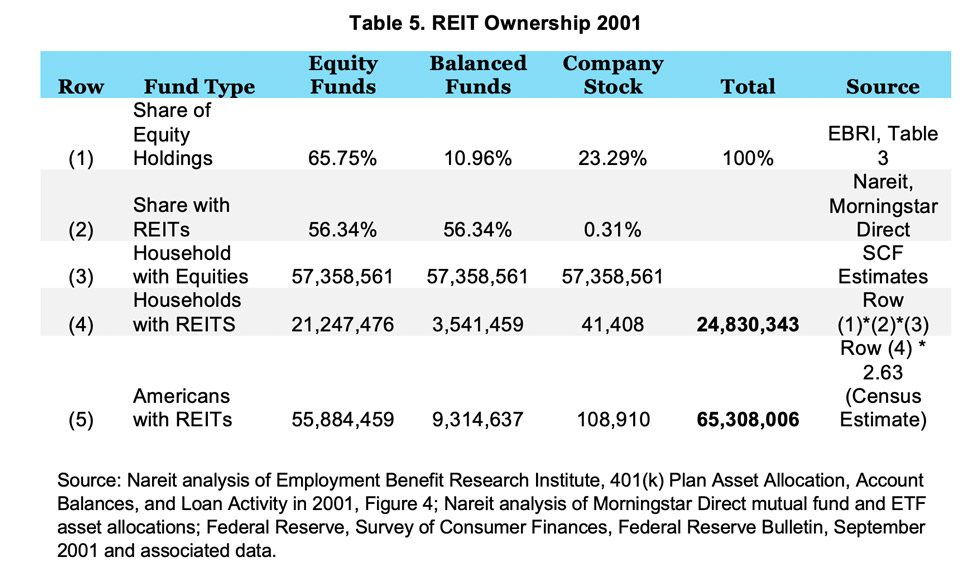 The primary causes for increased REIT ownership within households were the increased shares of REIT exposure in equity and target date funds. To demonstrate this, consider the following counterfactual. If we apply the equity fund REIT exposures from 2019 to equity ownership in 2001, the share of households with REITs increased from 22.7% to 33.7%. Since the share of households with equities only increased slightly from 52.7% in 2001 to 53.0% in 2019, the 10 percentage point increase in REIT household ownership is mostly a direct effect of the large increase in REIT exposure within equity funds (56.3% in 2001 to 88.3% in 2019). Similarly, applying the 2019 TDFs REIT exposures to the 2007 data, result in the share of households with REITs increasing from 35.9% to 37.1%. When applying both shares (equity and TDF REIT exposure from 2019) to the 2007 data, REIT household ownership increased from 35.9% to 40.7%. This explains nearly 60% of the change in household REIT ownership from 2007 to 2019. The other 40% of change mainly rises from the increased prevalence of TDFs in retirement accounts. TDF shares of equity holdings rose 21 percentage points from 2007 to 2019, while equity fund holdings fell off roughly 12.5 percentage points. These changes helped increase REIT ownership because on average there is more REIT exposure in TDFs than in equity funds. When applying the 2019 shares of equity holdings to the 2007 data for equity funds and TDFs, REIT household ownership increased from 35.9% to 39.5%