Piedmont Well-Positioned for Office Demand in the Post-COVID Era

Piedmont says it is well-positioned for office demand in the post-COVID era, with easily accessible locations that have ample structured parking and are less dependent on mass transit.

At the time of its IPO, the Atlanta-based REIT had a portfolio of 83 highly diverse office buildings scattered across 23 states. Today, Piedmont owns just 23 of those initial properties, along with 35 more recently purchased properties in a portfolio that spans only seven major U.S. office markets.

President and CEO Brent Smith, who succeeded former CEO Donald Miller upon his retirement in June 2019, has worked for, or as an advisor to, Piedmont for the past 13 years and has been instrumental in shaping its strategic direction and transformation.

Piedmont’s $200 million IPO in 2010 was “the catalyst needed to streamline our portfolio,” Smith says. “We realized we would need to tighten our footprint, but we faced a challenging and imminent expiration schedule.” With 40% of the company’s leases due to expire between 2011 and 2013, retention of tenants and leasing activity took priority immediately after the IPO.

“Our property and asset management teams worked tirelessly to renew nearly 150 leases, and they really answered the bell,” he says. “The experience laid the groundwork for the excellent retention and corporate relationships we enjoy with our tenants today.”

In 2014, Piedmont’s leasing efforts over the previous three years began to pay off in the form of improving funds from operations (FFO) growth, followed by growth in cash net operating income (NOI), and increasing occupancy. These results, and an improving economy, paved the way for repositioning via capital market transactions.

“That’s when we set out to concentrate in the specific markets and submarkets where we are a leading office provider today,” Smith says. Macroeconomic selection criteria narrowed potential markets to those with a diverse industry base, a favorable business climate, and attractive long-term growth fundamentals. Atlanta, Boston, Dallas, Minneapolis, New York City, Orlando, and Washington, D.C. were chosen as targets. More specifically, submarkets within each city were selected for their strong amenity base, convenient access to transportation, infrastructure, and appeal to corporate tenants, as well as their proximity to executive and workforce housing.

The company sold four assets in non-core markets in 2014 and purchased two class-A office properties, one in Boston and one in Atlanta. Piedmont’s carefully planned transformation was starting to take shape.

Smith describes the acquisition strategy, still in use at Piedmont today, as one of targeting acquisitions of existing high quality buildings at meaningful discounts to replacement cost, in which Piedmont can enhance value through repositioning and/or re-tenanting.

“With approximately 90% occupancy today, we manage all redevelopment projects from start to finish and use third-party construction professionals to maintain an efficient, low-cost model. These enhancements not only improve our portfolio, they generate new opportunities to expand while ensuring we meet the needs of growing businesses,” he says.

By 2017, Piedmont had recycled $2 billion of assets to enhance and refine the portfolio and strengthen market positions. But analysts seemed unconvinced. “It was difficult, because Wall Street’s time horizon was focused on the next two to three quarters, instead of two to three years,” Smith says. “We were laying the groundwork for our future, and it was tough for people to get enthusiastic about the transition until it was closer to completion.”

During that period, Piedmont deployed its stock buyback program more than once, purchasing shares at an average price in the low $17 per share range that would later be traded at more than $24 per share in early 2020. “It’s almost as if we had to shrink to grow, to continue doing what was right by the real estate,” Smith says. “When our own stock was our best investment alternative, we took advantage of it—and we’ve been rewarded for that.”

David Rodgers, senior analyst at Robert W. Baird, says that the office industry in general failed to gain much traction early in the recovery, and Piedmont faced even greater challenges with secondary market exposures. “However, as the economy improved and the company successfully navigated the lease-up of its portfolio, investment sales activity accelerated, and the repositioning of the asset base became more apparent to investors.”

The turning point for investor awareness seems to have come in January 2018 with the sale of 14 non-core properties to two buyers for a total of $430 million. The dispositions completed the REIT’s exit from four office markets and refined holdings in four of its core markets.

“We knew we had reached the point in the real estate cycle where many property valuations were near full pricing levels,” Smith says. “It was an opportune time to monetize the value on certain non-core assets and sharpen the footprint of our portfolio.” Piedmont used the proceeds to repurchase 15 million shares of common stock, to help repay $470 million of term loans before they matured, and to help acquire properties in target markets.

The Road from Here

Piedmont is proud of its momentum and excited about where it is headed. In 2019, lease renewal spreads for the company’s entire portfolio increased nearly 10% on a cash basis and more than 20% on an accrual basis. Same-store NOI growth was up nearly 6%, in keeping with a historical trend of 5% to 10% per year. Before the onset of uncertainty related to COVID-19, FFO growth had been projected at 6% to 12% for 2020, reflecting recent leasing activity.

Acquisition of the Galleria Office Towers in Dallas this past February was seen as an important strategic fit for the portfolio. Purchased for approximately $400 million, the property includes three class-A office towers totaling 1.4 million square feet and an adjacent developable land parcel acquired at an almost 40% discount to replacement cost. The towers are 90% to 100% leased to tenants that include Amazon, Ryan, LLC, and Kimley-Horn. In-place rents average 25% below current market rates, providing a meaningful upside through releasing.

Michael Lewis, analyst and managing director of REIT equity research at SunTrust Robinson Humphrey, Inc., says SunTrust is still projecting 8% year-over-year FFO-per-share growth in 2020, largely driven by the acquisition of the Galleria Office Towers. “A very positive imbedded rent mark-to-market across the portfolio heading into the current downturn should provide some cushion, while having 37% suburban exposure could fit a ‘hub-and-spoke’ office footprint for tenants perhaps considering that model post COVID-19,” he adds. 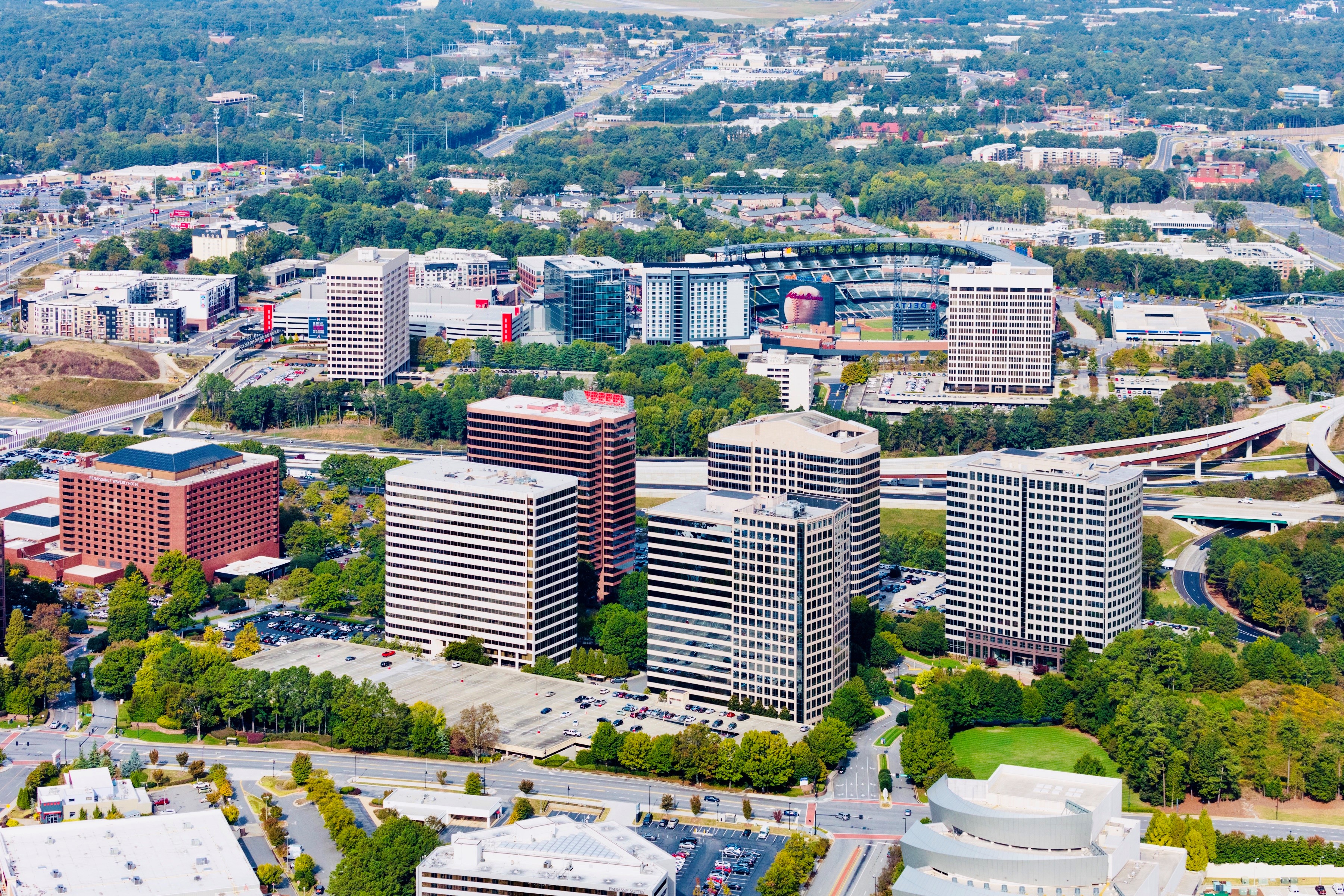 This is not to say Piedmont is without challenges. Smith says all office landlords are tested today by the impacts of the COVID-19 pandemic, as well as by rising construction costs and retention ratios hindered by tenants unwilling to live through a restack without benefits given in return.

To remedy escalating labor and material costs that diminish effective rental rate growth, he says tenant build-outs need to be more standardized or landlords must consider construction methods that are more cost-effective.

“It’s more important than ever to balance costs with a changing landscape in the office sector,” Smith says. “Our most important constituent group is our tenants; we will adapt and prudently reinvest to meet their evolving needs.”

Baird’s Rodgers says ground-up development for tenants on already-owned land adjacent to existing clusters is one of three avenues through which he expects Piedmont to grow. The other two are through the core portfolio, with increases in economic occupancy and the roll-up of in-place rental rates to market; and through active management of the portfolio, which includes selling higher-multiple properties for lower-multiple, higher-upside assets in targeted metros. “The combination of these growth drivers should also allow the company to reduce leverage and increase the dividend over time,” he adds.

Meanwhile, momentum continues across all aspects of Piedmont’s business. Growth opportunities remain in Atlanta, Boston, and Dallas, as does potential for ground-up development on parcels adjacent to holdings in several cities.

“Now, with our refined portfolio, we’ll also look to create additional value through redevelopment, as with our South Orange properties in Orlando,” Smith says. The company is also undertaking a master plan of The Galleria in Atlanta to bring new uses to the project, possibly hotel, multi-family, or retail. 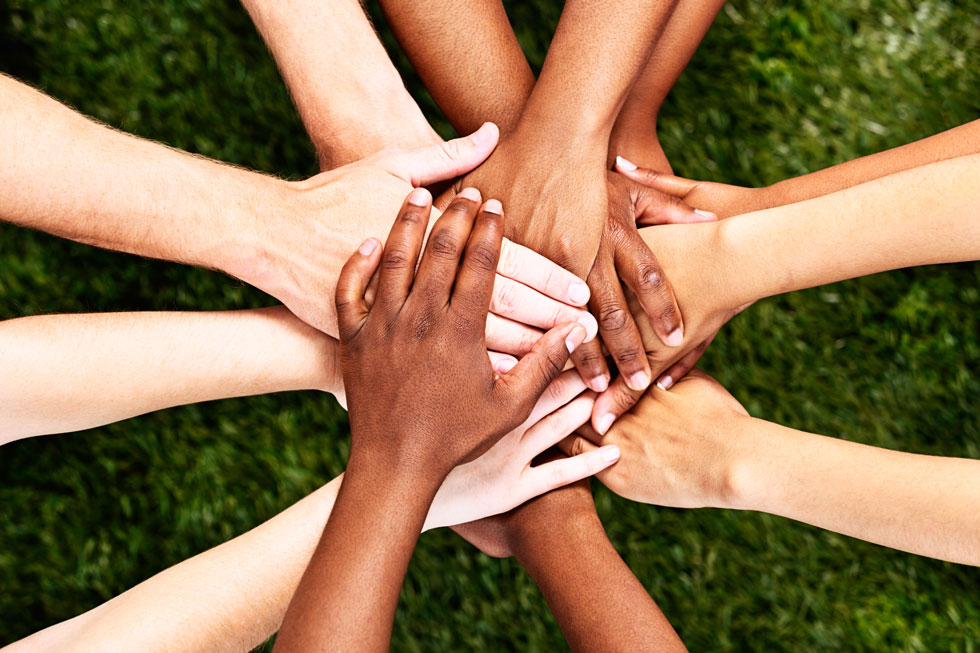 Piedmont will continue to promote its corporate values and nurture a workplace that makes equality, diversity and collaboration priorities, Smith explains. “We require all employees, tenants, and vendors to mutually respect one another’s diversity... this is imperative to maintain a cohesive work environment that fosters and promotes fairness and equal treatment; brings together people with varied and diverse backgrounds and lifestyles; and, exposes a talented workforce to a breath of viewpoints and perspectives,” he says.

As part of its efforts to condemn discrimination and prejudice, Piedmont has donated to the Brennan Center for Justice, the National Association of Criminal Defense Lawyers, the Anti-Defamation League, and the NAACP’s Legal Defense and Educational Fund, as well as other like-minded organizations aiming to tackle the problem of racial injustice.

The Future of Office in a Post-COVID-19 World

The coronavirus pandemic will accelerate many of the thematic trends that Piedmont was already witnessing and that had influenced its capital recycling strategy over the past four years, according to Smith. Those trends include: millennial family formation and migration away from the urban core; companies relocating to lower-cost, pro-business markets; and, companies establishing offices in amenity- rich, mixed-use environments to attract and retain employee talent.

Every 10 to 15 years the market experiences a shift in the function and layout of office space, Smith says. “We believe the pandemic is a catalyst for the next evolution in office space design, placing a greater emphasis on a work environment that enhances in-person collaboration and promotes a company’s corporate culture.” In addition, the post pandemic office will have a greater focus on technology to support a distributed workforce (as a result of increased work from home and hub-and-spoke office migration) and less reliance on mass transit for employees to arrive at the office, Smith says. At the same time, “we think the wellness characteristics of a building will be just as important, if not more, than its capabilities for sustainability and energy conservation,” he adds.

CEO Brent Smith said the REIT’s team developed its “Returning to the Workplace” guide over the last few months. 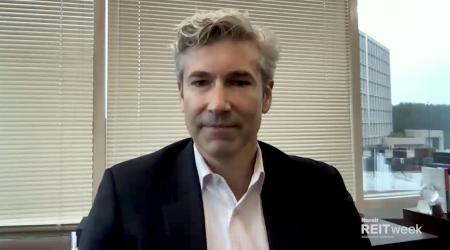