REIT share prices have often responded negatively to rising interest rates, at least since 2013. Is this warranted by the outlook for their future earnings? With the Federal Reserve announcing that its portfolio of Treasury and Agency securities will begin to shrink, and also reaffirming expectations that they will raise short-term interest rates further in the months ahead, the outlook for interest rates will remain a hot topic for the markets. Interest rates are one of the fundamental forces in the economy and financial markets, and there is a long historical record giving credence to the old adage, “don’t fight the Fed”.

REIT share prices have been more sensitive to interest rates since 2013 than they had been in earlier periods. There are many facets, however, to the relationship between interest rates and REITs. An examination of the different aspects of the relationship between interest rates, economic growth and share prices—in particular, the outlook for future earnings growth—suggests that the apparent concern by investors about the impact of rising rates on REITs may be overdone.

One complication is that sometimes economic developments drive interest rates, but at other times changes in interest rates drive the economic outlook. When there is news that the economy is strengthening, interest rates often rise on the anticipation of higher borrowing demands. The stronger economy, however, also implies rising earnings, and stock prices tend to move higher as a result (note that higher interest rates reduce the current value of discounted future dividend payments, which is unambiguously negative for share prices; earnings must rise by more than this discounting effect for share prices to rise).

At other times, however, it is interest rates that are changing the outlook for the economy. This typically arises when the Federal Reserve shifts its monetary policy stance from one designed to speed or slow the economy, or to maintain the current pace. In “Fed Speak”, these are shifts between stimulative or accommodative policy, restrictive policy or a neutral stance.

This raises the second facet of the relationship between REITs and interest rates, namely, which interest rates matter? Long-term interest rates and short-term interest rates may move on different timetables and have different feedback loops with the economy. The yield on the 10-year Treasury note often increases when economic activity strengthens—the first phenomenon described above. As a result, over much of the past few decades, REIT share prices have increased more often than not when the yield on the 10-year note rose, as all of these changes were taking place in an economy that was likely to provide rising earnings and future dividends.

On the other hand, changes in Fed policy are typically designed to slow or speed economic growth. When the Fed has been concerned that the economy was in danger of overheating, they typically raised rates higher to a restrictive policy stance. These actions usually resulted in slower earnings growth in the subsequent years, or even declining earnings. Share prices often declined during these periods.

But rate increases by the Fed are not always designed to slow the economy; sometimes their goal is to shift from boosting the economy—a stimulative policy stance—to letting it run at its current speed—a neutral stance. This is like a driver taking their foot off the gas pedal as they get up to highway speed; they don’t want to keep accelerating (and get a speeding ticket), but they aren’t putting their foot on the brakes, either. Increases in interest rates as the Fed moves from stimulative to neutral are often positive for share prices. The Fed’s current outlook for interest rates is for gradual increases to a still-low rate, consistent with their goal that the economy continue to grow as it has in recent years (chart 1 below). 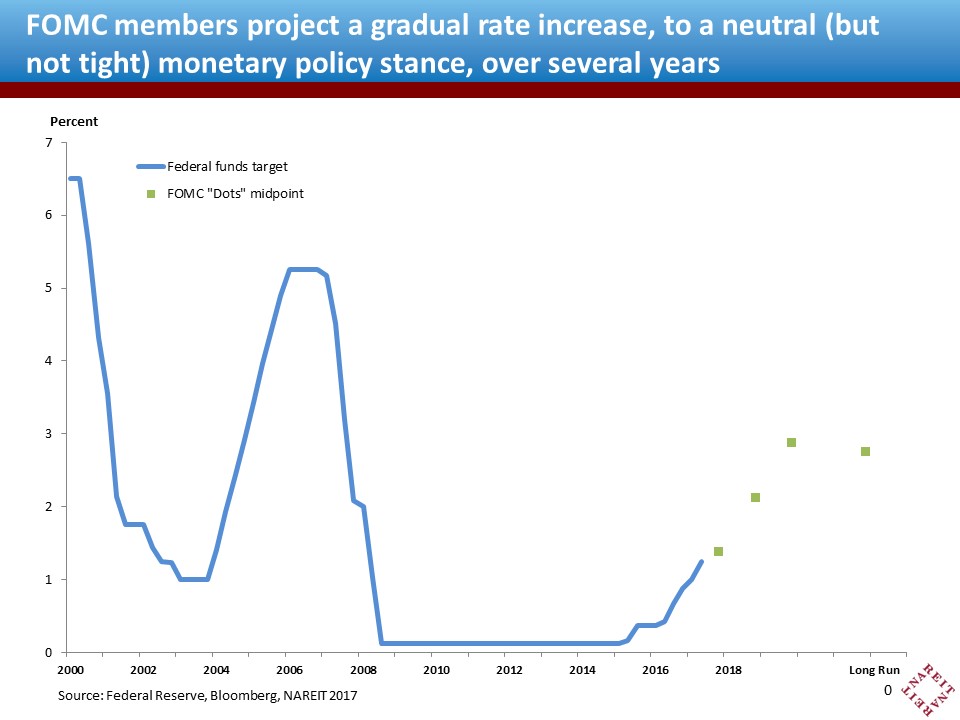 Share prices of REITs have been sensitive to changes in interest rates, at least until it became clear that the economy would continue growing; an initial negative response of REITs to interest rate increases has often been reversed as funds from operations (FFO) continued to rise. Two historical examples help illustrate this phenomenon—when the Fed raised interest rates 2004-2006, and the “Taper Tantrum” in 2013 when then-Fed Chairman Bernanke suggested the Fed would stop purchasing Treasury securities and Agency MBS for its portfolio. In each of these two episodes, the REIT market reacted negatively at first. The economy continued to grow, however, leading to stronger demand for commercial real estate and higher earnings for REITs. A rebound in REIT share prices soon followed. 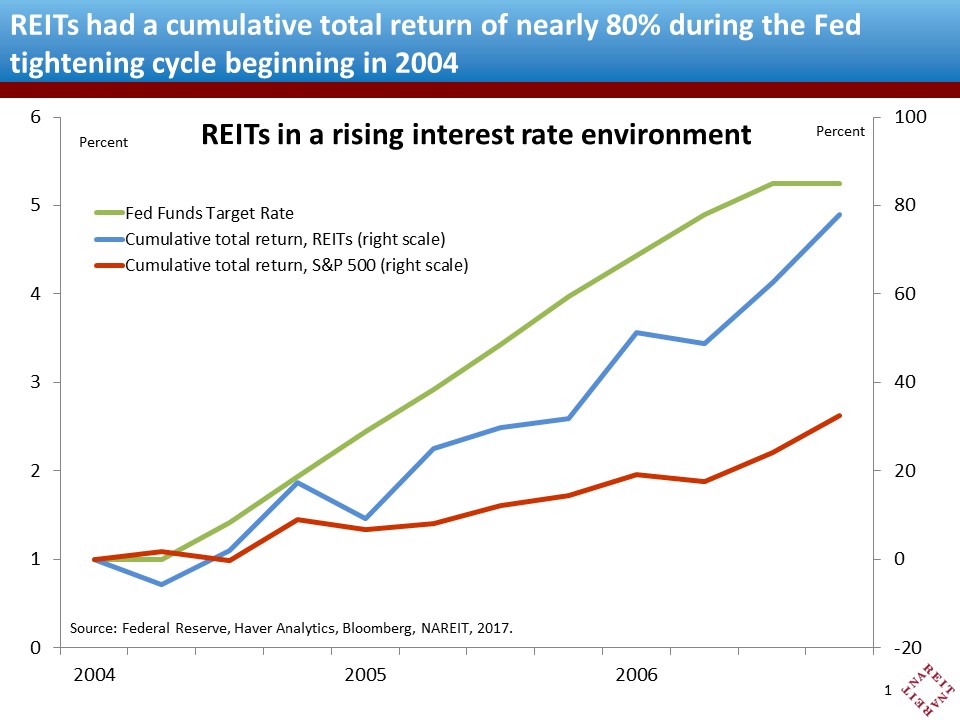 Chart 2 shows the solid gains following the initial drop in REIT share prices around the time the Fed began raising interest rates in early 2004. REITs delivered a total return of nearly 80 percent over these two years, far outpacing the S&P 500. This is an example of how REITs may outperform even during a period when the Fed is raising short-term rates. 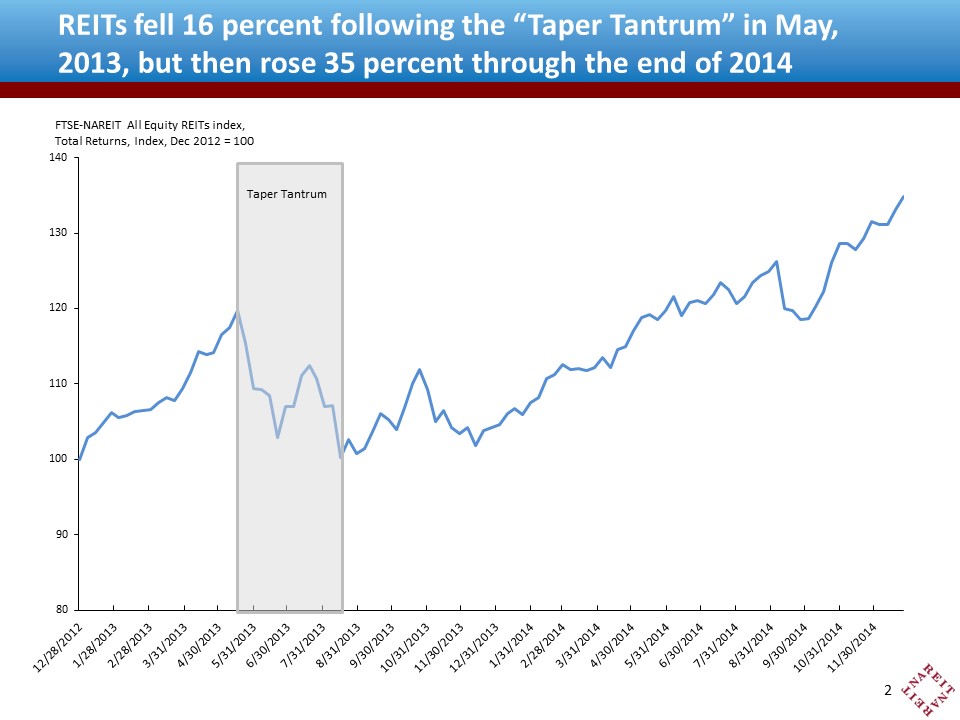 There was a similar initial negative reaction by REIT shares to the Taper Tantrum in 2013, which was also followed by a strong recovery. REITs had a total return of negative 16 percent over the two months following their peak just prior to then-Chairman Bernanke’s speech when he announced the Fed would soon taper off its purchases of Treasury and Agency securities. The downturn was short-lived, however. Share prices recovered over the subsequent months, and the FTSE-NAREIT All Equity REITs index posted a 28 percent total return in 2014, and finished the year 35 percent above the low reached in August 2013 (chart 3). As in the 2004-2006 episode, an important factor in the recovery was that REIT earnings continued to improve even as interest rates moved up.

REIT operating performance has been resilient even as the Fed has begun shifting gears. FFO has continued to climb and occupancy rates remain high. Meanwhile, REITs have reduced their leverage and locked-in financing costs with long term debt, minimizing the impact that a rise in rates will have on their interest expense. These improvements suggest that dividends paid by REITs will continue their steady rise. For the long-term investor willing to ride through the market’s short-term concerns during a shifting interest rate environment, the REIT market holds plenty of upside potential.