Comparing Real Estate Values in the Liquid and Illiquid Markets

In its most recent Monetary Policy Report submitted to the Congress February 14, 2017, the Board of Governors of the Federal Reserve System noted, “Commercial real estate (CRE) valuations, which have been an area of growing concern over the past year, rose further, with property prices continuing to climb and capitalization rates decreasing to historically low levels.”

Along similar lines, in August 2016 Michael Aked and Jim Masturzo of Research Affiliates published an article estimating that property values were inflated by 20% and predicting that, over the next 10 years, “real estate” returns would exceed inflation by an average of just 2.6% in their more optimistic scenario or just 1.4% in their more pessimistic scenario (“Next Season’s Meager Harvest in Commercial Real Estate”).  Mr. Aked and Mr. Masturzo based their analysis on data from the NCREIF Property Index (NPI) published by the National Council of Real Estate Investment Fiduciaries, which collects data on properties owned by or for institutional investors in the private real estate market.

I don’t have a problem with either the analysis or the prediction offered by Aked & Masturzo.  In February 2017, however, John Coumarianos published an article in the Wall Street Journal blog in which he tried to translate the Research Affiliates analysis for use by REIT investors.  Mr. Coumarianos assumed, in effect, that exchange-traded equity REITs are overvalued by the same 20% that Aked & Masturzo estimated for the private market, and came up with a prediction that REIT returns over the next 10 years would exceed inflation by an average of just 2% in the more optimistic scenario—or not at all in the more pessimistic scenario.

I think the translation offered by Mr. Coumarianos was off-base, because I think it’s clear that real estate assets are valued very differently right now in the liquid (exchange-traded) and illiquid (private) markets.  Put simply, Aked & Masturzo may well have made an accurate prediction for investors in private real estate, but I think it’s clear that a similar prediction for public real estate (exchange-traded REITs) is not supportable.

In the long run the public and private real estate markets move together: the assets are either the same (for example, a given property may be sold by an exchange-traded REIT to a private equity real estate fund) or very similar (for example, an exchange-traded REIT and a private equity real estate fund may own two similar office buildings on two corners of the same intersection).  Property values move up or down in response to the same set of return drivers including construction activity, employment growth, trade growth, mortgage underwriting criteria, and other demand or supply factors, no matter whether their owners are public or private.

Over short horizons, though, the values attached to properties on the two sides of the real estate market may move very differently.  For example, on February 7th, 2007 a private equity real estate fund managed by Blackstone paid $39 billion to buy all the assets owned by Equity Office Properties Trust (EOP), a publicly traded REIT.  Values in the liquid real estate market started declining the very next day—that is, Blackstone bought real estate, and EOP sold it, at the absolute high point of the market cycle, to the day.  Investment managers in the illiquid real estate market, however, continued to report increases in property values for more than a year—long enough, for example, for private-market investor Tishman Speyer to enlist Lehman Brothers to help it buy all the assets owned by Archstone-Smith Trust, another publicly traded REIT, for $22 billion—a deal that was delayed when the buyers encountered what one analyst called “rising turmoil” in real estate credit markets.  (Huh.)

At the time, observers wondered whether each deal happened more because the private-side buyers overvalued the assets or because the public-side sellers undervalued them.  It turned out, of course, that REIT investors won by selling at just the time when investors on the private side of the real estate market valued (or over-valued) their assets most highly.  That is, REIT investors gained from “public/private arbitrage,” meaning a difference in valuation between the public and private sides of the real estate market.

There’s a persistent, predictable relationship between the liquid and illiquid real estate markets: private-side real estate valuations respond more slowly to changes in market conditions than do public-side valuations, so the values in private, illiquid markets typically lag public market values by two to five quarters on average, depending on whether participants in private markets are evaluating market conditions by looking at completed transactions or at property appraisals.  Correcting for that lag can give you a pretty good sense of whether a public/private arbitrage opportunity has arisen.

A great example is the NPI, the private-side data source that Aked & Masturzo of Research Affiliates used when they judged that property values were inflated by 20%.  It turns out that a lagged moving average of the FTSE NAREIT PureProperty® Index (from the public side of the real estate market) bears a striking resemblance to values of the private-side, appraisal-based NPI.  Specifically, as Graph 1 shows, an index formed each quarter by averaging the daily values of the PureProperty index over the previous 7 quarters has had a correlation of 90% with the quarterly returns reported by the NPI over the 12½ years of available history.

The difference between the NPI and its exchange-traded REIT analogue provides a simple measure of how much disconnect there is from time to time between the public and private sides of the real estate market.  That difference suggests that private-side real estate was overvalued by about 12.3% as of the end of 2016, at least relative to public-side real estate (REITs).  That’s not as dramatic as the 20% NPI overvaluation that Aked & Masturzo estimated, but the particular values are not what’s important: the “REIT analogue” method I’m using here should be taken only as a rough guide, and I assume they would make the same point about their estimate.  What’s much more important is how rarely we’ve seen such a large difference between real estate valuations on the public and private sides of the real estate market: only once before has real estate in the public market seemed so undervalued relative to appraised values in the private market as it did at the end of 2016. 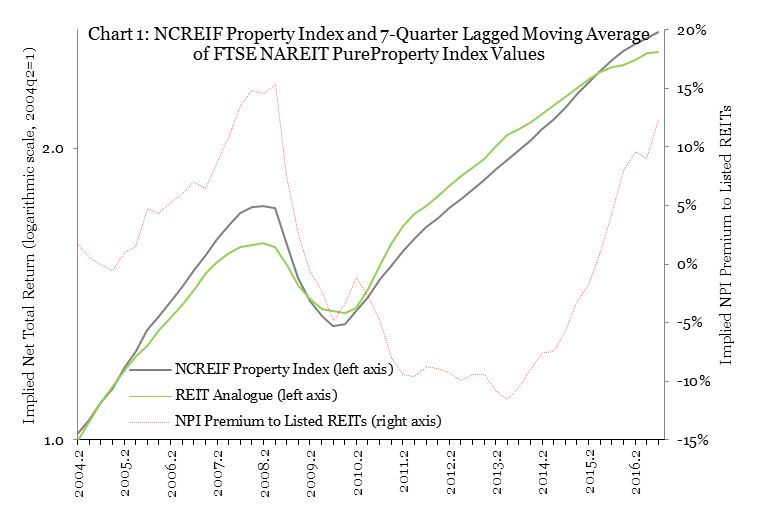 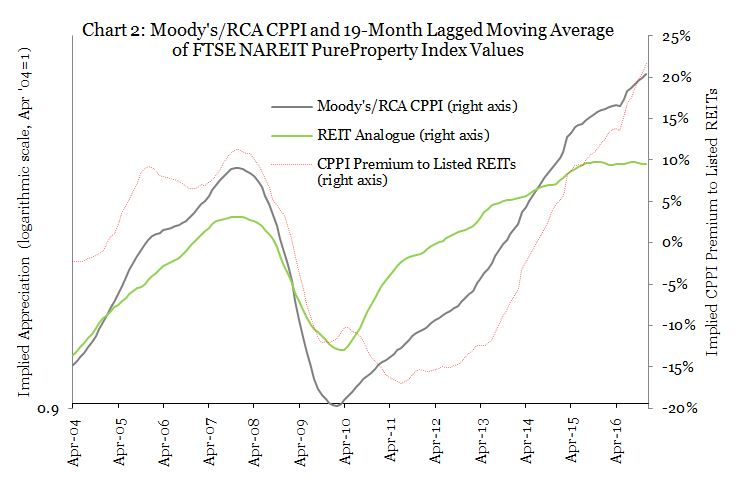 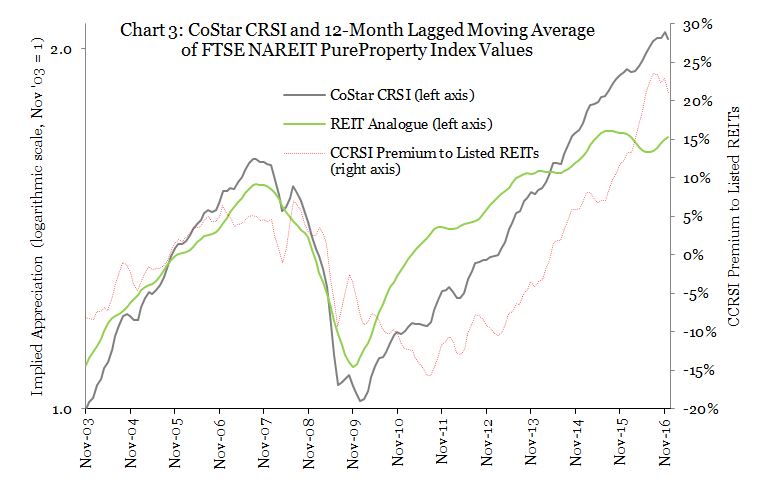 The public-private discrepancy may present multiple opportunities for REIT investors.  For example, the difference in valuation is one reason that some equity analysts have predicted an increase in acquisitions of exchange-traded REITs by private equity real estate investment managers during 2017: valuations on the private side of the real estate market are extraordinarily high—at least relative to exchange-traded REITs—so private-side investment managers may deploy their capital by acquiring REITs.

Another scenario may be even more likely: the folks who manage exchange-traded REITs may simply take advantage of the public/private arbitrage to sell some properties into an inflated private market and use the capital for more productive investments.  Put simply, exchange-traded Equity REITs have a long history of taking advantage of the public/private arbitrage to sell assets at inflated prices, often buying them back later when private-side valuations have descended too far.

What’s a REIT investor to do when properties seem overvalued on the private side of the real estate market but there’s clearly a disconnect with the public side?  Other valuation metrics can definitely help.  Recently I’ve published a series of market commentaries showing how investors can use the average REIT dividend yield spread to Treasury bonds, the average dividend yield spread to corporate bonds (both high-quality and below-investment-grade), and the estimated REIT stock price premium/discount to NAV to develop predictions of future returns to exchange-traded Equity REITs, as well as predictions of the future outperformance of REITs relative to the rest of the U.S. stock market.  A very strong theme of those analyses is that exchange-traded REITs seem dramatically undervalued relative to those metrics, which have proven to be useful in the past.

It’s difficult to tell whether the main reason for the disconnect between public and private real estate primarily reflects overvaluation in private markets, undervaluation in public markets, or a little of both.  It’s much easier to discern that the same movie is definitely not showing in both theaters.