Coronavirus and the Economy: The Impact Spreads

The advance of the coronavirus within the United States has prompted a corresponding spread of actions aimed at slowing the pandemic. This includes cancellation of many public activities, including sporting events, Broadway shows, schools and colleges and more. As we discussed in a commentary last week, we had anticipated these types of activities would be among those first affected by the health crisis (See, The Coronavirus, Commercial Real Estate and REITs). The new travel ban on travel and some trade from Europe will almost certainly amplify the impact on economic activity.

These actions will cause a noticeable reduction in GDP, but how large might it be? Total spending on transportation and recreation services in 2019 was $1.065 trillion, or 5% of US GDP of $21 trillion. Not all transportation and recreation will be cancelled, of course, and it is not yet clear for how long such activities will be suspended. If one assumes a reduction of one-quarter of all spending on transportation and recreation for two months this would subtract between three-quarters of one percentage point and one percentage point from GDP growth. If one assumes a similar reduction in spending on food services, which was just over $1 trillion in 2019, total GDP growth would slow from the 2.1% annual rate in the fourth quarter of 2019 to something around zero by the second quarter of 2020.

Chart 1 show the components of GDP. 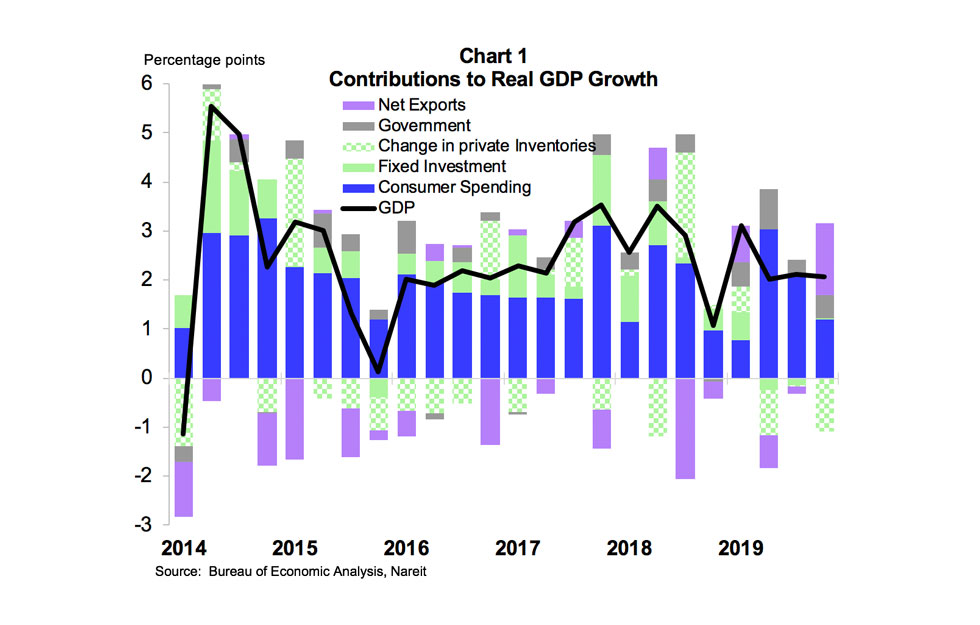 Other activities will also be affected, including reduced consumer spending, housing starts and other construction activity, and possible factory closings. It would not be surprising to see negative GDP growth in the spring quarter. Yet, many of these activities may return to previous levels once the health crisis is contained, leading to a rebound (though perhaps not complete recovery) in the third quarter.

Will this result in a recession? It is growing increasingly likely that it will. The National Bureau of Economic Research (NBER), the official arbiter of economic expansions and recessions, defines a recession as “a significant decline in economic activity spread across the economy, lasting more than a few months.” The period ahead will almost certainly see a “significant decline” and it will be across the economy.

It is unclear, however, whether the slowdown will last “more than a few months.” Moreover, the NBER also states that “[i]n both recessions and expansions, brief reversals in economic activity may occur… an expansion may include a short period of contraction followed by further growth.” If the health crisis were to be brought under control quickly, we could also see economic activity recover quickly. If this were to occur, the NBER may decide the slowdown does not meet the formal criteria for a recession.

There is more than semantics at play. A longer and deeper slowdown generally triggers second- and third-round effects, as business closures and layoffs reduce household incomes, prompting cutbacks in consumer spending, which in turn generate another round of production cuts and layoffs. The good news is there is no sign to date of the current health crisis moving beyond the first-round effects of avoiding activities that involve crowds and public places.

The next few months will be challenging for REITs, as well as nearly all other sectors of the economy. REITs were in a solid position as this crisis hit, however, with record earnings in the fourth quarter of 2019, high occupancy rates and strong balance sheets (see the Nareit T-Tracker® for full details, including downloadable spreadsheets and charts).