One of the more interesting developments over the past decade has been the evolution of how real estate is used by businesses and consumers. There are few sectors that exemplify these changes better than Infrastructure REITs, which own and operate cell towers, and Data Center REITs—which own modern commercial real estate that, paradoxically, is associated with hosting “cloud” computing. Data centers house the servers and network equipment that make modern communications possible, including the Internet and data transmitted by cell phones. Let’s take a more careful look at the Data Center REITs and the properties they own and operate.

These facilities are commercial properties with electrical power and cooling systems designed to keep running through any type of emergency. In fact, the ability of Data Center REITs to keep communications networks operating in Houston, even when Hurricane Harvey had flooded much of the city, facilitated rescue efforts throughout the region, and saved many businesses from losing critical contact with customers and suppliers. (See how Data Center REITs helped keep the critical communications infrastructure running when most of the rest of the region was shut down in this New York Times story.

REITs are prominent among the major operators of data centers, and have grown rapidly over the past decade. REITs owned and operated 230 data center facilities as of 2016, compared to 53 REIT-owned data centers a decade earlier (chart 1). The value of the REIT investment in this sector has risen accordingly, with the historical cost of all data centers owned exceeding $20 billion, compared to less than $2 billion in 2005 (the historical cost reports the acquisition price and does not reflect any subsequent price gains; the current value of these holdings has likely risen further. Indeed, the combined equity market cap of Data Center REITs exceeds $70 billion). 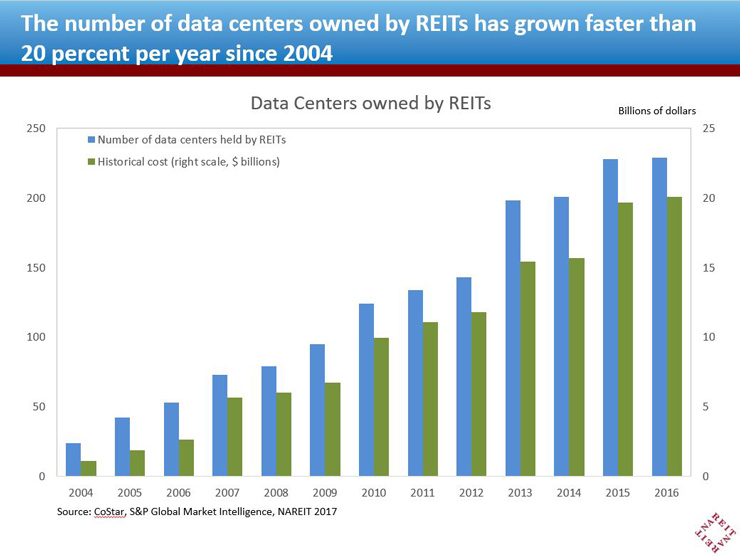 Like other types of real estate, location matters, and three-quarters of the investments in data centers by REITs are in or near the top half-dozen metro areas. Northern Virginia is the largest data center market in the country, with several major telecommunications companies operating in that region. San Jose and Silicon Valley are a close second, with Chicago, Dallas-Fort Worth, New York and Phoenix rounding out the top six (chart). 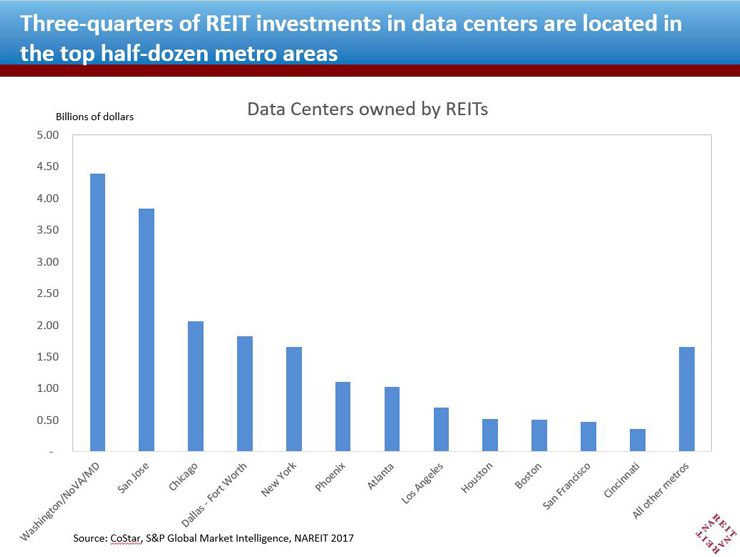 Operating performance of Data Center REITs has been exceptional. Funds from operations (FFO) of the sector was $670 million in 2017:Q2, representing a nearly 30 percent annual growth rate over the past four years, according to the NAREIT T-Tracker®. Data Center REITs paid $470 million in dividends in the second quarter, and have paid a total of $5.2 billion in dividends over the past four years. This performance has not gone unnoticed by investors. Data Center REITs delivered a 26.4 percent total return in 2016, a close third among all REIT sectors, behind the Single Family Home REITs and Industrial REITs; Data Centers posted an additional 31.8 percent total return through August of 2017, second only to Infrastructure REITs. (The full table on total returns is available here) 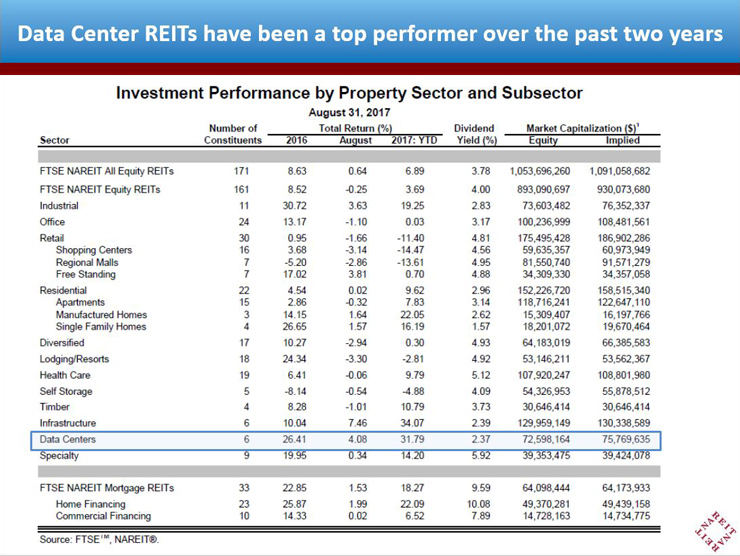 The key question for the sector is, how long can such rapid growth continue? While double-digit expansion must eventually taper off, there are no signs of any cooling of growth trends in Internet traffic and data transmission anytime soon. Cisco projects both business and consumer traffic to grow 20 percent or more per year for the next four years, which will generate further rapid growth for the servers and network equipment that host the cloud—here on solid ground, in REIT Data Centers (chart). 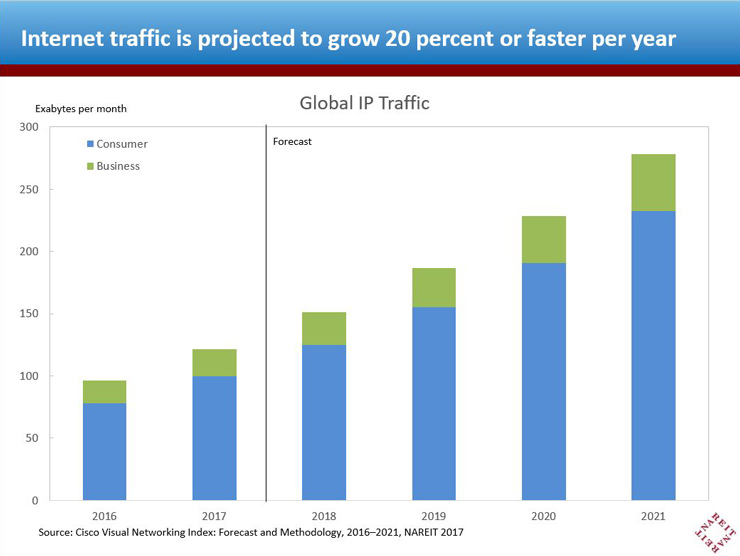