Expansion and Growth of REIT Earnings

REITs have posted solid gains in earnings in recent years. Funds from operations (FFO) rose 5.5 percent in the second quarter of 2018, to $16.4 billion, for a cumulative increase of 55 percent over the past four years. There has been a similar rise in net operating income (NOI). Recent annual increases have been in the mid-single digits, which is a healthy pace of growth, but a slowing from the growth of 20 percent and higher between 2014 and 2017. (See the Nareit T-Tracker® for data on FFO, NOI and other measures of REIT operating performance.)

What accounts for the slowdown in earnings growth? To answer this question, we must first examine the factors that have contributed to the historical uptrend in earnings. Let’s break out the growth of overall NOI of listed REITs into three components: 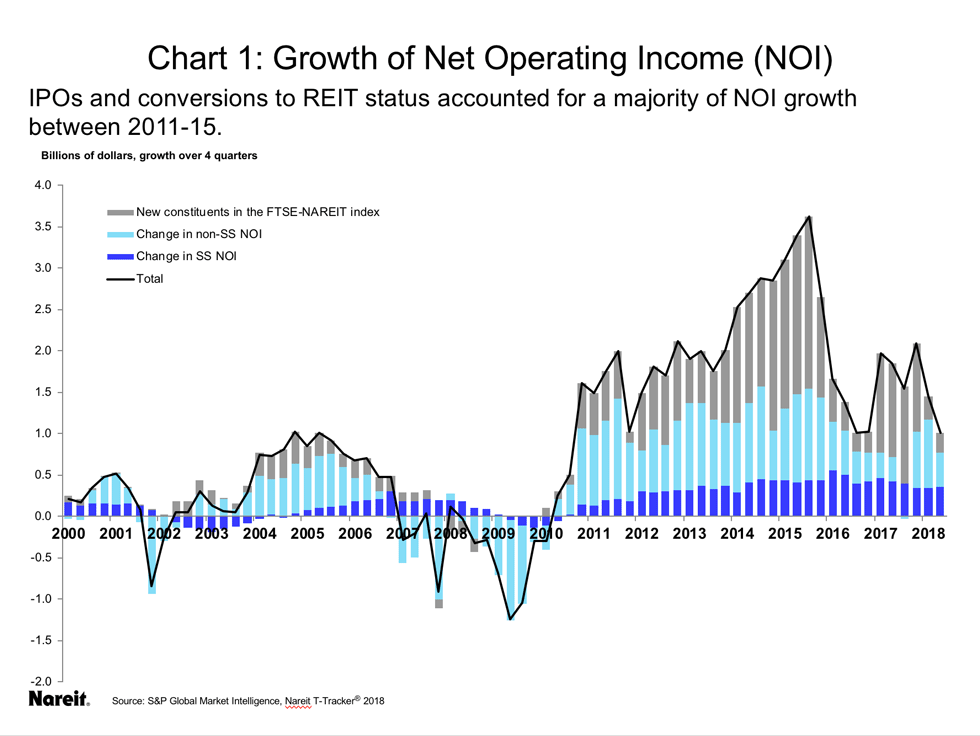 Chart 1 illustrates the contributions to total NOI growth from each of these sources. Between 2011 and 2015, there were 48 REIT IPOs and 11 companies that converted to REIT status. Over this period, new REITs accounted for $4.9 billion additional NOI (grey bars in chart). 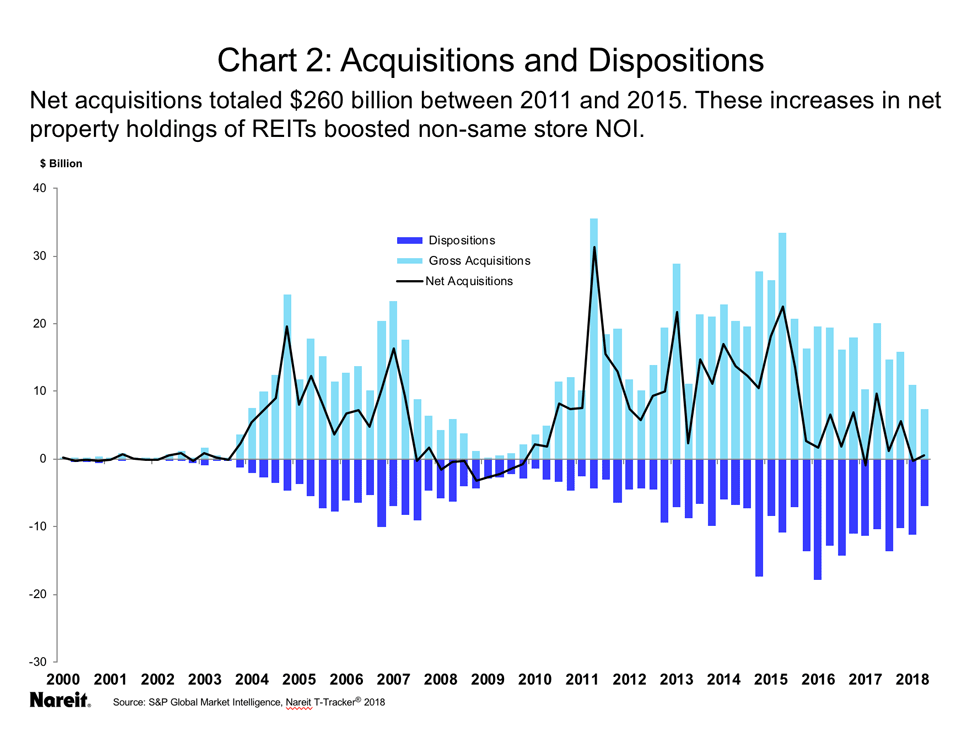 The second-largest component of NOI growth between 2011 and 2015 came from acquisitions by existing REITs that increased their holdings of income-producing real estate. Net acquisitions over this period totaled $260 billion. These acquisitions added $3.2 billion to NOI (light blue bars in chart 1). Net acquisitions slowed to $32.9 billion in 2016-2017 and accounted for an additional $1 billion of NOI, and were essentially zero in the first half of 2018. 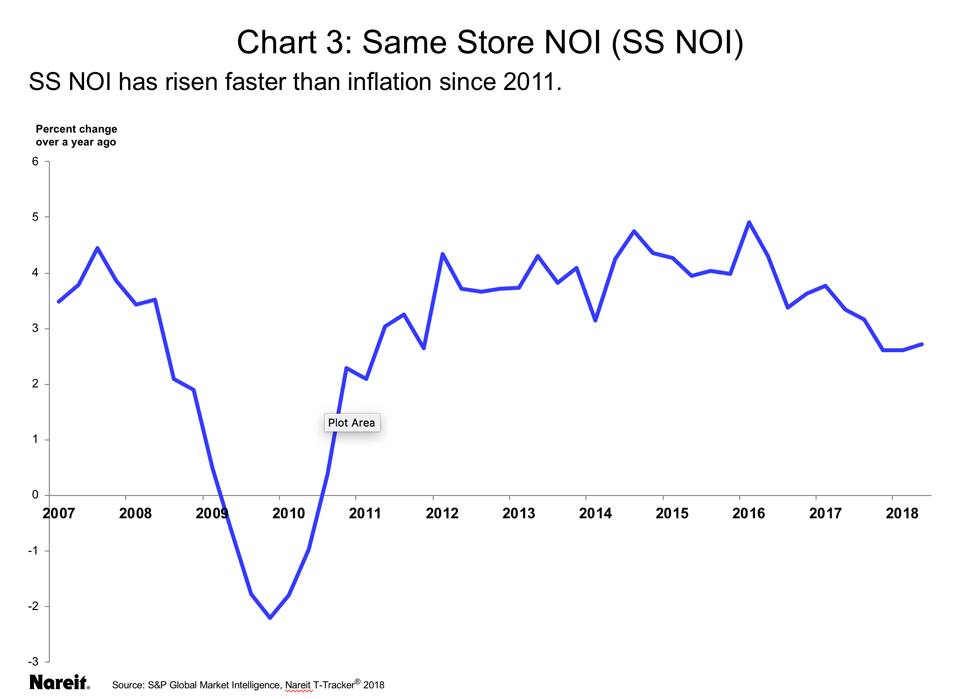 The final source of NOI growth is from rising earnings from existing properties, that is, same-store (SS) NOI. From 2011 to 2015, SS NOI increased at an average pace of 4.0 percent, and existing properties in REITs’ portfolios generated an increase of $1.6 billion of NOI, which was just one-sixth of the total gain. Growth of SS NOI decelerated in 2016-2017, however, to a 2.6 percent rate, before ticking up a bit in 2018. 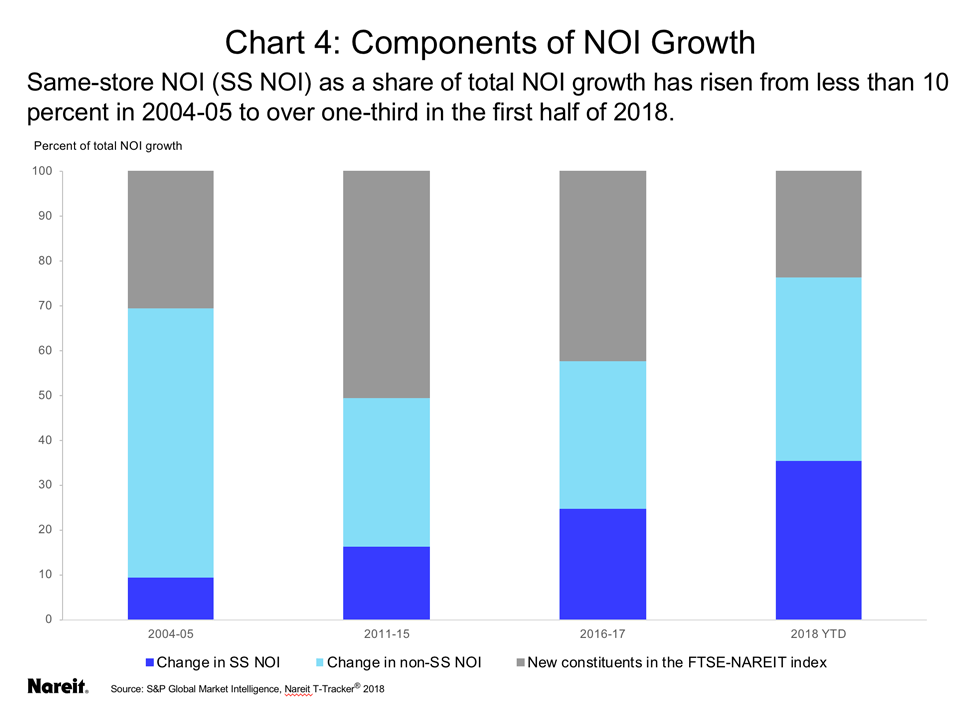 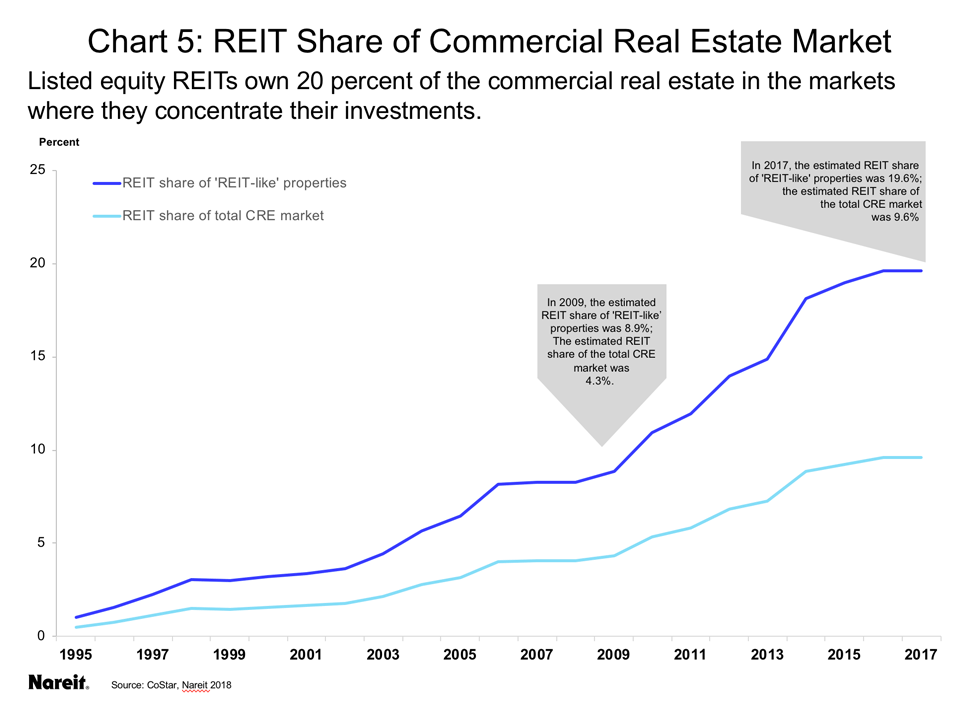 The first two components of growth of NOI—new listed REITs due to IPOs and conversion to REIT status, and net acquisitions by existing REITs—represent expansion of the total amount of commercial property held by listed REITs. This expansion is part of a longer-term rise in the share of all commercial real estate that is held by REITs, from a minor amount in the early 1990s (prior to the start of the Modern REIT Era) to a 20 percent share today of investment grade properties. These external sources of growth have slowed as increases in REITs’ cost of capital damped the pace of IPOs and acquisitions by the sector. The third source of growth, however, represents organic growth in a healthy REIT sector. The steady increases in SS NOI at a pace above the inflation rate should continue to drive earnings, and valuations, upward in the future.